Karen C. Whalen shares an embarrassing moment today (I love embarrassing moments!) Fortunately, she was able to turn something embarrassing into a funny scene in her soon to be released cozy mystery, NO GRATER EVIL, Book 3 in her Dinner Club Murder Mystery series. Tell us your story Karen!

The most embarrassing moments make for the best scenes in books. Readers love the scene and can relate to it, and thus love the character.

Oh my God, you have to hear what happened to me!

Haven’t we all said that? Not once, but many times, as we feel the need to retell our embarrassing moments to our friends. Why does one feel the need to retell it? Because we have a chance to rewrite our story, tweak it, make it funnier and not so horribly uncomfortable, to gain empathy, and best of all, to get a laugh. Retelling the story as if it happened to someone else, a character in our books, is even better.

Deciding which is my most embarrassing moment is hard since I have many. I’m one of those folks who stumble through a series of socially awkward moments that make up the sum total of my life…probably why I’m a writer, an occupation for loners. But, okay, I can come up with one pretty good example that I wrote into the third book in my dinner club murder mystery series, No Grater Evil, to be released this fall.

This is my embarrassing moment: I was driving my friend Sunny through Breckenridge, Colorado looking for a place to park so we could go shopping while our husbands golfed. We both spotted a parking lot on the other side of a wooden bridge. I turned onto the bridge. To be fair, and pass the blame, Sunny said, sure, try that, as she clutched the dashboard with white knuckles. The narrow bridge did not feel very sturdy, and on the other side was a wide sidewalk rather than a road. So, I turned the car down the sidewalk and kept going. A man in a chef’s hat ran out from the back of a building on the other side of the walkway with his arms flailing, yelling “Stop!” He explained that we were on a pedestrian/bike path (duh, of course we were) about to drive into the wedding he was catering. Sunny and I both peered to the end of the walkway and saw chairs set up and lots of activity. I thought about driving around the chairs because it was impossible to turn around on the narrow bike path. 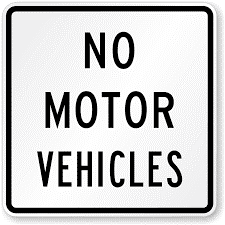 Near tears, I asked him what to do. Another man appeared and one stood in the front of my car and one at the back as they directed me through a 3-point turn around that ended up being about 20 points of reverse and forward. I should mention that the bridge went over the swift running Blue River and that my rear tires were dangerously close to the river bank. And that I was driving my husband’s car, a long, very long, looong vehicle, and that I’m used to my cute little, little as in short, Ford Fiesta. (In the lime squeeze color, that my husband calls lime slime, but it’s so cute! And short). Half way through the turnaround I asked the chef if he would take the driver’s seat and turn the car around for me, but he assured me I could do it. I did. But I did not want to drive back over that pedestrian bridge. So I drove with my friend Sunny (we’re still friends, by the way) in the other direction until we came to a heavy metal barricade. We both jumped out of the car, with superhuman strength moved the barricade out of the way, and drove into the parking lot. (This is reminiscent of the scene in the movie Christmas Vacation when Clark Griswold drives out from under the semi-truck into the parking lot of the Christmas tree lot like it was all planned to happen that way.)

All-righty, then. Is that a great story, or what? I swear it really did happen exactly that way and it fit perfectly into the book, which even has a character that is a chef!

This is the scene in the book. I changed the location to Estes Park. Please note that Olivia has been arrested for murder and is out on bail while Jane tries to solve the crime.

“Turn here and go over that bridge.” Olivia waved her manicured hand out the window.

Jane braked the car. “The bridge looks too narrow.”

“There’s a parking lot over there on the other side of the trees. Go ahead.” Olivia clutched the dashboard, craning her neck to see past the end of the bridge. Jane turned the car onto the wooden structure, barely fitting between the railings. As the wheels passed over the wooden slats, they heard a clickety clackety, as if each board was popping up like piano keys during a glissando. Once across, they found themselves on narrow pavement.

“This must be a one-way road. There’s not enough room for two cars,” pointed out Olivia.

“But there’s no sign that says ‘one-way.’ I don’t have a good feeling about this.” Jane rested her hands on the steering wheel wondering where she could turn around.

“Keep going. We can park over there.” Olivia motioned to the left through the sparse woods. A parking lot abutted the back sides of several buildings. But how to get over there?

A man ran out of the trees, yelling and flapping his arms over his head. “Stop! Stop! You can’t go this way.” He was wearing a white, double breasted shirt and white toque. Jane stomped on the brakes and rolled down her window. “Everett.”

“Jane?” Her former boyfriend skidded up to her car, almost bouncing off the door. “What in the world are you doing here?” His mouth fell open as his question hung in the air.

“We’re in Estes for the weekend. What are you doing here?”

“I mean, what are you doing driving on this bike path?”

“We’re just heading to the parking lot over there.” Jane twitched her thumb in the direction of the trees. “What’re you doing? I thought you worked in Vail.”

“I’m catering the wedding you are about to drive into.”

“What did you say?” Jane widened her eyes. “What bike path?”

“This bike path you’re on.”

She peered down the paved path to where the cement curved and a woman wearing a long, white gown and veil stood with her groom in front of rows of ribbon-bedecked chairs. A photographer was capturing the happy couple on film. Jane’s eyes darted over to Olivia who shrugged her shoulders. Her voice came out shaky and halting. “What should I do? I can’t turn around here.”

“Return the way you came in.”

“I’m afraid to go back over the bridge.” Jane gripped the sides of her head and pinched her eyes shut.
Olivia pointed through the windshield. “If you drive up to the curve in the path, there’s space to turn around.”

“You can’t do that. They’re taking the wedding pictures. You have to back up.” Everett’s small blue eyes flashed.

Jane jerked the car into gear, but only pressed her foot lightly on the gas pedal to move the car forward. Everett walked with big strides alongside the car, as Jane carefully maneuvered to the curve. He positioned himself at the tail end of the car as she attempted a three-point turn around. He held up his hands to give directions, and she inched the car first forward then backward, to swing in the other direction. As soon as she had the vehicle pointed the opposite way, she said, “It was nice seeing you again, Everett,” then screeched out of there.

Instead of returning over the bridge built to carry people only, she continued down the pedestrian path until they came to a metal chain barrier blocking the way. On the other side of the barrier was their destination, the store parking lot.

Olivia, who had been silent this whole time, asked, “What now?”

Jane risked a backward glance over her shoulder to see Everett and the bride watching them. The woman’s fist was raised in the air, and her mouth was formed into a snarl. “Come with me.” Jane leaped out, leaving the car door yawning open, and Olivia did the same. They sprinted over to the barrier. Jane, taking one end with Olivia at the other, dragged the heavy metal structure to the side of the path out of the way. They both hurtled to the car to speed over to the parking lot. Jane drove to a close spot right next to the store entrance, and they beat a quick path inside. She breathed a shaky sigh of relief. “I wonder if we’ll get in trouble for driving over the bridge.”

“What are they going to do, arrest me?” Olivia put her hand on Jane’s arm and sagged against her. Out of her mouth came, “Hee hee ha ha HA HA!”

You can see how the story wrote itself. Maybe that’s why authors include embarrassing moments in their books. They are easy to write. I’m not sure I’m completely recovered from that experience, but if I made a reader chuckle, and I made my word count for the day, than it was worth it.


BLURB for NOT ACCORDING TO FLAN:

Jane Marsh wants to shake off the empty nest syndrome, plus the notoriety of the death of her first and second husbands, by starting over in a new place. She sells her family home to move to a far northern suburb of Denver. At the same time, Jane's dinner club is undergoing a transformation, and a new man—a gourmet chef—enters her life. But, things turn sour when, on the day Jane moves into her new home, she discovers a dead body. She cannot feel at home in this town where she’s surrounded by cowboys, horse pastures, and suspects. Not to mention where a murder was committed practically on her doorstep. How can she focus on romance and dinner clubs when one of her new friends—or maybe even her old ones—might be a murderer? 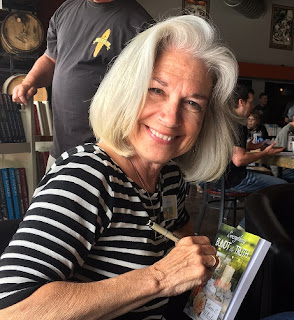 Karen C. Whalen is the author of the Dinner Club Murder Mystery series. She worked for many years as a paralegal at a law firm in Denver, Colorado. Karen has been a columnist and regular contributor to The National Paralegal Reporter magazine. She is a member of Sisters in Crime and participates in a local writing group, the Louisville Writers Workshop.  In addition to hosting dinner club events (although, murder was not involved), Karen loves to hike and bike ride under the robin-egg blue skies of the Colorado Rocky Mountains. 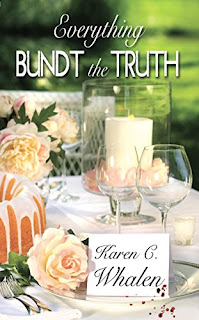 First book in the series, Everything Bundt the Truth 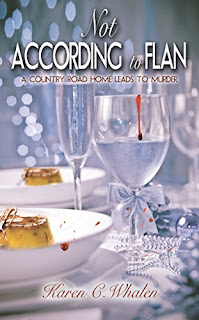 Second book in the series, Not According to Flan

Email ThisBlogThis!Share to TwitterShare to FacebookShare to Pinterest
Labels: cozy mystery, Everything Bundt the Truth, humorous mysteries, Karen C. Whelan, No Grater Evil, Not According to Flan, The Dinner Club Murder Mysteries, The Wild Rose Press