Cj Fosdick, a fellow Wild Rose Press author, is my guest today. Cj's "Accidental Series" is all about time-travel, one of my favorite tropes. The first book in the series, The Accidental Wife, is on sale for .99 cents until August 31. Please welcome Cj Fosdick! 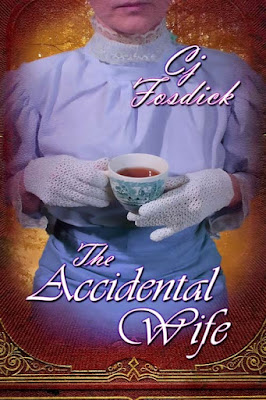 Where did you get the idea for your novel?

Ideas for my own multi genre American family saga were popping like popcorn in a microwave as I read Diana Gabaldon’s fantastic Outlander series (over a year). Diana herself inspired me when I met her at a HNS Writer Conference in Florida four summers ago.

For me, reading a good historical romance or mystery is “armchair time-travel” at its best. Time-travel has built-in suspense, drama and a unique opportunity to compare eras. Add a mysterious family legacy, diverse charismatic characters, mistaken identity and a breathtaking romance and you have a recipe for The Accidental Wife set in Wyoming.

There were several odd coincidences that made me feel writing this book was karma!  As I sorted old photos of my stepmother after she died last year, I found black and white photos of her and my late father on a honeymoon trip out West. They posed at old Ft. Laramie in front of the 1870 Burt house, which played a key role in my novel. My stepmom loved my book, but never mentioned she was actually at Ft. Laramie in 1954.

After winning a Western Union writing contest at age 12, my avocation was set. I blew the $5 prize on candy dots to share with friends and loved the celebrity. Passion to write was etched in stone when I became feature editor of my H.S. newspaper and wrote a teen column for small newspapers in Milwaukee.

There’s a network of social media at your fingertips today: Articles, blogs, webinars, reader and writer groups on Facebook, Linkedin, Twitter, Goodreads, Pinterest, etc. Plan for half your time to be absorbed with marketing. A website and FB following is as essential as good navigation skills on social media. I learned a lot about the publishing climate and pitching my work at Writer Conferences. I also joined groups like RWA, Women Writing the West and the Historical Novel Society to network and cover my genre interests. The conferences and the RWA magazine also offer contests which can benefit you with honest assessments of your talent, and if you place or win you can add that to your resume and bio. A critique group of writers can also help shape editing skills and toughen thin skin. Use spell check, research every fact and setting and edit your writing even before you invest in a good editor. Motivation and Persistence equals Discovery!

When were you first published and how did that happen? Was it a long or short journey?

For decades, I managed to produce only short stories and articles. Time to write a novel was always elusive. Some of my stories won awards, however, and at a Women Writing the West Writer Conference in Kansas City 4 years ago, I placed in their Laura contest. The judge encouraged me to turn the story into a novel and my future publisher was in the audience. She encouraged me to send that potential novel to her. I didn’t waste any time and less than a year later I was contracted by Wildrose Press for “The Accidental Wife.”

Both, but more pantser than plotter, I think. My characters have input and sometimes they take me down a pathway I didn’t plot.

What do you hope readers gain from your stories?

Besides a page-turning read, I hope my readers learn that love is timeless, and no obstacle is impossible if your heart and soul are open to the challenge. I love to add suspense with unexpected twists and turns and enough social awareness and diversity to tease thought after the last page is read.

I hate eggs; never eat them. Though I also have a fear of heights, I climbed a waterfall in Jamaica and bent backwards over a sheer drop to kiss the Blarney Stone in Ireland.

My new Amazon Echo is helping out with quick research questions. “When were chocolate chips invented?” When the answer was needed for scenes in The Accidental Wife, it took more time to check with Google and Wikipedia than simply asking Alexa--who also plays my favorite music while I write.

What’s your least favorite thing about being a writer?

I love everything  except   MARKETING—which gobbles up WRITING time!

I’ve lived in Rochester, MN for most of my life, but I was born and raised in Milwaukee, WI. For 30 plus years I wrote and published stories and articles until my debut novel was published in 2015. I celebrated that inevitable milestone by getting a red Rav 4 with a vanity license plate that reads “Novel CJ.” 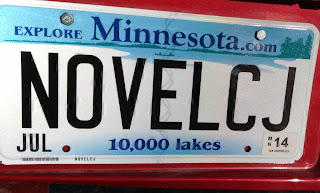 Animals. We raised or trained 19 horses (including 2 wild mustangs) and have had 12 dogs and cats, many of them rescues. I gave riding lessons for 15 years, but sadly gave up riding for writing full time. With an empty barn now, I’ve resorted to feeding deer, turkeys, birds, and other wildlife just outside my writing room.

TV and email are bittersweet necessities. My inbox grows daily!

What do you like best about your hero from The Accidental Wife?

Mitch is a half breed who grew up well-educated in two worlds. He is tall, athletic, and charming, with mesmerizing green eyes that reflect his emotion. He’s also a great father and can easily match wits with the heroine, yet uniquely vulnerable to his place in life and love.

What do you like best about your heroine from The Accidental Wife?

Jessica comes from a line of strong, independent women that began with her infamous great great grandmother and the legacy she found back in 1875. She is smart, practical and curious, but also vulnerable to relationships since she was orphaned and later betrayed in a bet. Her wit and smart mouth serves her well. She also looks like her famous ancestor…and me on better days.

How do you choose the names and physical characteristics of your characters?

Important to me! I often choose names of my characters based on the first or last name of friends or family. In the Ireland part of book two in the Accidental Series, I used a book of Irish names. I spend days mulling over how the names sound and how they go with the characters. My long time historian connection to Ft. Laramie was Sandy Lowry. She became a character in both books--named Stella Lowry. Sandy laughed at that, as her mother-in-law was named Stella Lowry. The physical characteristics of my characters also match people I know…or favorite actors and actresses.

The Accidental Heiress is set in Ireland with main characters who played minor roles in Book 2, The Accidental Stranger. The plot involves an Irish scandal that turned women into slaves for centuries and is still being litigated today in Ireland. As in all my books, I love adding an appetizer of social justice to the meat of the plot.

“Lost in time, found by love.”  This applies to both hero and heroine in both novels, as they were vulnerable to time and circumstances that was altered by the healing power of love.

The Accidental Wife was the mainstream series debut but all the Accidentals can stand alone, unless your curiosity is peaked. Characters in both books will appear throughout the series, but minor characters from Book 2 will be elevated to major roles in Book 3—The Accidental Heiress.

Is there anything we haven’t covered here that you’d like to tell readers?

The Accidental Wife is a Golden Quill finalist and was a Top Ten P & E Winner for Best Romance and Best Author in 2015. This is the first time the eBook has gone on sale for .99. The Accidental Stranger is the sequel published this year. 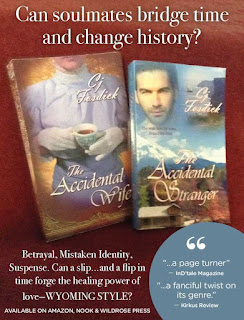 How can readers reach you online?

Blurb for The Accidental Wife:

Self-determined Jessica Brewster is wary of any emotional relationship after being betrayed in a bet. When the beloved grandmother who raised her dies, she inherits a mysterious teacup which transports her back to 1886 in old Fort Laramie, switching places with her look-alike great-great grandmother--wife to her ancestor's magnetic first husband and mother to his charming nine-year-old daughter.

Can she pull off the charade and find a way back, or will conscience and her twenty-first century "slips" expose her identity?  As true love--and a gypsy--derail her plans, her ancestor's brother shows up with his own dark secret. Is her future in the past? Her decision could save her legacy...and her life!

He rose from the chair like an old man and touched my face with both hands, feathering his fingers lightly across my forehead, into the wells of my eyes, over my nose and cheekbones, like a blind man needing to know who stood before him. I tried not to stiffen at his touch, willing myself not to blink, not to release the fresh tears that had begun to pool. He collared my throat with his long fingers and ran a thumb over my lips. “I want my wife back. Come back to me, Mitawin,” he whispered.

The word on the teacup; the hallmark of my deceit. Our eyes locked, and I felt my throat closing and my knees begin to quiver. For a few seconds his grip tightened around my throat, and I clamped my eyes shut with a fleeting thought. Yes, take my breath...end this tormenting deception.

Buy Links for The Accidental Wife: 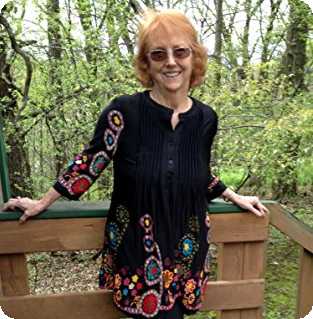 Born and raised in Packerland, Cj moved west to the medical mecca in Rochester, MN where her writing career bloomed with published award-winning stories and articles to her novel series inspired by Diana Gabaldon’s Outlander. Rescued horses, dogs, cats, children and one patient husband have motivated the heart of Cj’s craft. Though living on a country hilltop haven for decades, she has ventured down on occasion to climb a Jamaican waterfall, float in the Dead Sea, kiss the Blarney Stone and research settings for her next novel.