Today's guest is Jennifer Wilck, who's interviewing Dan Rothberg, her hero from ADDICTED TO LOVE, her latest release from The Wild Rose Press. Let's find out what makes Dan such an interesting character. Take it away Jennifer! 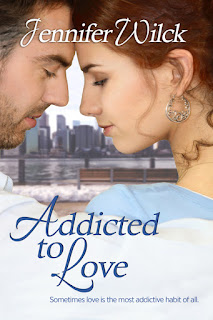 So, Dan, tell us about yourself:
Well, I’m a single dad with a teenaged daughter. We live in Hoboken, NJ and I work as a forensic accountant.

Wow, teens are tough:
[laughs] They are, that’s true. But eye rolls aside, we have a pretty good relationship. It’s been just the two of us for about eight years now, ever since my wife died.

Do you date?:
I haven’t in the past. I didn’t think I had time between work and taking care of Tess. But recently...[he shifts and rubs his hand across his neck]

You met someone?:
I did. Her name is Hannah and she lives nearby with her grandmother. We met at a concert—actually, she met Tess first. And despite my concerns about being able to take care of Tess and work and date, it seems to be working out so far.

Well, Tess is a teenager, so it’s not like she needs the same oversight as a young child:
[He bristles] No, but she still needs me. And the last time I put something ahead of her, well, it went really badly. I won’t do anything to risk her well-being.

That’s what makes you a great dad:
[His shoulders loosen] I try. And she and Hannah get along great, which makes things easier.

There’s a difference?:
Well, we ran into each other, literally, at a hot dog stand. After holding up the line and doing an impromptu awkward dance, we sat and ate together. I liked her. She made me laugh. But I didn’t get her phone number. So when I decided I should ask her out, I had to Google her. Luckily, I knew enough about where she worked to find her and she agreed to go out with me. So our official date was lunch at a great restaurant where we talked and got to know each other. And even though I’m woefully out of practice with women, she didn’t seem to mind my awkwardness and we’ve been seeing each other ever since.

What do you like about her:
[His blue eyes sparkle] You mean, other than everything? She’s smart—she works in PR and is gunning for a promotion, which I’m sure she’ll get. She’s beautiful—auburn hair, blue eyes. And she’s funny. She makes me laugh and she’s teaching me not to take things so seriously. She’s in her late twenties, so she’s about ten years younger than I am, but it’s been so long since I’ve had an adult to share things with. I love talking to her and getting her perspective on things, and I love how she values my opinions and confides in me. Did I mention how great she is with Tess? Taking on a teenager isn’t for everyone, but she seems to just get her and includes her seamlessly whenever possible.

Wow, she sounds amazing:
She is. [He frowns.]

But...:
I haven’t been able to be completely honest with her.

Why not?:
Because I’m afraid if I tell her about my past, she’ll leave.

What happened in your past, if you don’t mind my asking?:
[He draws a deep breath, holds it, and lets it out slowly] The car accident that killed my wife injured me. [Points to his cane] I was addicted to painkillers for a time, until I saw how I was putting Tess at risk. I broke my habit, but I’m afraid to tell her about it.

You don’t think she’d understand?:
Her brother is a drug addict.

Oh, that’s rough:
I have to tell her. I know we can’t have a relationship until I’m completely honest with her, but...

So how do you envision your future:
I’d like to say it’s with her. I just don’t know if she’ll have me once she knows the truth.

Well, good luck, Dan. I hope things work out with the two of you. You sound perfect for each other:
Thanks.


Blurb for ADDICTED TO LOVE:

Dan Rothberg struggled after an accident killed his wife and he nearly lost custody of his daughter. He can no longer allow himself to get attached to anything or anyone. Until he meets Hannah.
Hannah Cohen is a young executive with a meddlesome grandmother and a troubled brother. She’d like nothing better than to find her own Mr. Right, after too many Mr. Wrongs. A sexy older man with a teenage daughter was never in her plans.

As they navigate their relationship through adolescent attitudes and grandmotherly interference, they realize age is just a number and love can be right in front of them. But when the terrible truth of Dan’s former struggles is exposed, Hannah must decide if she can get past his deception and allow love to conquer all.

“What are we looking at?” She whispered out of the side of her mouth, pursing her lips together and giving him an insane urge to kiss them.

“I assumed since we’re standing here you must be looking at something, and I wanted to join in the fun. Or did you not realize we weren’t moving?”

Her nostrils flared and she bit her lip, and Dan realized she was trying not to laugh. Now he really wanted to kiss her, to capture her mouth with his, to make her his own. Before he could act on it, his stomach growled.

“Was that yours or mine?” She looked over at him, eyebrow raised.

His lips twitched. His breath hitched. He couldn’t keep his amusement to himself any longer. It bubbled in his chest and he let it out as he shook his head.

“Okay, while I am older than you, I’m not old enough to be senile. Yet. So yes, I did know we weren’t moving. But thanks for that. And yes, my stomach growled, because I’m hungry. Except I think I need to put eating on hold for a moment, because what I need, more than anything else right now, what I’ve needed all night long in fact, is to kiss you.” 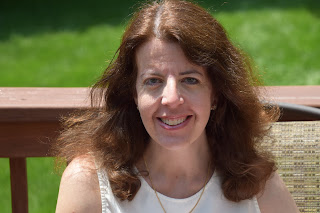 Jennifer started telling herself stories as a little girl when she couldn’t fall asleep at night. Her favorite stories to write are those with smart, sassy, independent heroines; handsome, strong and slightly vulnerable heroes; and her stories always end with happily ever after.

In the real world, she’s the mother of two amazing daughters and wife of one of the smartest men she knows. When she’s not writing, she loves to laugh with family and friends, is a pro at finding whatever her kids lost in plain sight, and spends way too much time closing doors that should never have been left open. She believes humor is the only way to get through the day and doesn’t share her chocolate.

She writes contemporary romance, some of which are mainstream and some of which involve Jewish characters. All are available through Amazon and Barnes & Noble.