Dee Gatrell visits today with a fun interview that offers a peek into her life and her writing process. Her newest release, SWEET SUNSET, is a later-in-life romance between a psychologist and a woman with too much going on in her life. Please welcome Dee Gatrell! 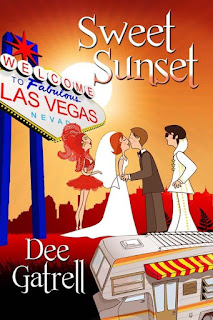 I like to read many genres, but I noticed over the years that I do not do well with he said/she said books. I always have more people in my stories. Probably because I have always been surrounded by aunt, uncles, cousins, and now my four children and 12 grandchildren.

Yes. As a child I wrote a lot of things, like fan letters to my favorite cowboys, letters to pen pals, family and friends. I loved getting mail. No email back then. In high school I wrote skits for the pep rallies. And in my senior year my English teacher loved the story I wrote with my weird sense of humor.

Many, but I have to say one of my favorite scenes was when the three women took the mothers and Myrtle Sue’s Mother-in-law to lunch, it was fun to write. June was the mother of friends who we went to lunch with once. She was a Southern lady who said to me: My neighbor Wanda had me come to her jewelry party, all that cheap stuff. Why you know, those Yankees don’t stay up North. And I knew I wanted to use June in a book, even as a minor character. She passed away at 93 a few years ago. Also used something from my friend’s mother.  One of my daughter’s was in an abusive marriage. I had to change a lot of things, but did get to kill him off.

What do you want readers to come away with after they read SWEET SUNSET?

I want them to read about characters they like, I want them to be able to laugh, and I hope they enjoy the recipes I put into the book.

Yes, never give up. Join writing groups, send your writing to friends who will love it even if it isn’t the best at the time. I wrote for newspapers and magazines for years, but was never able to sell a novel until I retired from working. But hey, I’m older than dirt, but finally did it!

I have lived a long time, come from a large family with all sorts of personalities, lived in several states, Ohio, Indiana, Oklahoma and Florida. I learned something new each place I have lived. If you watch and listen to people, you can pick up ideas for your characters. Is she clumsy? (I am). Does he have flirty eyes? Is she shy? Does she have hobbies? Does she belly dance? Do they like to garden? Does she have a crazy aunt she adores? Stop and look around.  You can pick up many ideas.

Yes, at the present time we have three dogs. Zeus is almost 13 years old, Icarus is 12 and Ellie, our rescue dog is 5 years old. Dogs give you unconditional love. It’s hard when they get old. You know they won’t be with you forever. They get sick just like we do and we need to be there for them. We had a cat once. He was adorable. One night when my husband was working (military) the cat kept jumping on me. Something it never did before. Seems he was warning me that the gas stove was putting out fumes. Thankfully, hubby came home from work and threw his cigarette down before walking into the house. We had two kids that had a bedroom near the kitchen. Hubby smelled it and went in and fixed the odor. Then a week later, a neighbor’s dog caught our cat and killed it.

I’m retired from the college where I worked for many years as an educational advisor. Yes, I did get ideas listening to students. I also wrote for the confession magazines and various newspapers while working there.

What do you like best about your hero from SWEET SUNSET?

Zack is compassionate. In spite of Myrtle Sue’s crazy family, he loves all of them. He’s a psychologist, and as Myrtle Sue says, he could practice on all of them. (I could use him with my family too!)

What do you like best about your heroine from SWEET SUNSET?

Myrtle Sue has a lot to put up with, a dead husband who talks to her in her sleep, an unmarried pregnant daughter, another daughter who is in an abusive marriage, a son who doesn’t want to grow up and a mother-in-law with dementia who moved in with her. But in spite of it all, she loves them and helps however she can. She also learns to quit being an enabler.

I love the name Myrtle Sue. How do you choose the names and physical characteristics of your characters? Do you base them on real people?

Long ago, in the early stages of AOL, a bunch of published and unpublished writers started a crazy fictional place to live we called Happy Acres. My name there was Myrtle Sue. My friend, Martha Hicks, (AKA Gladys Luween), was my next-door neighbor. We are still friends and call one another by those names. As for the others in Sweet Sunset, my editor made me change a lot of names. She said I had too many that started with M and other letters. I was running out of names to call Zack, and finally said Zack, no other names with Z. Then I realized the dog’s name was Zeus. I figured folks would figure out the difference between the two. I say I didn’t use anyone I know, but my husband says I know who that really is. So perhaps I did have a few people I know, strictly accidental, right?

We all need to laugh at times. I hope I always give readers a chuckle.

You made me chuckle with this interview, Dee! Thanks for being here.

Myrtle Sue Henderson, widowed, didn’t count on her mother-in-law moving in with her when her husband passed over. But Myrtle Sue’s loopy in-law troubles aren’t her only family baggage—she’s ailed with three adult children who use her like she’s a pair of Depends. With a daughter and two grandchildren attempting to escape an abusive husband, a second unmarried daughter who is pregnant with twins, and a son who refuses to grow up, she’s at her wits end.


Myrtle Sue didn’t figure she’d ever meet another man she’d care for, until she went to church to get away from her troubles, only to find more when her mother-in-law causes chaos and hits an elderly man with her cane and helps herself to money out of the collection plate. That’s how she meets Zack. She figures once he meets her dysfunctional family, he’ll run as fast as he can—away from them.

Sonja’s eyes widened, and she grinned.

I thanked God Adam was blind to Hazel’s faults. “Thank you, Adam. You have no idea how happy I am that you’ll be here for Hazel.” And I really meant what I said.

Hazel walked into the kitchen and glanced around. “Who’s here? Oh my goodness! It’s my son Harold. How are you, honey?” She bent over and kissed Adam’s cheek. “And why don’t you ever visit your mommy, you naughty boy?”

I rolled my eyes and waved toward Adam. “Hazel, Harold’s been dead for twenty years. This is Adam, Sonja’s friend from the hospital. Remember? He’s a nurse, and he stays with you while I work.” I should’ve added whatever we paid him was worth every penny. He really was good to her.

“I’m fine.” She took a seat and grabbed a muffin. “Who are you? Are you Violet’s daughter?”

“Of course.” She laughed and pointed at her head. “You know how it is when you get old. Someday your mother will be just like me.”

“I hope you made roast beef for Father,” Hazel said.

“Yes, of course, and I made garlic rolls,” I lied, and then whispered, “Sonja, want some garlic tied around your neck?”

Hazel pointed at the stove. “Good. And remember, he likes carrots and noodles around his roast beef.”

Adam stood and smiled. “Well, I’ve got to go now. I’ll see you on Monday, Nana.”

“Okay, honey.” She reached into her pocket. “Here’s a dollar. Get yourself something to eat. You’re rather skinny, you know.”

“Thanks,” he said, kissing her cheek.

I walked him to the door.

He handed me the money. “I’ve tried giving her the money back, but she gets mad. You take it.”

I brushed away his hand. “No, Adam. You keep the money. Whatever you get, you deserve. You’re very good with Hazel. Good luck with your new friend.”

I hugged him. “Muffins.” Terry wasn’t pretty like Adam. Instead, he had a rugged look, more like a cowboy. He had those fabulous blue eyes but not the long lashes. His nose showed signs of his youthful fist fights, and his dimples added to his charm. I can’t tell you how many girls called the house for him in his teen years. And yet at the age of twenty-three, he still hadn’t found a special woman.

He grabbed a chair and sat. “Muffins? Don’t you have any real food?” 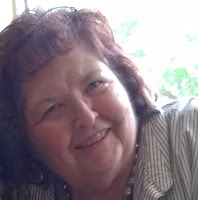 Dee Gatrell grew up in OH. She and her cousins entertained themselves by making up stories, dressing up in costumes and charging the neighborhood kids a few cents to come watch their plays. Her writing changed over the years. After marrying her husband Larry, they moved around the country, first when he was in the Air Force, next his civilian jobs required moving, too.

They have four children. Being away from family and listening to the kids running rampant, she would write letters to her relatives. She had a lot of aunts, uncles, cousins and various friends. This is her way to relieve stress. They found her amusing. She wasn’t trying to be funny, she was trying to stay sane.

The first time they relocated to Florida, her husband suggested she might want to go to college. Was he kidding? All she knew about was diapers, children, cleaning, laundry and cooking. She picked up the phone and called the local community college. The person on the phone encouraged her to take a writing class. From there she just kept attending until she finally, ten years later, received her BA from the University of Florida. She wrote for various newspapers over the years, and also worked as an educational advisor for Seminole State College before retiring.

Dee’s first novel, Sweet Sunset, was released in December 2016. She refers to the book as her dysfunctional family novel. She is now working on two more novels, one is an inspirational romance, the other another woman’s fiction.


Dee lives in Florida with her husband, Larry, four grown children, and a slew of grandkids. You can contact her on FaceBook or email her at gatrelldee@gmail.com.
Posted by Jana Richards at 12:30 AM