Linda Palmer and MOST WANTED

My guest today is fellow Uncial Press writer Linda Palmer. She's sharing the story of the inspiration for her Psy Squad series. I love stories about psychics so this sounds right up my alley! Please welcome Linda Palmer. 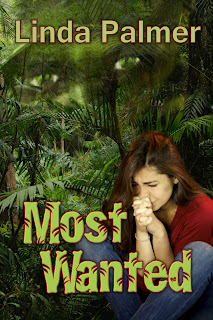 It all started with a movie called Vampire Academy, based on the first novel in Richelle Mead's delicious six-book series. I read them all and was sucked right into that supernatural world--no pun intended. Around this time, I also watched Divergent, a movie based on the first novel in Veronica Roth's dystopian trilogy. I loved that world, too. While the series were very different from each other, they had one thing in common: the hero and heroine fall into inconvenient, unwanted, and inappropriate love. No wonder I got so caught up. I mean, what's more tantalizing than forbidden attraction?

The result of all that was my novella Most Wanted, set slightly in the future when psychics have gone underground to escape public persecution. Kate Lawless, a waitress temporarily suspended from her job, is nineteen and fatally poor when she sees a World Security League all-call for anyone who has ever had "women's intuitions" or "gut feelings" that turned out to be right.

Is this a trick to lure mentalists out of hiding? Or does this reputable organization really need help? It honestly doesn't matter to Kate once she reads the small print that promises monetary reimbursement for simply showing up. She's weeks behind on her rent, and her car is stuck in the shop until she can scrape up enough money to pay for repairs. If the WSL is promising cash, she's going to be there. Never mind that she's not one bit psychic. All she has to do answer a few questions, get paid, and get the heck out of there.

It turns out that Kate shows promise. Even more shocking, the WSL wants her to undergo further testing. Meanwhile, she'll be paid a per diem, put up in a very fancy St. Louis hotel, and mentored by Nikolai Zycov, a several-years-older guy whose East European accent, alone, takes her to her knees. Never mind his formidable size and good looks.

Of course she agrees. Nikolai drives her to her apartment to pack a bag, dropping her off at the entrance.


The moment I unlocked my door, I shrugged off my jacket and began frantically straightening up. Dirty dishes in the dishwasher. Dirty clothes in the hamper. I made up the Murphy bed before folding it into the wall, kicked spare shoes into the closet, and tried to think what else deserved my attention. Realizing I was down to clutter that had no place to go, I grabbed an overnight bag and began cramming everything I might need into it.

While getting my toothbrush, I caught a glimpse of my reflection in the bathroom mirror and groaned. No wonder Nikolai had helped me cross the street. The winter wind had done a job on my long hair and somehow erased my make-up, making my oval face appear younger than usual. I pulled the snarled strands into a messy ponytail, all the while wishing I had time to hide my freckles with some foundation. But I didn't. In fact, a knock on the door made me jump even though I'd been expecting it. A quick peek confirmed it was Nikolai in the hallway. I unlocked the door. "That was fast."

Nikolai stepped inside, his cool gaze sweeping me and then the entire room that was my apartment. I wondered what he thought of the place. Trying to see it through his eyes, I guessed it must look pretty shabby, from my second-hand couch to my boxy, outdated TV. There were movie posters on the walls—Thor, Captain America, Hawkeye, Spiderman. I did love my superheroes. And while the idea of being rescued by a man would only appeal to me if I was flat out of options, these guys were eye candy that brightened my walls.

"Actually, I will have one this year. I'm just a little late putting it up."

Nikolai's gaze lingered on the book cases on each side of the bed frame, in particular a Harry Potter snow globe. "Just the one bag?"

We left the apartment. Once my door was locked, I turned to Nikolai. "I have to make one more stop before we go."

We rode the elevator down to ground level. "Stay here. I'll be right back." I pushed open a door with Office on it. "Hello, Mr. Bruno."

"Katydid. Come to pay me this month's rent? You're now three weeks late."

"I know. I know. And that's actually why I'm here. I've got some money coming in a few days, so if you can just hold off a little longer—"

His heavy sigh said it all. Blowing him a kiss for his patience, I turned and smacked into Nikolai, who'd apparently followed me inside. My face flushed. Unable to look him in the eye, I slipped past and hurried outside.

Back in the Jeep, I stewed a little, imagining what he must think of me. "I usually carry more cash. I mean, my job more than pays the bills, plus I always get good tips. But I got suspended without pay from my waitressing gig a couple of weeks ago."

Nikolai gave me an incredulous look. "Why?"

"I poured a glass of iced tea over some jackleg's head."

He considered that for maybe two seconds before inserting his key in the ignition.
Was he judging me? "He deserved it, okay? Tried to feel me up. How was I supposed to know he was my boss's third cousin?"

Nikolai pulled out of the lot and drove for a good ten minutes before he spoke again. "You're what? Seventeen?"

That clearly surprised him. "Well, your parents should still help so you don't have to work in a place like that."

"I don't have any, and the grill is usually okay."

"What about siblings?" That word had never sounded so sexy.

I'd surprised him even more. "You're alone in this world?"

That sounded so dramatic that I laughed. "Me and a zillion other people. And I'm not that alone. I do have friends." I hoped he wouldn't ask how many.

"Nosy much?" I tried to change the subject. "What about you? Parents? Siblings?

"Well, don't wait too long. Love might pass you by."

"Love isn't for everyone."

I snorted a laugh even though I actually agreed with him. "Several of the friends I mentioned, male and female, are single. I could set you up."

"I'm not gay, and your female friends would be too young for me, just as you are."

Double ouch. "So you've given this some thought?" I could hope.

He didn't answer. We made the rest of the trip in silence. At the hotel, he simply made a left, crossing traffic to drive under the overhang. Realizing he was scattering protestors by dropping me off at the door again, I climbed out of the Jeep and got my bag from the back seat. "Will I see you around?"

"May I have your cell number?"

"Actually, you already have it. My number is on my registration form. Call me if you change your mind about my friends. Any one of them would love to go out with a babe magnet like you."

I pivoted on my toe and went straight into the hotel.


Uncial Press released Most Wanted in November 2016. By then, my editor had suggested that I give one of the secondary characters, Miles, a book of his own. The result was Psychic High, which became book two in a series I'm calling Psy Squad. The third installment is Here and There, also already written. Both novellas will be released this year. These novellas have been a lot of fun to research and write.

Why? you ask. Because I'm a believer, of course.

Kate Lawless, nineteen, is all alone in the world and struggling at the moment to make ends meet. Although answering a World Security League all-call for psychics is dangerous in these phobic times, she is tempted by the promise of reimbursement for just showing up. Screenings take place in a hotel conference room. When hers goes very well—a shocker—she is checked in so that she can undergo further testing. Staying at the ritzy hotel is quite a treat for Kate. The Christmas decorations are beyond beautiful. The festive background music reminds her of past holidays, most of them celebrated with a foster family or with other kids living in the youth ranch or orphanages that have been her life since the age of two. Her holiday plans this year? Enjoy this surprise vacay to the max, take the money, and pay her past-due rent.

Nikolai Zycov, a Russian member of the WSL team, is assigned to her. While he claims that he's only interested on a professional level, he won't stop meddling in her personal life. He comes off as deliberately distant one minute; helpful, the next. Although annoying, this actually intrigues Kate, as does the fact that her clairvoyance gets a psychic boost whenever Nikolai is physically close.
Distracted by her growing feelings for him, she finds it harder and harder to lock onto Mbali Tinibu, the ruthless Sierra Leone civil war criminal she is helping the WSL locate. Kate finally asks to work alone and is given permission in spite of Nikolai's objections. Only then does she realize how unpredictable and dangerous her psychic gifts can be. And having an annoying Russian around? Well, sometimes that's not a bad idea.