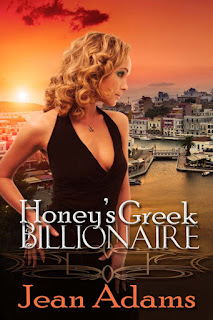 Where did you get the idea for your new novel, HONEY'S GREEK BILLIONAIRE?

I was sitting at work one day, day dreaming about plots (as you do) and had one of those what-would=happen=if moments, and lo and behold a book was born.

What do you want readers to come away with after they read this book?

I’d like then to smile, read the last couple of pages again and think aaahhhhh, I really enjoyed that.

One day I’d really love to have a crack at mystery, a la Agatha Christie, but I have a few more books to wrote before that happens.

Usually. Then if I go flat one I can turn to another. Currently I’m  working on five right now, a contemporary, a trilogy and an archaeological paranormal.

Never, never, never give up and don’t listen to nay-sayers or dream stealers.

Usually the plot, but occasionally the characters. It depends on what grabs my attention first.

I’m a plotter. I used to be a pantser but got fed up with having to go over the story every time I had a new idea that didn’t work anyway. Plotting keeps my thoughts disciplined.

I was born in England but now live in New Zealand. I have been writing for several years (can’t remember exactly how many.)

Archeology would be my second passion but I’ve never taken part in a dig. Would love to though, either in Egypt or Greece.

I have called on some of my travel experiences.

Probably my TV, but then again I use it for a lot of historical research material.

I wanted to be an air hostess but alas, it was not to be.

What do you like best about your hero, Paris Magdalinos, in HONEY'S GREEK BILLIONAIRE?

He’s a delicious sexy Greek who lives on an Aegean island.

What do you like best about Honey, your heroine?

She’s very much her own woman who gets sideswiped by Paris and realizes that love is the greatest gift if all.

I had trouble with his name until I came across the name by chance in an article.

You could start with No Other Love set in Los Angeles and Greece. It’s a story I’m particularly fond of.

Tell us a little about your current release.

Honey works for a Greek company in London. Her Greek boss takes a fancy to her and flirts with her making her feel uncomfortable. A friend tell her that the way to stop him in his tracks is to ask him to marry her. To her surprise, instead of laughing it off, he accepts. I thought it was a fun idea to play with.

In an effort to stop his embarrassing flirtations, Honey Preston jokingly asks her billionaire boss, Paris Magdalinos, to marry her. Much to her surprise, he accepts, and no amount of wriggling on her part will induce him to let her off the hook. Besides, she doesn't believe she's good enough for him.

Paris has his own agenda. He's using Honey's innocent proposal to help him out of a sticky situation. And their marriage will only be for a short time...until he kisses her and discovers she's the woman he's been seeking. She's perfect for him, and he wants to stay married. But Honey's beliefs are hard to shake.

“And this is Honey Preston, Mr. Magdalinos.”

Snapped out of her daydream, Honey focused her attention on Brian Armstrong, the overall office manager. Oh lord, I’m about to be introduced. Should I offer my hand for a handshake? Please don’t let me do anything stupid like curtsy.

“It was Miss Preston who alerted me to the problem. She was Mortimer’s assistant for a year and a half.”

“Honey?” A light dancing in the chocolate-colored gaze collided with hers. Her face burst into instant flame. Oh, my goodness. Paris Magdalinos gave a short nod and bestowed on her his sexiest smile before his amused, sparkling eyes moved on to the next person.

Hot in here all of a sudden. The need to fan her face became an urgent priority after the heated brown eyes moved away. But she didn’t dare move so much as a finger in case any movement, however slight, attracted his attention again. She wasn’t sure she could handle another helping of his dark-eyed scrutiny. It was as though his eyes had undressed her.

But anonymity was not to be.


Jean Adams is a firm believer in happily-ever-after and enjoys writing books with happy endings.
She has published nine romance novels and is currently working on several other books, including a trilogy set in ancient Egypt.

She likes dark, mysterious heroes and strong heroines, who are their perfect match. They are soul mates, and their love for each other goes soul deep.

Jean is the founder of Romance Writers of New Zealand.
Posted by Jana Richards at 12:30 AM