I'm very happy to have my friend and editor Judith B. Glad as my guest once more. Her Regency romance, FLORENTINE ENCHANTMENT, releases today. She's here to talk about how she "recycled" this story. Please give Jude a warm welcome! 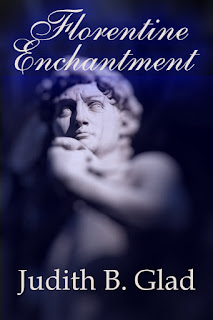 Recycled stories aren't the same as recycled books. They are stories that, for one reason or another, have fallen out of print (e- or p-) and are left to languish unread.

We writers hate to see our books go unread. It's not just the royalties (although I admit they are nice), but the fact that we had something to say, a story to tell. We wanted to share it with someone. Lots of someones, preferably. And when the story is no longer out there to be read, it's kind of like seeing an old friend disappear.

So we do what we can to clean them up, polish away the dull spots, give them new clothes, so to speak. Or not.

Perhaps all they need is some misspellings corrected. A slight change in wording here and there. More explanation--or less, since many of us learn how to say something better and in fewer words as we mature as writers. And once in a while, we realize that a story we told a few years back wasn't really the whole story. That's true of several books by a favorite author of mine. She wrote some really good stories to fit the page count set by her publisher. They did well, but then the publisher discontinued the line and so they were no longer available. When offered the opportunity to bring them back into print, she chose instead to expand them, enrich them. And because she's a talented storyteller, the longer books are not merely longer, but ever so much better.

Of course, there are other kinds of recycled stories too. Ever see the musical "Kiss Me Kate?" It's really Shakespeare's Taming of the Shrew. The film classic Ran is King Lear moved to Medieval Japan. The Cinderella story isn't just a Brothers Grimm folk tale, but a recurrent theme in many folk tales around the world, both before and since the Brothers added it to their collection. Clearly the notion that a poor-but-good person can sometimes triumph over adversity speaks to people of many cultures.

All of the examples above qualify as recycled stories, both the ones that were merely tweaked or greatly expanded and the ones that are retold in a different guise.

There's one hazard when an author sets out to recycle a story, though, especially if there is a change of titles or cover. Readers don't like to buy a book and then discover it's one they already had. I've done it myself, and wasn't happy about it. The first time or two it happened, I was mad at the author, but after a while I realized I should have read the book description better, or perhaps looked at the information on the back of the title page (where you should find a publishing history). Good advice, and one I try to follow. But not too long ago, I ordered an ebook and when I started reading it, I realized I already had it in paper, with a different cover, a different title. I honestly can't say what the difference is, but as I read the newer version I realized that it was somehow better, more satisfying.

In other words, it was a story worth recycling.

I've got a novella releasing today that's a recycled story. Eventually the rights were returned to me and it sat in a folder on my computer for a couple of years. Then one day, while I was doing a little disk-cleaning, I ran across it. Read it. Decided that with some editing and some rewriting, it could be a better story, especially since I had actually been to the places described, instead of relying on photographs and written descriptions, as I had when I initially wrote it. I hope my readers will agree.

Orphaned in Florence, Lucy Raymond takes the only employment she can find, that of a castrato assistant to an art and antiquities dealer. But as she grows into womanhood, her masquerade chafes, for it allows none of the romance she craves.

In her loneliness she often visits the Piazza della Signoria, where she gazes at the magnificent sculptures and dreams impossible dreams. Until one day, when she is overcome by loneliness and the oppressive heat, she faints at the feet of an enormous sculpture, only to wake in the arms of its living embodiment.

Allowing herself to be seduced is the last thing Lucy should do. But Vido is warm and vital and the living image of David, so how can she resist?

I let my gaze drift past the loggia, seeing but paying little attention to the Cellini bronze, the Donatello marble, the other works of supreme artists. The massive sculpture of Hercules was only part of the scenery, unimportant to me. It was David my eyes sought, David I drank in the sight of.

He stood across the piazza on his black marble pedestal, foursquare and firm. I walked toward him, ignoring the crowd, the babble of a dozen languages around me. As I drew near, I raised my chin, letting my gaze linger over his feet, strong white feet, able to walk all day and into the night. His ankles were slim, yet sturdy, his calves well shaped. I saw the veins in his calf, the sinews connecting lower leg to knee. His legs were long, lean, sturdy.

Have I told you of his magnificent body, of the strength of his arms, his legs? Of the beauty of his naked chest, his uncovered shoulders? Do you know what a real man looks like, how the muscles lie close to the body, so that every movement becomes a symphony in efficiency? His right leg holds him upright, while the left relaxes. His left arm is lifted, holding a sling, with which he will defend himself--or me--from harm through the long, dark night.

My mouth dried at the thought, butterflies fluttered in my middle. I imagined his hands on my shoulders, his fingers touching my cheeks, my eyelids, my lips. I felt his mouth upon mine, not cold like stone, but hot. Wet. His tongue invaded me, swooped between my teeth, tangled with mine.

My knees grew weak. I trembled. The smoldering warmth flared into flame, consuming me. Perhaps I cried out.

"Signorina, you are ill." A strong arm encircled my waist, a hard body supported me.

I smelled sweat and tobacco, a faint aroma of wine, as I was lowered to the pavement and propped against the pedestal supporting my love.

The eyes staring into mine were brown, soft like a doe's, ringed with thick, long lashes of sooty black. The face was familiar--like so many I saw daily in the streets, a poor replica of my David's. The hand cupping my cheek was hard with callus, but gentle, tender in its touch.

"No, I am not ill," I said, but my voice betrayed me. It quavered with the aftermath of my helpless passion.

His smile was quick, fleeting. "Of course you are not ill. Merely overcome with beauty. I saw you, saw how you could not take your eyes from...him...from David." He glanced upwards, a quick lift of his head. "He is indeed one to make a woman tremble, no?"

"I love him," I said, then bit my tongue. "I mean, I love the artistry, the beauty of the sculpture. It is incomparable."

"Sì. But he would be much prettier were he flesh and blood. Here, let me help you stand. I will give you wine and bread and you will feel much better." 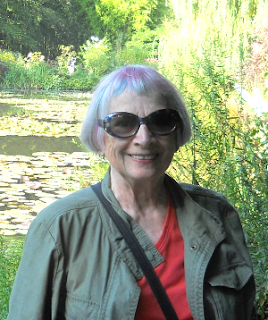