Kryssie Fortune in the Spotlight!

Kryssie Fortune is my spotlight guest today, with a blurb and an excerpt from DOMINATED BY THE DRAGON, Book one in her Doms of Dragon Island series. Welcome Kryssie! 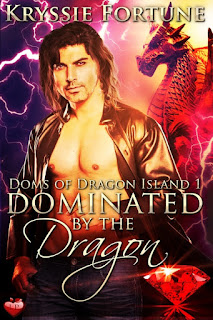 A former super soldier turned dragon demon must choose between his soul mate and saving the world from a nuclear winter.

The British army’s nuclear testing bonded a dragon into Flynn Hemsworth’s soul. Military scientists vivisected and tortured him until he escaped two years later. Although he’s never aged, he’s been alone and on the run for almost six decades. When he prevents a naked woman from being the prize lot in a coven’s slave auction, he realizes she has an unexplored submissive streak.

Hope Mathews—a sassy blonde with killer keyboard skills—is a strong independent woman. When Flynn prevents her being sold to a demon, she discovers she enjoys spankings and light bondage.

Together Hope and Flynn must shut down a coven of black magicians, rescue kidnapped demons, and stop a black ops nuclear missile hitting the UK. Even if they manage all that, Hope’s the granddaughter of a billionaire while Flynn’s still on the run from the military who want to dissect him again. Can they find common ground and build a life together?

Excerpt
He needed to grab the women and get out of here. Once he’d stashed them in the safe house he’d warded earlier, he’d come back and teach the slavers about blood and pain. His dragon purred at the thought.

He despised slavers and black magic. Hell, he hated anything magical and weird—himself included. Thanks to the military and their sick experiments, he’d become danger, death, and destruction—at least temporarily. His inner beast roared again. “Free me. Let me play with them until they beg for mercy.”

He slicked his hand through his damp curls. His beast stretched inside him and unfurled its claws. Its fire scorched through him, feeding his anger and warming his body. The rain fell harder, making the ground muddy under foot. High on sex and violence, the crowd didn’t care.

When Flynn saw Hope shiver, fury whipped through him. He’d tie a knot in the snake demon’s tail; then those hyena demons were going down. Still human, apart from the ever-present purple glow in his eyes, he charged. The spectators gasped. Pebbles dislodged by his wild attack rolled down the hillside. The hyena demons howled and leaped forward. One lunged for his ankles. The other went for his throat.

The snake demon stood aloof and made a soft, sibilant hiss. Flynn’s fist smashed into the hyena’s face. Its distressed yelp roused the crowd.

“Take him,” one spectator shouted.

“Twenty quid on the hyena shifters,” another yelled.

From the rear of the circle, another called, “Ten on the human.”

“Come on, big guy”—a would-be witch fingered her clit—“take him.”

A woman at the front of the crowd cooed, “Yeah, kill them then come play. We’re willing and sooo good.”

One hyena clung limpet-like to Flynn’s legs. Almost, he toppled into the mud. Instead, he staggered but stayed stubbornly upright. His beast roared inside him. It wanted to wrap those hyena demons in a sheet of flame and send them straight to Hell.

Flynn heaved one leg free. His steel toecap pulverized the hyena’s jaw. The other hyena leaped for his throat—again. Didn’t work the first time, pal. What’s up? You got learning difficulties?

Flynn’s fist crunched into its face like a battering ram. It howled and retreated, blood pouring from its nose. It leaped again. Flynn spun aside, as graceful as a ballet dancer. The hyena’s claws barely missed his eyes.

A grab of a hyena wrist. A twist that stretched tendons and misaligned joints. Shards of bone poked through its flesh. Its earsplitting yowl made the spectators gasp. The hyena demon staggered toward the woman tethered on the stone slab.

Flynn’s beast roared and demanded its freedom. He ignored it, flexed his muscles like a well-toned athlete, and made a standing leap onto the altar. He landed with one foot either side of Sleeping Beauty. The hyena demon with the pulverized cheek wrapped its arms around one of his legs and yanked hard. Bloody thing’s hanging on to my leg like it wants to hump it. Well, hump someone else, pal.

Flynn clotheslined the hyena midflight. Its larynx crushed beneath his forearm as its jaws snapped shut on empty air. The hyena demon dropped as though he’d shot it. It lay in the mud, chest heaving. Flynn leaped from the boulder, grabbed the demon’s neck, and twisted until he felt vertebrae shatter. Its eyes glazed, and it whined a brief lament before its head flopped to one side. Its tongue lolled between its lips, limp and lifeless.

One hyena down, one to go. Then for the snake. 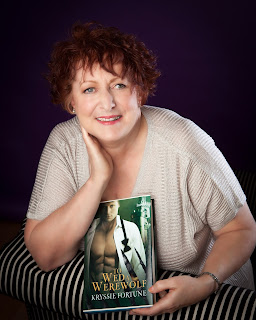 If you love sexy vampires, possessive werewolves, muscular Fae, and ancient Gods, then Kryssie Fortune's your girl. She grew up climbing trees and playing with imaginary dragons. Now her dragons live in her books. Kryssie's a Yorkshire lass, who lives within driving distance of Whitby - the home all things paranormal and strange. A chunk of Curse of the Fae King is set there. It's also where Bram Stoker penned Dracula.

Her husband says she's part cat - always curious. He's probably right, but she'd rather be part dragon. A serial dieter and coffee addict, Kryssie reads read anything she can get her hands on. Her pet hates are unhappy endings, and a series where the books end on a cliff hanger.

Kryssie is active on social media and loves to here from her fans.