#NewRelease: A SUMMER'S ENCHANTMENT by Kathleen A. Gallagher

Kathleen Ann Gallagher returns with another new release! This time it's A SUMMER'S ENCHANTMENT, a paranormal romance in her Moonlight and Jasmine series. Kathleen is playing Quick Five and sharing five of her favorite things. Thanks for visiting Kathleen! 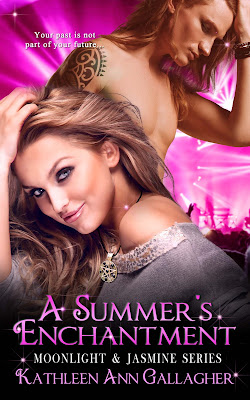 1 . Favorite movie:  I have two favorite movies. The first one is Splendor in the Grass. It stars a young Natalie Wood and it was Warren Beatty’s debut movie. My friends and I used to watch it every time it came on television. The ending made us cry every time. The next one is Out of Africa with Meryl Streep and Robert Redford. The sound track is amazing. The costumes are beautiful. The story is fantastic. Yes, I cried at the ending.

2. Favorite TV show:  Days of Our Lives. How many of you watch or have watched soap operas?

3. Broadway show: I have two favorites. Phantom of the Opera. The other one is Rent. I’ve seen both multiple times.

4. Favorite song: Always by Bon Jovi. I even use it as my ring tone. My heroine and hero dance to it in A Summer’s Enchantment.

5. Favorite book: I have so many. I’ll tell you one of them. Beach House by Jane Green.

A strange request brings Cassandra and Jake together, but opposite worlds may tear them apart.

Cassandra Wales, an independent and determined registered nurse,
finds her plans for the future shattered when her boyfriend dumps
her. Her witchcraft made him squirm, but she wasn’t about to
change for him. Decorating her new home keeps her mind off her
failed relationship. She never expected to find an elderly woman,
accompanied by her hot and sexy grandson, at her doorstep with an
odd request.

Jake Connor is an ambitious, up-and-coming lead singer in a rock
band. When his grandmother has a dream about her late husband
and she asks him to drive her over to their first home, he doesn’t
question it. Once there he meets the woman of his dreams. But how
can he expect her to take a back seat while he pursues his big break
in the exciting world of rock and roll?

Cassandra can’t resist Jake’s magnetism, yet she has her doubts about a man who has women begging for his attention. Can a rocker and a nurse who practices witchcraft have a future together, or will their different worlds put a halt to their budding romance?

The DJ played Always by Bon Jovi. Cassandra smiled. “I love this song. It’s one of my favorites.”

Jake took her by the hand, his gaze locked on hers. He led her to the dance floor, and they found a spot in the far corner, away from the crowd. With their bodies close, as if they’d danced together before, each step was effortless and seductive. She placed her head on his shoulder, with her hand across his chest, and slowly advanced down his arm, her body alive with desire. How could she respond so easily to a man she’d just met? His breathing sped up as she snuggled up against his cheek.

“You’re so sexy,” Jake whispered in her ear.

Her fingertips glided across his back, exploring each muscle, making her delirious with longing. Lost in his tender embrace, she felt warmth ignite between her legs. It seemed as if they were alone on a desert island, and she wanted nothing more than to stay all night. It was the most sensual dance she’d ever experienced. If a slow dance was this good, the sex would be unbelievable. A longing to feel his bare skin against hers was undeniable. She secretly imagined his lips trailing down her chest to her belly.

His warm breath on her neck tantalized her. Jake brushed his lips against her cheek and she responded with uninhibited whimpers. His woodsy scented cologne was hypnotic. He sang the song nuzzled up against her ear, making her light-headed. It didn’t scare her; it felt wonderful.

When the song ended, they remained wrapped in each other’s arms. Jake pulled back, but kept his arms around her waist, their foreheads touching. “You’re so beautiful. I’m happy I gave my grandmother a ride the other day. Thank God for her dream about my grandfather.”

Speaking of your grandfather, I think he’s come back to his old house for a visit.”

“What do you mean? Come on, let’s sit a minute.” He took her by the hand and guided her back to the table. They sat down, and he moved close to her. “Now, what were you saying?”

“Strange things have been going on in my house,” Cassandra confessed.

“What kind of things?” He looked at her curiously.

“I sense a spirit, and it gets cold when he visits. I’ve experienced this before, and I’m sure he’s hanging around for a reason.”

“I hope he’s not calling my grandmother to join him. She’s got so much life in her.” The sad look in his eyes made her heart ache.

“It doesn’t mean he’s here for her. There are a number of reasons spirits return to their homes. Maybe he wants to check up on her.”

“You have a good point.”

She’d try a spell to free his weary spirit, but now, all she wanted to do was pick up where she and Jake had left off. It seemed like the energy had shifted from a romantic one to one of concern. She should have kept her mouth shut until another time. She took a long, cleansing breath, hoping he’d be okay.

“I have to get back.” Jake pulled her into him and kissed her. “You’re overthinking.”

His smile was infectious.

“Maybe so.” She laughed. “Go on. I’m going to the restroom, but I’ll be right here when you’re done with the set.” 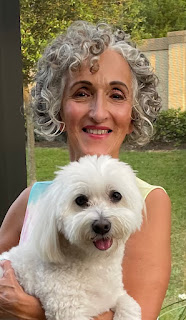 Kathleen is originally from New Jersey, but currently resides in

Southwest Florida with her husband and her Coton de Tulear, Luc.

She has been writing stories since she was a young girl. When

Kathleen is not dreaming up a plot for her next romance, she

enjoys performing in community theater. You might also find her

relaxing on one of Florida’s pristine and sparkling water beaches.

Kathleen loves meeting her readers, and she is extremely grateful for