Felony Melanie and the Prank War, based on characters from the movie Sweet Home Alabama is a laugh-out-loud #YAlit #RomanticComedy #comedy #romcom #romance

Kris Bock has a new release called Felony Melanie and the Prank War, book 3 in the Felony Melanie series of young adult comedies. Kris wrote this series with her brother Douglas J. Eboch, and based it on the movie Sweet Home Alabama which Douglas wrote. Best of luck with the new book, Kris and Douglas! 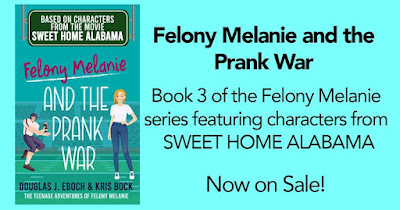 Felony Melanie and the Prank War

You met her in the movie Sweet Home Alabama. Now see what Melanie Smooter was like before she became hot fashion designer Melanie Carmichael.

In high school, Melanie Smooter is known as Felony Melanie, the teenage troublemaker of Pigeon Creek, Alabama. Aching to escape the boredom of small-town life, her restlessness sparks many reckless adventures. Her boyfriend, Jake, is always by her side – and the local sheriff is usually close behind.

This week, everyone in town is looking forward to the big football game against Greenville, Pigeon Creek’s hated rivals. Jake is more excited than most – as the new quarterback, he’s poised for stardom. But the lead up to the game becomes as exciting as the game itself when pranksters from Greenville steal Pigeon Creek’s pig mascot. Then Jake’s playbook goes missing, which could get him kicked off the team. Could the pranksters have stolen it as well? Melanie, Jake, and their friends embark on an undercover mission to recover the stolen mascot and find Jake’s playbook before the team is disgraced in front of the whole town.

Head back in time to the early 1990s for this laugh out loud rom com based on one of the best rom com movies of all time.

Melanie jumped so bad she almost smeared her lipstick. It sounded like someone was setting off fireworks out in front of the school. Melanie quickly finished applying her makeup. She hadn’t seen Jake since lunch period, and she wanted to look good for him. She tapped the spot on the mirror where she had carved “MS+JP” back in ninth grade, then scrambled out of the girls’ bathroom to see what all of the fuss was about.

Sure enough, fireworks were going off in front of the sign that normally read “Pigeon Creek High,” but now had a piece of poster board taped over it that read “Go Greenville!” Roman candles shot streaks of flame skyward, while a fountain sprayed colorful sparks and tendrils of white smoke into the air.

Greenville was Pigeon Creek’s biggest rival on account of two reasons: one, the town was just up the road, the closest school in their district. Two, they were a bunch of snooty rich kids. Pigeon Creek’s football team was playing them Friday night. A swell of pride filled Melanie’s chest at the thought of the game. Jake was the starting quarterback this season. He’d show those Greenville snobs that they’d better not look down on the country kids.

A dozen other students had been drawn out by the commotion. Jolene, captain of the cheerleaders, stomped up and down in her red and yellow cheerleader minidress loudly vowing revenge.

Lurlynn ran over from the practice field in her cheerleader outfit. “What’s going on?”

“Greenville prank,” Melanie said. “Kind of a lame one if you ask me.”

Lurlynn frowned. “It’ll get worse. You know how this week goes.” “Hey,” Jolene pointed at Lurlynn. “Aren’t you supposed to be watching Oinkers?”

Oinkers the pig was Pigeon Creek High’s live mascot. Pigeon Creek’s team was called the Wild Boars, which was way more intimidating than a farm pig, but wild boars were also a lot harder to manage, so the 4-H kids supplied a stand-in each year. Lurlynn had raised Oinkers to his current chubby 150 pounds. The cheerleaders and pep squad took turns guarding him during rivalry week. Melanie had been a cheerleader for about three weeks, but it just didn’t suit, with all the practicing and silly rules and the mean ol’ coach practically trying to dictate her whole life. When the coach kicked Melanie off the team, it was a huge relief.

“I was watching Oinkers,” Lurlynn said, “but then I heard…” Her face went pale. She bolted back toward the field. Melanie followed.

Oinkers wallowed in a little chicken-wire pen until it was time to run out on the field with the team or do his patented touchdown dance, the one Lurlynn had trained him to do. But now the pen was empty. The fireworks weren’t the prank, they were a distraction.

Lurlynn crouched down, hands over her cheeks. “Oh no.”

Melanie kicked at the gate post of the empty pen. Those Greenville High kids would pay for this.

Jolene strode up. “You had one job!”

“I was only gone for a second.”

Jolene sighed. “There’s a tree stump in my backyard with a higher IQ. If you had an idea, it would die of loneliness.”

Melanie felt bad for her friend, but Lurlynn had screwed up. Course that didn’t mean Jolene had to be such a jerk about it. Melanie patted Lurlynn’s shoulder.

Jake emerged from the gym wearing his football uniform for practice. Melanie ran over and gave him a kiss.

“What’s going on?” He wiped the lipstick from his mouth. “Why’s Jolene pitching such a fit?”

“Quiet!” Melanie heard something, off in the woods at the edge of the field.

“They’re still here. Come on!” She took off in the direction of the noise. 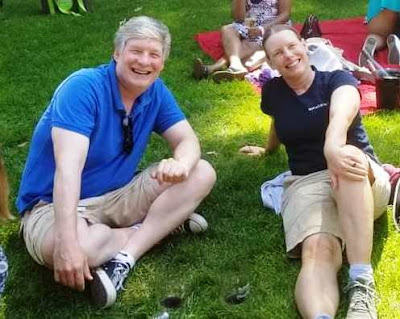 Douglas J. Eboch is a screenwriter and author who wrote the original screenplay to the movie Sweet Home Alabama starring Reese Witherspoon. In his novel Totally Rad Wormhole, two nerds from the eighties accidentally open a wormhole to today, go to their high school reunion, and meet their future selves. Horrified at what they’ve become, they set out to change their fate.

His sister is the author of over 100 books under the names Kris Bock, M.M. Eboch and Chris Eboch. As Kris Bock, she writes novels of mystery, suspense, and romance, many with outdoor adventures and Southwestern landscapes. In the Accidental Detective series, a witty journalist solves mysteries in Arizona and tackles the challenges of turning fifty. This humorous series starts with Something Shady at Sunshine Haven. The Furrever Friends Sweet Romance series features the workers and customers at a small-town cat café, and the adorable cats and kittens looking for their forever homes.