I'm excited to welcome Desiree Holt and Liz Crowe to my blog today. They've just teamed up to write NUMBERS GAME, a steamy sports romance from The Wild Rose Press. Hatch and Olivia from NUMBERS GAME tell us five things we need to know about each other. I love their comments! Welcome Desiree and Liz! 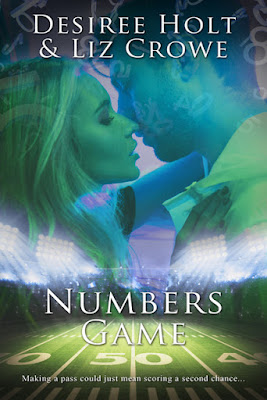 Five Things you Should Know about Olivia

1. She can quote football, baseball, and basketball stats for pretty much any player you name, past or present. I know. I’ve tested her on this.

2. Her power to pull me out of a pissed off mood if my team loses approaches “super.” And she can almost always help me figure out what went wrong on the field. I would hire her as an assistant coach but that’s nepotism and she already has a job she loves.

3. She can whip up a delicious meal regardless of what you have or don’t have in the fridge and pantry. But I keep her favorite pizza and Chinese places on speed dial for those days I can tell she’s in no mood to cook.

4. Her favorite wine is a New Zealand Sauvignon Blanc. Her favorite desert is chocolate torte. Her favorite guilty pleasure tv show is anything with hot firemen in it. And her favorite way to ….oh, this is PG so I’ll keep that last one to myself.

5. She’s a ringer at scrabble, crossword puzzles and word search games. While I kick her butt in trivia or spatial games like jenga. We love to play games. All kinds of games.

Five Things You Should know about Hatch

1. He can give you way more information than you ever thought you wanted to know about the various beers in his fridge—more than just where they were brewed. All kinds of boring stuff about the hops and yeasts and I don’t know what all. But he has turned me into a beer drinker thanks to some of the stuff he knows.

2. I could quote his quarterback stats in college and the pros but he’d get a big head so I’ll say he was decent in college, pretty good as a pro player but is even better as a coach. He has a way about him with the kids that make them both respect him and find him approachable if they have a problem off the field.

3. He snores after sex. (can I say that? Ok, I’m saying that). He doesn’t snore any other time. It’s quite the odd phenomenon.

4. His dream as a kid, besides being a football star, was to be race car driver—those long, skinny cars that drive on the roads mostly in Europe. I’ve watched a few of those with him on tv which I find about as excited as watching paint dry…or golf. Sometimes I’m convinced he thinks he’s driving a race car when we’re on the interstate, but he has never once gotten a speeding ticket in his life.

5. He does not kick my butt in trivia, we’re about even on that. But he is good at jigsaw puzzles and jenga and truly terrible at word games. 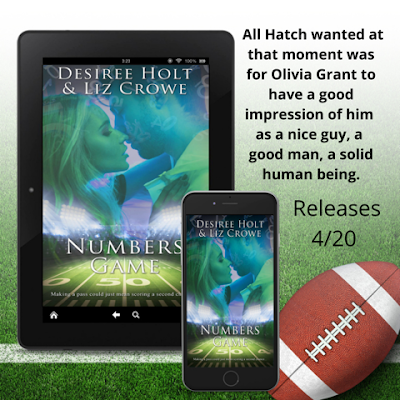 Making a pass could just mean scoring a second chance...

Former pro football player and coach Duncan "Hatch" Hatcher fumbled his career and marriage. Now divorced and ready to tackle his future, he has an opportunity to redeem himself as coach of his college alma mater's football team. But how can he turn the team's losing streak around and keep the secret of his downfall buried when the school agrees to a documentary that will allow a lovely journalist to dig her way into his past...and into his heart?

Olivia Grant's ex-husband almost wrecked her journalism career while he definitely did a number on her self-esteem. The documentary on Duncan Hatcher is the perfect way to rebuild both. As a freshman in college, she'd had a crush on the senior football hero, but he hadn't known she existed. She never expects the sparks that fly between them as they work on the project nor the struggles they must face if they both want to win.

Hatch winced at the memory of how goofy he must have sounded to the lovely woman he was going to be having a fair bit of contact with this season. Olivia Grant was, without a doubt, beautiful, not to mention sexy as hell. She was a natural reporter, putting him at ease, even in the face of his high-school-ish reaction to her at first. But dear Lord, the crap he’d said? That shit about her being “better than she thought” at the race? And “looking for a foot in the door”? He’d sounded about as slick as the grandpas he’d been named for.

He groaned and pressed his forehead to the leather blotter on his new desk. After his divorce, he’d made a point not to notice women, something that was a bit of a self-imposed penalty. But there was no not noticing Olivia. Her soft, dark blonde hair that kept dropping over one of her deep green eyes as she’d look down at her notes, then back up at him. That smile, and those full, barely lip-sticked lips. And there was no denying she had a body that would be hard to shake out of his brain. Scott had told him she used to play soccer here, a few years behind him as an undergrad. How he’d not known her… Granted, he hadn’t been a big partier then, kept mostly to himself and his close group of friends and, as always, focused on the game.

But damn. He’d missed out on something then, without a doubt. He felt his face flush red and his entire body begin to react in ways that didn’t really serve him well as a fully grown man, with plenty of experience under his belt, so to speak.

Thankfully, she’d left before he could embarrass himself any more.

Home. Shower. Beer. Stare at a string of old movies on the giant television screen. Anything to get the lovely Olivia Grant and all her many attributes out of his head. She was, after all, the media. And everyone knew how he felt about the media.

It was get-a-grip time—on all parts of himself.

This was his chance at redemption. The opportunity was a godsend, considering the sorry state he’d left his life in on the west coast, and he didn’t intend to do anything to screw it up. He couldn’t afford to get distracted by a single thing. But how the hell was he going to do that when Olivia Grant might prove to be the biggest distraction of all? 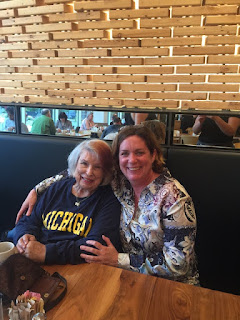 Signup for my newsletter and receive a free book:

Liz Crowe is a Kentucky native and graduate of the University of Louisville living in Central Illinois. She's spent her time as a three-continent expat trailing spouse, mom of three, real estate agent, brewery owner and bar manager, and is currently a social media consultant and humane society development director, in addition to being an award-winning author. With stories set in the not-so-common worlds of breweries, on the soccer pitch, inside fictional television stations and successful real estate offices, and even in exotic locales like Istanbul, Turkey, her books are compelling and told with a fresh voice. The Liz Crowe backlist has something for any reader seeking complex storylines with humor and complete casts of characters that will delight, at times frustrate, and always linger in the imagination long after the book is finished.