Science fiction romance writer Shari Elder is my guest today, and she's here with one of her favorite secondary characters. In fact, she liked him so much he got his own book! Please welcome Shari Elder. 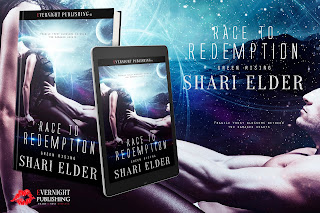 Thanks so much for having me over to your blog, Jana. I’m pleased to introduce one of my favorite secondary characters in my recent release, Race to Redemption.  Gold Captain, or Cap for short, is a stealth cyborg, capable of sneaking himself, or anyone with him, into almost anyplace – physical or virtual.

It’s a science fiction romance, set far into the future, where the known universe is organized into political coalitions, funded by mega corporations.  Cyborgs provide the security, and military muscle, when required. They are, consequently, universally feared. In the book, the heroine, Elaina, who hates borgs, finds herself unexpectedly needing Cap to sneak her into her own company’s headquarters. Cap proves to be something quite different than a killing machine. The easiest way to introduce you to Cap, is to share the snippet where Elaina meets him.

She shivered since the news-vids of cyborgs going off half-cocked and killing innocents seemed to be on the rise. This must be what siting next a rabid beast feels like.

“Know any good jokes?” she asked her companion, not expecting an answer. She needed to let out some steam and keep it friendly. Sitting in a small space with a volatile weapon that could go off any minute had her on edge.

“Yes.” His body remained taut, as if a tent pole had replaced his spinal cord.

Okay, that was unexpected. Enough to get her out of her own head, which was a place she didn’t really want to be. “You going to tell me one?”

“No.” He remained rigid as a statue. Maybe he was all machine?

“You guys always this much fun?” His hands loosened around the clutch. “Oh, my God, you’re joking with me.”

“I am human.” His voice vibrated like a tuning fork. “Parts of me, anyway.”

“What’s your name, partial human?” A grin tickled her lips.

To her own surprise, she chuckled. She hadn’t thought she had it in her, but she’d never met a borg that interacted, let alone joked.

“Tell me your real name. It’ll be our secret.”

“I don’t have one. They wipe our memories.”

“Don’t.” His black-gloved hand clenched the shift. If it weren’t perma-steel reinforced titanium, she was sure it would have shattered.

“You feel?” She had assumed otherwise.


Cap and Elaina become friends, of a sort, as she is forced to lay low at StormTech HQ. It’s their friendship that has her questioning everything she ever knew about how the world works even as her proximity to a cyborg confirms their dangerous nature. Here’s another view.

“I like you, Cap. Have I misjudged an entire race?”

“No, and don’t misjudge me either. I can and would kill you in a heartbeat if I’m ordered to do so. Once an order is given, a cyborg must obey. Something about you pushes at me. If I were fully human, I’d say you remind me of someone, but since that isn’t possible…”

Was that regret in his voice?


Like many writers, I fall in love with my characters.  I fell so much in love with Cap, that he’s getting his own story.  I’m working furiously trying to finish the Scent of Memory, Book #2 Green Rising, which is Cap’s romance.

What’s your favorite secondary character in any book and why?  Thanks for visiting.

A woman who lost everything.
Intergalactic storm racing champion Elaina Carteret had it all – fame, wealth, men – until a horrific accident took it away. To get it back, she agrees to pose as Lainie Carter, medical transport pilot and corporate spy. Her risk-taking attitude infuriates Dr. Erik Johansen, who runs the outpost with an iron hand, a permanent scowl and the tightest bod on the planet.

A man desperate for redemption.
Unable to forgive himself for a past tragedy, Erik works himself into an early grave. He has no patience for the insubordinate Lainie Carter, who can’t take an order, disrupts routine and flames his body to ash.

A planet at risk.
When the outpost is attached, they’re thrown together in a race across the desert to stop a deadly biogenetic weapon As a fragile trust blossoms between two damaged hearts, their pasts resurface and threaten their growing bond.

Erik tilted his head. Speech didn’t seem to be in him. She followed him to the bathing room at the back of the building. The small lump in the bath couldn’t be Sen. Whatever it was had gill-slits and grayish-green skin, no remaining golden hue of the Ranharran air breathers. No, definitely not Sen.

“Biogenetic tampering that forced his DNA to rewrite itself into Den Vedran but it was only partial. His gills are not fully formed, but the Ranharran lungs collapsed. I believe the Den Vedran lungs would have grown over them but not in time. The changes left him unable to take in oxygen from any source.”

She couldn’t get her head around what Erik was saying. Every cell in her body froze into numbness. Her blood stopped flowing. That just couldn’t be Sen.

“We should return him to the dust. Sen had a soft spot for Ranharran ceremonies.” How she coughed up those words she’d never know, but it was what Sen would want. If that lump were Sen, which it wasn’t.

Erik shook his head. “He’s not dead. I injected him with a stasis drug. It only lasts about two months. I’ll need to do so some tests on him.” His low growl told her the idea appalled him as much as it did her. She swallowed back an instinctive retort. He didn’t need her crap on top of the pile he already carried.

“For Qirta,” she said instead.

Gratitude flickered in those ancient eyes. She took his hand and leaned her head against his shoulder, desperate for touch. He let her without balking. A heart did beat underneath Erik’s scowl.

They stood together without moving for what seemed like a century. Fintarl brought in an air gurney at some point to move the body that wasn’t Sen to the lab. Everyone in the camp stumbled like the walking dead to get through the next hours. Ranharrans did not have tear ducts because their bodies were built to retain every ounce of water. They hummed in grief and the camp was awash in a low, melancholy drone.

I'm Shari.  By day, I crawl out of bed, mainline coffee, get my kid off to school, walk the dog, then save cities within the four walls of my office. Usually by email.

At night, I take off the suit, curl up with my computer and save cities on a jet-powered skateboard, make six-toed footprints on the sixth planet in the Andromeda galaxy and bring men and women, who had given up on romance, another chance to find it.

Join me on this journey.