When I started writing Finding Justice, the first book in my ongoing romance series with Harlequin Superromance, Marian quickly pushed herself forward as Templeton Cove’s “boss”. She’s in her sixties, funny, wise, a little bit naughty and very, very astute.

And an absolute joy to write!

So much so, I am pretty sure she has appeared in six of the seven books I have written so far.
She is the glue that holds Templeton’s community together – the oracle to whom the residents, young and old, come for advice…even if the advice they receive isn’t always welcomed at first.

Marian came to the Cove under a cloud of speculation about five years before the first book opens. A stranger to the Templeton, she arrived with long-standing resident George and they soon married. No one knows much about her background and no one dare ask! She’s loving, attentive and a bulldog to anyone who upsets her brood…in other words, anyone she cares for in the Cove.

It’s a dream come true that I’m writing a series that so many readers enjoy and are still asking for more stories. The Templeton Cove Stories are a mix of mainstream romance and romantic suspense stories that link existing characters and also new characters I introduce, as and when.

I am currently writing book 8 which is really Marian’s story – I have finally discovered her past and think it’s time I filled in the blanks for the devoted fans of the series. I am so excited for this book’s release but, unfortunately, it won’t be out until February 2018.

In the meantime, why not catch up with Marian and all her fabulous antics in the first six books in the series (Book 7 out in August 2017). You going to love her as much as me – promise! 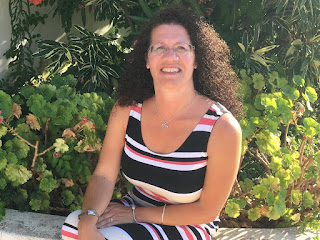 Rachel Brimble lives near the famous city of Bath in England with her husband of 18 years, their two teenage daughters and mad chocolate lab, Tyler. When Rachel’s not writing, you can find her reading, knitting or watching far too much TV.

All her books, including the Templeton Cove series, can be found at her website & be sure to follow her on social media. She loves connecting with readers!