Today author Patricia Preston is sharing a recipe with us. I love that this recipe plays such an important role in her novel Everything His Heart Desires, part of her Love Heals All series. Welcome Patricia! 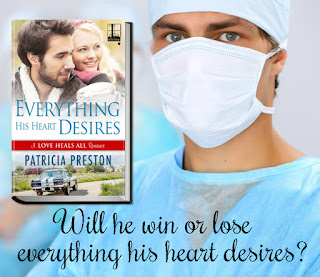 Thanks, Jana, for having me on your blog today. My recipe is for old-fashion banana pudding. The reason I’m sharing this recipe is that in my new release, Everything His Heart Desires, banana pudding plays a role beginning back when the hero, Brett, and heroine, Natalie, were in high school. Needless to say, they were not on good terms.

Here’s an excerpt from Chapter 1 where Natalie and Brett have been reunited after 15 years and they are at a meeting at the local hospital where Brett is now a cardiologist.

Growing edgy, Brett decided he would have a donut with his coffee. He was struggling to feel normal in a surreal situation.

As he reached in the box, Natalie said, “They didn’t have any banana pudding.”

He glanced up at her deadpan face. “Too bad.” He dumped the donut on a paper plate. Obviously, she remembered the cafeteria food fight back in the day.

He had actually started it by managing to fling a chunk of hot dog across the aisle and down her blouse. It was a lucky shot, and watching her fish it out of her bra had been hysterical.

Then she had walked over to the table where he sat with two of his buddies, both grinning, and a new girlfriend, who had her hand over her face. The cafeteria was quiet. All eyes were on Natalie. She put the piece of hot dog on his plate.

“I think you lost this.”

“Well, Brett,” she leaned in close. Way too close for his comfort. “I didn’t lose this either.” She snatched up the bowl of banana pudding that was on his tray and dumped it, bowl and all, on top of his head.

He swore as a piece of banana slid down his forehead, and on the other side of the cafeteria, Josiah, the tallest player on the basketball team, stood up and yelled, “Food fight!”

Chaos and a two-week detention had followed.

“I know you must be wondering why I called this meeting,” Sheldon said, and Brett shook off the recollection of washing dried banana pudding out of his hair. He’d never eaten banana pudding again…


Needless to say, during the course of the story, thanks to Natalie, Brett has to eat her great-aunt Clara’s classic homemade banana pudding and it becomes one of his favorites.

So here how Clara makes her classic banana pudding:

First, preheat oven to 350. A clear glass baking dish is preferred. That is Clara’s standard dish for making banana pudding. Using an 8-inch diameter and 3 inches deep dish, this recipe will make 4-6 servings. You can double the recipe for a large 2-layer pudding.

Get an egg separator and separate the yolks from the white. Set aside egg whites for meringue.

Put a saucepan on the stove, low heat and put butter in it to melt.

Mix flour and sugar. Add ½ cup milk to flour and sugar. Mix. Pour in saucepan with melted butter. Use fork to blend egg yolks. Add to pudding mix and whisk. Add remaining milk to pudding. Cook over low heat, stirring constantly. After a few minutes, the pudding will thicken. Note: you can add more flour to make pudding thicker, more milk to make it thinner, and more sugar to make it sweeter if you want.

Cover bottom of baking dish with vanilla wafers. Use as many or as little as you like.
Next layer banana slices on top of wafers. You can put as much banana as you like.

Meringue:
Note: This is an optional topping but it's required if you want the old-fashioned pudding, which Clara wouldn’t serve without meringue on top.

Put egg whites, vanilla and cream of tartar in large mixer bowl. Mix. (You can make it with just egg whites and sugar) Use electric mixer on the highest speed and gradually add sugar about a tablespoon at a time. Whites should foam and then start to get fluffy. When it forms peaks, it is ready.

You can circle the baking dish with vanilla wafers. Then cover the top of the pudding with the meringue. Put in oven to brown peaks of meringue. About 8 minutes. Be sure to check frequently so to not overcook. Remove from oven when peaks are light golden brown. Set aside to cool and enjoy! 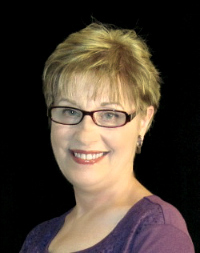 Patricia Preston is the author of the “Love Heals All” series comprised of single title contemporary romance novels that are filled with family, friends, drama and fun, set in the picturesque town of Lafayette Falls, south of Nashville.  She has historical romances, filled with adventure and passion, available, and she has also written Amazon best sellers in comic short stories. You can find all her titles on her Amazon page.  Her favorite place to hang out is her writing cave where must-haves are iced tea and epic music. She also enjoys photography, movies, and research trips to New Orleans.


For info on new releases and contests, sign up for her newsletter

Excerpt: EVERYTHING HIS HEART DESIRES

The man most likely to drive her crazy…

Growing up in Lafayette Falls, senator’s daughter Natalie Layton hid her sorrows behind a bright smile that charmed everyone in high school—except Brett Harris. Hardworking and highly motivated, Brett dismissed Natalie as a slacker. Instead, she’s become an acclaimed photographer. And when Brett, now a successful cardiologist, needs her family’s help to secure a coveted position, Natalie’s more than happy to prescribe a little payback…

Hailing from the wrong side of the tracks, Brett believed he could never win the school’s popular princess. Now he’s intrigued by the complex and compassionate woman Natalie’s become. Gaining her grandmother’s goodwill is the key to becoming chief cardiologist—and Natalie has no intention of making it easy. But as mutual mistrust gives way to pure chemistry, there’s more at stake than either ever expected—and much more to learn about matters of the heart…