Margo Bond Collins is my Guest for Recipe Tuesday!

Margo Bond Collins joins me today for Recipe Tuesday. I have to say I've never heard of buttermilk pie. She says it's a Texas recipe so I guess it hasn't made it to this side of the 49th parallel. Or I don't get out much! Thanks for being here Margo!

One of my favorite Texas recipes is buttermilk pie—and I am convinced that the best version is the one made from my grandmother’s recipe. Buttermilk pie is definitely something that would be served up at Maryann's, the restaurant where Clara goes to meet Mac, and discovers that she's been sent to meet up with her high school sweetheart, Mitchell MacAllan.

This is a type of chess pie–in fact, some of the older versions of recipes for it call it a buttermilk chess pie–and the trick to testing to see if a chess pie is “set” is to slide a cold, clean table knife into the center. If the knife comes out clean, the pie is ready.

The very best thing about buttermilk pie is the slight hint of tartness under the sweet, cold flavor. It's the perfect dessert for a hot Texas afternoon.  Enjoy!

In a mixer (set on low), combine eggs, vanilla, and buttermilk until well mixed. Add sugar and flour, continuing to mix well. Finally, add butter (still cold). When butter is spread evenly throughout mixture, pour into two uncooked pie shells. Cover the edges of the crust with foil to avoid burning. 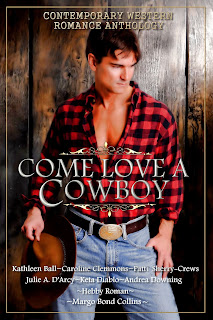 From firefighters, bronco busters, and wealthy ranchers to bad boys, we have them all for you! If you've ever wanted to fall in love with a sexy, alpha cowboy of today...now's your chance.

Luke’s Fate by Kathleen Ball
Meg O’Brien hoped never to lay eyes on the one man who broke her heart. To her dismay, Luke Kelly arrives at her ranch a much different and broken man. Can Meg ever forgive his callous treatment of her and help Luke become the man he used to be?

Grant Me The Moon by Caroline Clemmons
All Tory Fraser intended was to show her high school history club students a local archeology dig. How could she know the excursion would involve a murder?

Three for The Win by Keta Diablo
Hollis should have known better than to fall for a bone-melting man like Stede. He’s gone now and Eli is left to pick up the broken pieces of her life.

Border Affair by Hebby Roman
When his partners’ daughter is kidnapped in México, a self-made millionaire must confront his feelings about their affair and the future of their relationship.

Leaving Necessity by Margo Bond Collins
Mac has one week to convince his ex-girlfriend Clara not to sell his oil company. In this high-pressure reunion, can they strike love again?

The Shape of Destiny by Julie A. D’Arcy
A young male shape shifter. A beautiful female ranch owner. Can love be born in a web of deceit?

Desert Heat by Patti Sherry-Crews
A single mother struggling to keep her guest ranch puts her own desires on hold. When a handsome and persistent fireman sets his sights on her, she must decide how much she’s willing to give. 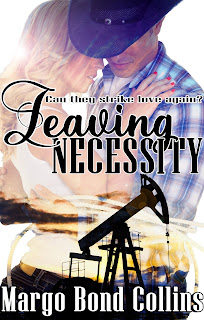 Can they strike love again?

At nineteen, Clara Graves left Necessity, Texas, to try to heal her broken heart. She swore she would never come back, and she's kept that promise for ten years. Until now. When she returns for her uncle's funeral, she inherits a small oil company that may keep her tied to Necessity for a few days longer than she expected. But as soon as she can close or sell the business, she's pointing her boots toward greener pastures.

To this day, Mitchell MacAllan regrets letting Clara go without a fight. But his whole life was in Necessity, and leaving town wasn't in the cards. As the foreman of Aerio Oil and Gas, he works hard to keep the townspeople employed and maintain the business, despite a recent downturn in petroleum prices.

Now Mac has less than a week to convince Clara that she should give Aerio a chance, and maybe even forgive him in the meantime. Otherwise, she will once again be leaving Necessity--and taking his heart with her, this time for good.

(also available as a stand-alone novella via Amazon: http://myBook.to/Leaving-Necessity)

Excerpt
Clara kept her seat as several townspeople came to offer their condolences, some for the second or third time that day. A cynical part of her couldn’t help but wonder how many of them were more interested in getting a better look at her after ten years in order to add fuel to the gossip fire than their sincere expressions and kind words might otherwise suggest.

That’s not fair, Clara. She could almost hear her uncle’s kind voice chiding her.

With a sigh, she finally stood up. “Tell me more about this oil company, Mr. Pritchard?”

The attorney nodded. “Of course. But really, Mac will be able to tell you more.” He gestured behind her.

When she turned to look, though, all she caught was a bare glimpse of a dark-haired man in jeans and a cowboy hat as he shut the door behind him.

“Mac?” she asked, turning back to Mr. Pritchard, whose brow creased in a frown.

“He’s the foreman now. Your uncle didn’t tell you any of this?”

“No. This is the first I’ve heard of the oil company.”

“Well, I’ll set up a meeting between you for tomorrow.” Bending to make a note on his calendar, he suddenly paused, then stood up straight. A worried expression flitted across his face. “If that’s okay.”

“Tell me again why I need to meet with him?” If it worried Mr. Pritchard, it might not be a good idea.

“The will stipulates that, if you are planning to sell Aerio, you must work with the current foreman of the company to conduct a thorough review of all aspects of the company before doing so.”

Clara tilted her head. “Is that even enforceable, legally?”

The twist of Mr. Pritchard’s lips gave Clara most of the information she needed. “Not following the guidelines could allow the sale to be challenged in court,” he clarified. “Although you might be able to get a judge to strike down the provision, it would take time and money that could be spent just as easily fulfilling the terms of the will.”

“Fine.” She smoothed down the skirt of her black dress before picking up her matching Balenciaga bag. “Give me a call once you have the meeting scheduled? Thank you again, Mr. Pritchard.”

As she walked out toward her rental car with its mismatched tire—the one she hadn’t yet had a chance to deal with—she tried not to think too much about the next few weeks. Still, she couldn’t help but realize that she had more to do here than she had anticipated.

I’m not going to be leaving Necessity as quickly as I had hoped.

But she was definitely going to get the hell out of Dodge—or at least Necessity—as soon as possible.


About the Author & Social Media Links

Margo Bond Collins is addicted to coffee (mmm...caffeine) and SF/F television, especially Supernatural (mmm...Winchesters). She writes paranormal and contemporary romance, urban fantasy, and paranormal mystery. She lives in Texas with her daughter and several spoiled pets. Although she teaches college-level English courses online, writing fiction is her first love. She enjoys reading urban fantasy and paranormal fiction of any genre and spends most of her free time daydreaming about heroes, vampires, ghosts, werewolves, and the women who love (and sometimes fight) them.

You can learn more about her at http://www.MargoBondCollins.net and follow her on all the usual social media outlets (listed below).

For updates about publications, free fiction, and other goodies, be sure to subscribe to her newsletter: https://confirmsubscription.com/h/d/03A21E5E161401F0