Sara Walter Ellwood makes a return visit to Journeys with Jana with a cover reveal for her upcoming releases. With further ado, here are Sara's beautiful new covers:


Coming in May in both Ebook and Print from 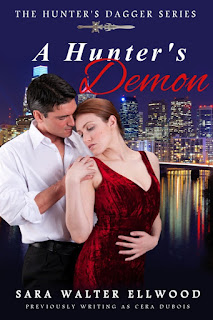 See where it all began….
With people disappearing from Philadelphia’s night streets, the Vampire Council fears they have a rogue on their hands. Special Agent Ian McHenry isn’t all that he seems. Not only is he the FBI’s expert on serial killers, he’s also the Council’s go-to vampire hunter. Detective Grace Wallace is tired of the FBI not believing her theory they have a serial killer on the loose—until Ian shows up on the case. Nothing prepared her for the instant attraction to the darkly handsome Irishman. As they close in on the killer, Ian’s desire for Grace grows stronger. But if he can’t control his inner demon, this true nature will destroy his only chance at love. 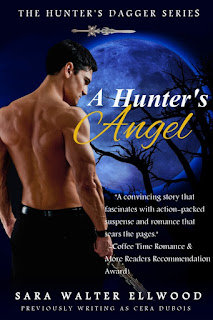 Blurb for A Hunter’s Angel
(book 1 of The Hunter’s Dagger Series):

The serial killer stalking Clayton, Pennsylvania, isn’t all that has Chief of Police Grace Wallace worried. For a year, she’s tried to forget Special Agent Ian McHenry and now he’s the expert the FBI sent to catch the killer. She can’t stay away from him, but something primal is telling her to run to save much more than her heart.

Despite the laws of the immortal council Ian vowed to follow as a vampire hunter, he fears Grace is his life mate which puts her humanity in peril. If he gives into the desire again to make her his forever, Ian will become one of the vampires his master destroys. But if he leaves Grace unprotected from the evil he’s hunted for over a century, she is in danger of losing her life… 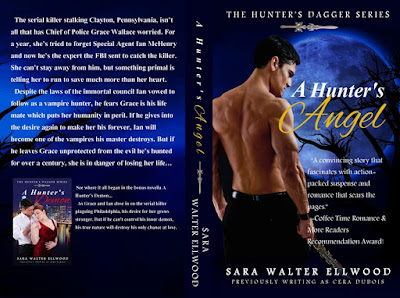 Although Sara Walter Ellwood has long ago left the farm for the glamour of the big town, she draws on her experiences growing up on a small hobby farm in West Central Pennsylvania to write her contemporary westerns. Her country upbringing even influences her paranormal suspense romances. She’s been married to her college sweetheart for over 20 years, and they have two teenagers and one very spoiled rescue cat named Penny. She longs to visit the places she writes about and jokes she’s a cowgirl at heart stuck in Pennsylvania suburbia. Sara Walter Ellwood is a multi-published and international Amazon bestselling author of the anthology set Cowboy Up.