5 Things About WHAT HAPPENS IN DENVER by Liz Crowe

Liz Crowe joins me today with a look at her new release, What Happens in Denver. Welcome Liz! 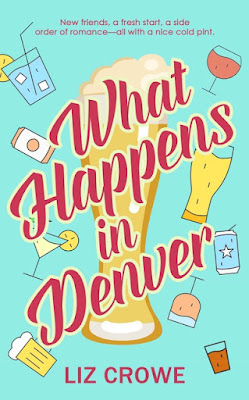 Top 5 Things to Know About What Happens in Denver

5.  The story is set in the world of craft beer. I draw on my own experience, helping found a brewery in Michigan, working my way into that world, then being somewhat unceremoniously dumped from the company. But many of the friends I made in my craft beer journey are amazing and I learned a lot about the business from brewing, to marketing and sales and distribution. And I have used the craft beer setting a lot in my books—this time for a chick lit style romance.

4.  It is the story of one woman’s (Andi Rigby’s) journey from the top to the bottom and then her climb back up. It focuses on her new friendship with Sloane and a surprise new romance with a hot, beardy brewery guy named James. But the focus is less on her relationship with him and more on her coming to terms with what she has done in her life and what she plans to do going forward after everything falls apart.

3. Her new friend Sloane has serious body dysmorphia. In short, the woman is anorexic and the story focuses a fair bit on how we women tend to define ourselves by how we appear to other people based on society’s insistence that we be a certain size or look a certain way. I have received a bit of criticism for my “over-emphasis” on weight and body issues but I tend to write books that come from my own experiences and as a 54 year old woman, I can tell you that for most of my years I have been on some form of a diet or another and frankly, I’m tired of it. But this obsession with bodily perfection sometimes can take a dangerous turn for some women, and Andi learns that Sloane needs her friendship more than ever during a particularly tough period for her.

And the Number 1 thing to know about WHAT HAPPENS IN DENVER….

You’ll learn a lot about craft beer, even more about Andi’s story, and be able to cheer her on as she recovers from the low blow her ex-husband strikes by emerging stronger, with a new friend, and a bonus new boyfriend in the bargain! 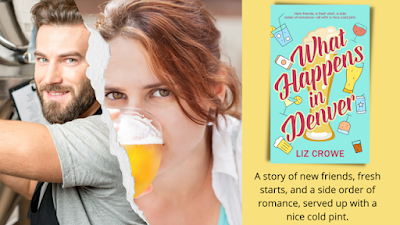 Meet Andi Rigby. She and her husband own a famous bar. Andi can mix a cocktail, change a beer keg, soothe ruffled customers, and drink you under the table — all within the same hour. Life is good, until the day she finds herself both divorced and unemployed. After a suitable period of ice-cream and whiskey infused mourning, she heads to a beer fest in Denver on a mission to rediscover her joy, not to mention a new job.

Between fielding gossip, saving a drunk woman from herself, and dodging a hot, but ill-advised boozy hookup, the weekend doesn’t go quite as planned. She ends up employed with an unexpected bonus—a new friend. Oh, and the guy she kissed? Turns out her new job includes selling his brewery’s beer. No big deal. Except the bit about him being practically perfect for her at a moment she’s determined to focus on her own success.

A story of new friends, fresh starts, and a side order of romance, served up with a nice cold pint.

I opened one eye, already knowing who it was and figuring it for some kind of effed-up karma. “If you must.”

I moved my shoes down to the sidewalk and shifted as far to the left armrest as I could. James Burke plunked himself right in the middle of the thing.

“Do you mind?” I crossed my legs to avoid having our thighs touch. I wasn’t in the mood for flirting or otherwise. I’d just done something great for myself for the first time in over a year and didn’t feel like sharing the victory.

No matter how good-looking said potential victory- sharer might be.

Or how close he was sitting to me.

“Don’t you have a Burke Brothers beer dinner to handle?” He didn’t. I knew, thanks to my new-found stalkerish behavior. I’d discovered the brothers weren’t hosting one this year. Odd. This would have been a great way to showcase their new quality-problem- solved brews to their fellow professionals. But it was their brewery, not mine.

“Nope,” he said, putting his hands behind his head and stretching out his long legs.

“Nice manspreading, dude,” I said in my prissiest voice.

“Nah, not really.” He glanced at me, then bent his knees and opened his legs out to each side, jamming me even farther into my corner. “Now this is nice manspreading.”

Without even thinking about it—and thanks to my three martinis—I twisted around and plopped my legs on his lap. He grinned, grabbed my left foot and dug his knuckle into my arch. I tensed, until my poor battered foot relaxed.

“Oh...my God...yes.” I closed my eyes and let him do what he would, no longer caring that we were making a spectacle of ourselves.

After a few moments, he switched to my other foot. I shivered and sighed again, stretching out like a cat until I realized my hips were practically on his lap.

“Oh, I’m sorry,” I said, shifting away until only my feet were there. He shot me a look that made my face flush hot. “Okay, I’m good. Thanks much.” I rotated and put my feet back on the sidewalk where they belonged.

“My pleasure,” he said, his voice soft and low.

“So quick to judge,” he said, stretching his arms back and his legs out again.

When he closed his eyes, I allowed myself a quick, up-close assessment, which was a bad idea, in my weakened state. I’ve established that the guy could pass for an NFL player with his wingspan, immense shoulders, and ever-so-long legs. His beard was neatly trimmed off his neck and cheeks. The matching dark brown hair was thick and a bit on the long side, which made me have to curl my fingers into fists to keep from touching it.
Oh boy. Where did that come from?
It came from the bottom of your third martini glass, you silly girl.

I jumped to my feet. James opened his eyes, slow and easy, as if knowing I was about to make a panicky bolt for it and figuring he should go slow, to treat me as if I were a rabid animal trapped under his front porch. Forcing myself to relax and smile, because I was in control of this, after all, I picked up my shoes and made a point to look at my phone screen.

“Don’t stare. It’s rude,” I said, my finger poised to call for a ride.

I sighed and looked at the darkening sky, never more aware of how badly I did want to sit with him, to have a beer and a chat. But I was determined not to develop bad habits, like the one that had landed me with Matt in my post-grad years.

I would not—could not—allow myself to do anything more than drink and enjoy his company, then I’d get my sorry tail back to my hotel and pack. I had a lot of things to do after all. I had a move to plan.

I flinched. I’d been standing here too long, not answering him. My inner polite young lady kicked in. “Sorry. Um, sure. Okay.”

“Don’t get too excited about it.”

Liz Crowe is a Kentucky native and graduate of the University of Louisville living in Central Illinois. She's spent her time as a three-continent expat trailing spouse, mom of three, real estate agent, brewery owner and bar manager, and is currently a social media consultant and humane society development director, in addition to being an award-winning author. With stories set in the not-so-common worlds of breweries, on the soccer pitch, inside fictional television stations and successful real estate offices, and even in exotic locales like Istanbul, Turkey, her books are compelling and told with a fresh voice. The Liz Crowe backlist has something for any reader seeking complex storylines with humor and complete casts of characters that will delight, at times frustrate, and always linger in the imagination long after the book is finished.

SIGN UP FOR THE LIZ NEWSLETTER & GET A FREE BOOK: https://landing.mailerlite.com/webforms/landing/r2a2q5