Clothes Make the Character: DRAGONS WALK AMONG US by Dan Rice

Dan Rice is visiting today with his YA Urban Fantasy, DRAGONS WALK AMONG US. I always love posts about what a character is wearing because clothes give real insight to their personality. Dan's character Allison is positively brimming with personality! Thanks for joining me today Dan. 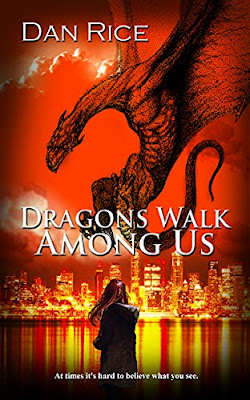 In my YA urban fantasy, Dragons Walk Among Us, heroine Allison Lee's style can best be described as a cross between punk and goth. Her preference is for dark clothing, but, being a photographer, she has a deep appreciation for contrast. So you might see her wearing an oversized black sweatshirt featuring a white sketch of a goth kitty cat––think Hello Kitty but with a piratical eyepatch.

She typically wears skinny jeans, black, of course. The usual T-shirt or hoodie she wears, depending on the amount of Pacific Northwest gloom dialed in for a particular day, is always one or two sizes too large for her diminutive frame. For footwear, she opts for comfortable sneakers during the summer and boots to keep her feet dry during the rainy season, which is every season that's not summer.

Dragons Walk Among Us takes place in the late fall and winter. A cold front brings a freak early snow to the Pacific Northwest. Allison dresses accordingly, choosing practical attire––a heavy black winter coat and scarf. She neglects to wear gloves, though, because handwear makes manipulating her camera's controls difficult. Yes, she'd rather have icicles for fingers than miss taking the perfect picture due to heavy winter gloves.

Her pride and joy is her forest green hair, which she often refers to as her mop. In her absolutely 100% correct, factual opinion, forest green is the most fabulous color in the world. It reminds her of the forest and trees, which she loves despite not being an outdoors person. Like many of her generation, she's deeply concerned about climate change and the environment in general. She often photographs the local climate marches organized by her BFF, Dalia, who incidentally dyes her hair neon pink.

After surviving an unprovoked attack, Allison briefly has a scar on her forehead. She thinks it makes her look dangerous like a femme fatale. Her forest green mop covers up the wound, ruining the effect. Still, she'd like to meet her mysterious attacker again, only this time she is the predator.

Shutterbug Allison Lee is trying to survive high school while suffering the popular girl's abuse. Her life is often abysmal, but at least her green hair is savage. Her talent for photography is recognized by the school paper and the judges of a photo contest.

While visiting her friend Joe, a homeless vet, Allison's life irrevocably changes after an attack leaves her blind. All her dreams as a photojournalist are dashed as she realizes she'll never see again. Despair sets in until she is offered an experimental procedure to restore her vision. But there are side effects, or are they hallucinations? She now sees dragons accompanying some of the people she meets. Can she trust her eyes, or has the procedure affected her more than she can see?

I sit at the dining room table for breakfast. After downing a second cup of coffee, I’m ready to head outside. I grab my heavy black winter coat, purple scarf, and black stocking cap from a closet by the front door. I rush back to the kitchen and take my camera out of the bag. The cool metallic and rubberized body of the mirrorless digital camera feels familiar in my hands. I turn the camera on, checking the battery life and the amount of free space on the two SD cards. Full battery power. Enough space on the cards for 2,000 shots. I smile, looking forward to heading outside, despite expecting to suffer from the biting cold.

The front yard is my photographic playground. I capture the sun as a starburst, backlighting the snow- laden branches of the cherry tree. Icicles hanging from the gutter catch my eye. The icy stalactites gleam golden in the light, almost like sparkling jewels. It reminds me of the glittering scales of the astral dragon. Don’t think about Dr. Radcliffe or his dragon. Don’t.

I bite my lower lip and notice my fingers are about as nimble as the icicles. I’m not wearing gloves to better manipulate the camera’s controls, the sacrifices an artist must make. I shoot for another twenty minutes or so, creating a visual scrapbook of the morning before the cold drives me inside. I rush to the kitchen where I find Dad sipping coffee while oatmeal simmers on the stove. 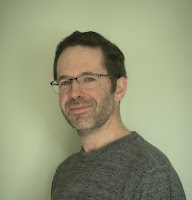 Dan has wanted to write novels since first reading Frank Herbert’s Dune at the age of eleven. A native of the Pacific Northwest, he often goes hiking with his family through mist-shrouded forests and along alpine trails with expansive views.

Dragons Walk Among Us is his debut novel. He plans to keep writing fantasy and science-fiction for many years. You can explore his blog at https://www.danscifi.com.

Email ThisBlogThis!Share to TwitterShare to FacebookShare to Pinterest
Labels: #newrelease, Dan Rice, Dragons Walk Among Us, The Wild Rose Press, YA Urban Fantasy