Jean Grant and The Hundred Trilogy

Jean M. Grant is my guest today and she's celebrating the creation of The Hundred Trilogy, a boxed set of her three medieval Scottish/Norse books in ebook format. She tells us how the trilogy came to life and came together. Congratulations Jean! 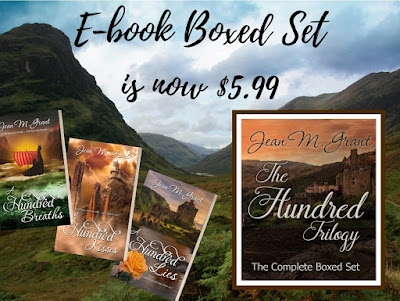 Tying a Trilogy Together

What seemed ages ago, but in the grand scheme of life, only about 6 or 7 years ago, I sat down to write another manuscript. With three “practice” novels written but shelved, I dug into a new story. I changed my time period from 12th to 13th century during the Scottish Wars of Independence, wove a mystical element into the story line, and on some invaluable advice of an agent, worked the heck out of that story to give it twists and turns to excite my readers. In 2017, A Hundred Kisses was born with the publishing house The Wild Rose Press.

The backstory of the heroine’s parents nagged at me. And guess what? When I looked at the history thirty years prior to the first book (which was 1296, and I looked back to 1263), lo and behold, it was a time rife with Norse-Scottish turmoil. The end of the Viking reign to boot. That story came forth in a flurry, and I found myself contemplating the third book in what was now becoming a trilogy. A Hundred Breaths (the prequel, and book one) released in 2019. Fast-forward to 1322, a time after the Scottish Wars of Independence, and A Hundred Lies was born, wrapping up my trilogy.

Each story is a standalone, but they can be read in or out of order. Each story tells a tale of a MacCoinneach family member “gifted but afflicted” with a mystical ability that comes at a cost: to heal but lose your own breaths in return, to feel auras/lifebloods but to feel others’ pain, and to see the future but to be unable to prevent the visions unless refraining from touch. Conquering Norse, Scottish lore, Ancient mystics, and invading English…the trilogy has a bit of everything. Can our mystical family hone their gifts for good, escape curses, discover mercy, find home, and find love?

With the encouragement of a few readers, I added supplemental material on my website to those interested: a genealogy/lineage chart of the family over three books, a glossary of people, places, and things, and medieval Scotland map. Check it out: https://www.jeanmgrant.com/extras

The MacCoinneach family is gifted but afflicted. Deeply rooted powers of healing, feeling, and prophecy run in their bloodline. Descended from the Norse and mystical Ancients of the Isles, they must each face the curses associated with their ability…they must each find the path to love. Norse invasions, Scottish fights for independence, and the plights of the mystical isles’ people come together in The Hundred Trilogy.

Gwyn of Uist is a merciful Healer but loses breaths of her life with every healing charm. She barters an alliance with a Scot bent on revenge against her Norse kin, in the hopes to save her brother from their abusive father. But can she and Simon MacCoinneach outwit her betrothed and bring an end to the Norse-Scottish bloodshed when it will take all her breaths to save Simon on the battlefield?

Deirdre MacCoinneach feels the lifebloods of everyone around her…but vows to discover if her gift killed the men she married. Under the facade of a trader, Alasdair Montgomerie travels to Uist with pivotal information for a claimant seeking the Scottish throne. A cruel baron hunts him, leaving little room for alliances with the lass he meets along the way. Amidst ghosts of the past, Alasdair and Deirdre find themselves falling together in a web of secrets and the curse of a hundred kisses…

Rosalie Threston’s fortune-telling lies have caught up with her and she’s on the run from a ruthless English noblewoman. Rosalie finds refuge in the halls of Eilean Donan castle deep in the Highlands, and in the arms of the laird’s mysterious son, Domhnall Montgomerie. Terrible visions plague Domhnall and he avoids physical contact to temper them. When an accidental touch reveals only delight, he wonders if Rose is the key to silencing the Sight. Mystical awakening unravels with each kiss. But can Domhnall embrace his gift in time to save her life, even if it means exposing her lies?

Jean’s background is in science and she draws from her interests in history, nature, and her family for inspiration. She writes historical and contemporary romances and women's fiction. She also writes articles for family-oriented travel magazines. When she's not writing or chasing after children, she enjoys tending to her flower gardens, hiking, and doing just about anything in the outdoors.

Posted by Jana Richards at 1:54 PM