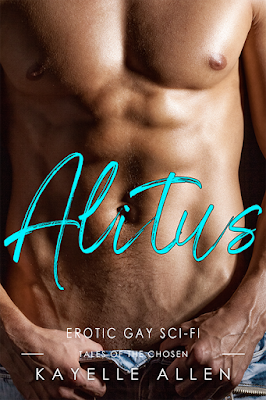 The character Alitus lives life in a personal lockdown -- not because of ill health or being shy. Alitus is addictive. He can touch no one.

Conceived as a Better, an enhanced human, Alitus spends his days working for Her Majesty Rheyn Destoiya, better known as the Conqueror. As her personal assistant, he manages every aspect of her life, and no one gets through to the Empress without going through him. They say it's harder to get an appointment with him than it is with her. So here are five things he will never do:

1. Alitus will never give up. He's determined that no matter what life throws his direction, he will overcome it and move forward. Even while not being permitted to touch another living person.

2. Alitus will never know what it's like not to have a friend. He is friendly, but that's not the reason. One of his special attributes as a Better is that if he touches a person, that person will like him and seek to help him. It's one reason he's not permitted to touch people. If he were, he would quickly gain control.

3. Alitus will never be allowed to use his natural voice. The voices of Betters are pleasant to the human ear, but there is a harmonic undertone that enables them to take control of another person's will.

4. Alitus will never tire of hearing stories about his parents. They were killed when he was fifteen, during a riot aboard a space station where they worked. They had done nothing to anyone and were not taking part, but to control the riots, the Praetorian Guard jettisoned modules of the station. Once exposed to outer space, his parents died almost instantly.

5. Alitus will never forget a kindness shown to him. Because he lives such an isolated life, when others speak to him and allow him to take part in an activity or to join a group, he appreciates it.

Promoted to Minister of Imperial Intelligence, Alitus has a newfound joy -- working with others. His days are filled with requests for assistance and information, and he loves providing it. That is, until a friend of the Empress accuses a lover of being unfaithful, and the Empress asks Alitus to help prove it. His access permits him use of any recording device in the Empire, so the task won't be hard. But this is one request he fears fulfilling above all others. Why? The affair is with Alitus himself.

Up to now, hiding what Wulf means to him has taken discipline and denial. Now, it will take a miracle...

Jawk, which completes the series, is available on preorder.

Kayelle Allen writes Sci Fi with misbehaving robots, mythic heroes, role-playing immortal gamers, and warriors who purr. She is the author of multiple books, novellas, and short stories. She's also a US Navy veteran and has been married so long she's tenured.

Sign up for her newsletter and get free Sci-Fi stories, book recommendations, and become a Tarthian Empire citizen (and an immortal), among other reader exclusives. https://kayelleallen.com/immortality