The Last of the Gifted Series by Marie Powell

Today my friend Marie Powell is my guest. Marie and I both belong to the Saskatchewan Romance Writers. I no longer live in Saskatchewan but I've maintained my friendships there. I am currently reading, SPIRIT SIGHT, book 1 in Marie's Last of the Gifted Series, and I have to tell you it's a fabulous read. It's a combination of historical novel, fantasy, paranormal and romance. A definite winning combination. Marie's going to tell us about how one of her favorite secondary characters in the Lasted of the Gifted series became the star of her own series. Thanks for being here, Marie! 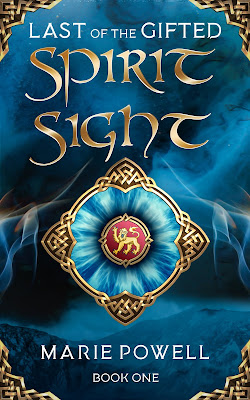 The Fate of Five Daughters:

Often it’s the footnotes in history that offer the most interesting tidbits for a writer. That proved true in my research for Last of the Gifted, my new award-winning fantasy series set in 13th Century Wales.

The fall of the House of Aberffraw was neither gentle nor expected. On December 11, 1282, Llywelyn ap Gruffydd was lured to a field near Cilmeri and killed. For more than six months after that, his brother Dafydd managed to stay one step ahead of some 10,000 troops of the ruthless Longshanks (Edward I of England) as these forces pursued him from castle to castle through a mountainous area about the size of Cypress Hills.[An area in southwestern Saskatchewan of about 1000 square miles].

During that flight, his wife Elizabeth (de Ferrers) and close to a dozen children accompanied him. Two of these were his children with Elizabeth: Owain and Gwladys. He also had care of his brother’s daughter, Gwenllian, who had been born the previous June. And the records show that either five or six of Dafydd’s illegitimate daughters were also in his care when would-be Prince of Wales was finally captured by the English in June 1283.

These women and children are only footnotes in Dafydd’s story. The fate of Owain, Gwladys, and Gwenllian was recorded, as King Edward made arrangements for them to live out their lives in English abbeys and castles far from their homeland.

But what happened to the five illegitimate girls? How did Elizabeth feel about her husband’s six girls? And when and how did they all come together in the first place? On these issues, as too often is the case with medieval girls and women, the records are silent.

But in the mind of a novelist -- or at least, this novelist -- a gap in time of six months can expand into a two-book series. And a gap in the records that includes so many lives could also become fodder for a novel (or a series of novels). Who were they, how old were they, and what might have been their fate?

As one possible answer, my character Margred sprang to life on the pages of Last of the Gifted. A raven-haired beauty, she is fiercely loyal to her friends (even those that don’t deserve it) and fearless to the point of recklessness. You guessed it: she’s also the oldest of those illegitimate daughters.

Although she began as a secondary character and ally for Catrin through Spirit Sight (Book 1) and Water Sight (Book 2), she’s now gaining a life of her own. I already have a 23-page document that outlines her personality and her backstory - complete with Internet images of a young Catherine Zeta-Jones to inspire me. Margred has become the focal point for her own spin-off series, and I’m working on it now. Watch for more about it this fall! 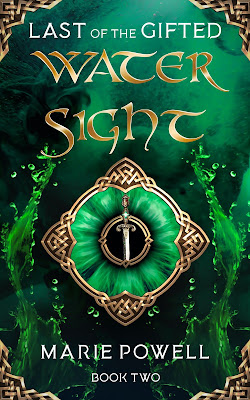 Two siblings pledge their magic to protect their people from the invading English, with the help of the last true Prince of Wales -- after his murder.

“…Filled with adventure and romance and a touch of fantasy … Highly Recommended.” 5 Stars – CM Reviews

Warrior-in-training Hyw can control the minds of animals. His sister Catrin can see the future in a drop of water. Hyw’s gift—seeing through the eyes of birds and animals—could win him a place in the Prince of Wales’ bodyguard. But ambush and murder force Hyw to stretch his gift in unexpected ways. The slain prince’s spirit melds with Hyw’s psyche to help guide him in fighting back against the English. Catrin sees visions of disaster and death. She must convince the young nobleman she’s pledged to marry to help prevent the genocide she foresees. When Hyw and Catrin reunite, they are all that stand between their people and the invading English army.

The Prince of Wales needs three magical relics to rally the straggling Welsh forces. Catrin’s gift of Second Sight may be the only hope for success—if she can outwit the English lord who wants to use her gift to capture the prince. Her brother Hyw is on the run with the prince and the dwindling Welsh army. To escape the betrayal dogging their heels, Hyw takes refuge in his evolving gift—until shifting shapes puts his humanity in jeopardy. With Hyw trapped in his magic and her betrothed in an English jail, Catrin faces an impossible choice: save her brother, or save the man she loves.

Excerpt from the opening of Spirit Sight:

He raised his arms, feeling bone and feather flatten against the wind, and knew himself tethered to air currents that smelled of salt and fish, somewhere off the horizon.

He ran below the bird, yet his mind and the hawk’s mind moved as one. He could feel the dry December grasses beneath his bare feet, but he saw as the hawk saw: a flash of grey fur in the stubble, the swaying pattern of a tree branch.

He tried to turn the hawk’s mind—his mind—to his will, and for a moment he succeeded. In the distance he could see the stone watchtower of his home at Garth Celyn, seat of the royal court of Wales. But the hawk’s need was powerful, turning him back to scan the ground they circled. If he squinted—just so—at the yellow and russet clumps, he could make out the leaves of each tree. A shadow flitted from branch to branch.

No, not his. It was the hawk’s beak that longed to rip the flesh from bone and feather. Hyw grasped the bird’s thoughts again and turned its head toward Prince Llywelyn’s tower. There! A streak of movement across the grass. Was it some grotesque beast from the past? He urged the hawk to circle until he could see it more clearly. A single horse and rider galloped toward Garth Celyn.

A messenger! Fast horses in wartime never bring good news. Had the English broken the peace again? Hyw gasped, and his connection to the bird faltered.

The hawk gave a piercing shriek. Hyw felt himself falling, as if he’d dropped from its talons rather than its mind. His feet—the same feet that had seemed to barely skim the ground a moment ago—thudded against the earth. He stumbled and the momentum of his running threw him, over and down until he braced his hands against the mountainside…

Marie Powell’s castle-hopping adventures across North Wales to explore her family roots resulted in her award-winning historical fantasy series Last of the Gifted. The series includes two books to date, Spirit Sight and Water Sight (participation made possible through Creative Saskatchewan’s Book Publishing Production Grant Program). Marie is the author of more than 40 children’s books with such publishers as Scholastic Education and Amicus, along with award-winning short stories and poetry appearing in such literary magazines as Room, subTerrain, and Sunlight Press. Among other degrees, she holds a Master of Fine Arts (MFA) in Creative Writing from UBC. Marie lives on Treaty 4 land in Regina, Saskatchewan. Find her at mariepowell.ca

Last of the Gifted - https://mariepowell.ca/young-adult/last-of-the-gifted/