New Short Story from Cynthia Terelst: IN THE DOGHOUSE

Cynthia Terelst joins me today for a look at her new short story, IN THE DOGHOUSE, which is an introduction to her Love Down Under series. Welcome Cynthia! 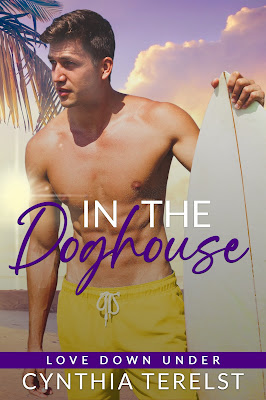 Could you survive 10 days in a car with the person who destroyed your faith in love?

Chloe has nothing good to say about Alex. Not since the day he deserted her, leaving their future in tatters.

Alex’s heart has remained true to Chloe during their five years apart. All he needs to do is convince her to give him a second chance.

Much to Chloe’s dismay, a simple promise finds her driving Alex across the outback to his sister’s wedding. Will they make it to the end together or will their fractured past destroy their chance at love?

In The Doghouse is an introduction to the Love Down Under series. This short story was previously published as Back To You in the Steamy anthology. It is a stand alone romance with medium heat. 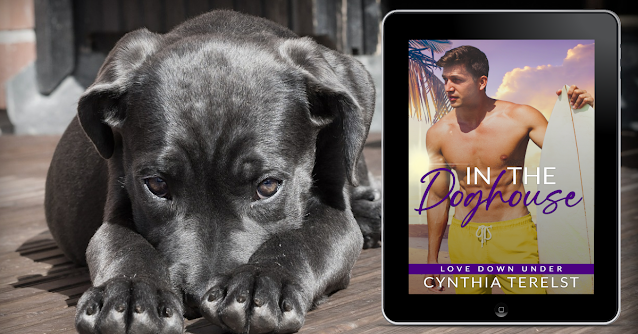 “I’m nearly there,” I said to Sam as I turned onto her street. The leafy trees arched across the road. Dappled light filtered through the thick canopy.

She laughed. “Late as usual.”

“I’ll be pulling into the driveway any second now.” I imagined her rolling her eyes.

“I’ve packed everything you and Rex will need: water and food bowl, food and his bed.”

I turned into the windy driveway and made my way to the house.

“Thanks for bringing Rex. I can’t imagine getting married without my second-best friend.”

“Lucky you said second. Because only your best friend would drive your scared-of-flying dog over 3000km for your wedding.”

She laughed. “Trust me, it was easier to get him up here than get all of Rob’s family down there.”

“Corey knows we’re not driving straight there? That I want to stop and do things along the way?”

Silence. Unusual from my best friend.

One last bend and the brick house came into sight. What the fuck? The man standing next to Rex on the porch was not Corey. He began to raise his hand in greeting. I slammed on the brakes. His hand stopped.

I needed to get out of there.

Without thinking, I put the car in reverse. What was I doing? I couldn’t just leave. I needed to pick up Rex.

I stared at the man and golden retriever. They stared right back.

“Why is Alex here?” My heart beat fast.

“So you can give him a lift. Remember, I said the flights were booked out?”

I clenched my teeth and took a deep breath. I remembered the conversation word for word. She asked if I could take her brother with me. She never said which brother.

“You led me to believe I’d be taking Corey.” I tried to keep my voice calm but it had a distinct edge.

“You never corrected me.”

Alex was talking to Rex, scratching his favourite spot behind his ears. I tried to drag my eyes away from Alex. I tried not to notice how good he looked. How his jeans hugged his thighs and his t-shirt stretched across his chest. I imagined the sight if he turned around. The way his jeans would—

I directed my attention to Rex, who was waiting patiently, his bum parked firmly, looking between Alex and the car. Alex produced his phone and his fingers moved across the screen.

I couldn’t believe my best friend would do this to me. She knew how I felt about her older brother.

“Alex wants to know if you’re actually going to drive the rest of the way to the house.”

I gave him the finger. I regretted that she couldn’t see it as well.

Sam tapped on her phone screen, her nails making rapping sounds like machine gun fire. Was she texting him?

“Five years, and that’s how you greet me?” Alex’s voice came through my speaker.

She freaking added him to our call.

“Yeah, well, it was better than running you over.”

His deep voice still had the same effect after all these years. My stomach leapt like a surfer’s did when catching a big wave. First, my best friend lied to me. Then, my body betrayed me.

Stuff it. We were all adults here. I put the car in drive and drove the last ten metres.

“I’ll see you in ten days. I can’t guarantee Alex will survive the trip.” I disconnected the call.

Email ThisBlogThis!Share to TwitterShare to FacebookShare to Pinterest
Labels: contemporary romance, Cynthia Terelst, In the Doghouse, Love Down Under series