Fellow Wild Rose Press author Helen C. Johannes joins me today with a look at some of her secondary characters in her new release, LORD OF DRUMARWIN. She also shares 5 quick things about herself which gives us a chance to get to know her better. Welcome Helen! 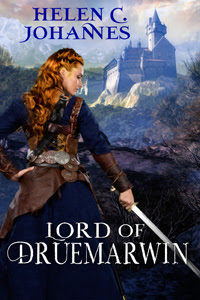 In Lord of Druemarwin I knew my hero’s mother would play a significant role, but I didn’t expect her to spring almost fully formed from her very first scene. Most of my characters reveal themselves as I write the story, deepening my understanding of their backstory and motivations, but Lady Vyenne jumped onto the page like Athena from Zeus’s head. I knew her; maybe that’s because she’s a mother, the first one I’ve committed to writing. Like me, she’s a problem-solver, a let’s-get-this-done person who knows what it’s like to grit her teeth and out-stubborn a stubborn child of any age. Unlike me, she’s rich, meddling, and politically shrewd. Her mantra is calm, control, discipline. And she’s running for her life.

Her sparring partner, and my other favorite secondary character, is my heroine’s slightly older brother Toth. His role is guardian, and he takes that to mean all family and soon-to-be family members come under that directive. He’s a sharp-eyed, simmering volcano whose own backstory is as messy as Vyenne’s. And he and his sister Raell, my heroine, love/hate each other as only close siblings can, at least according to my own children.

And then there’s my most fun to write minor character, the old healer Gam. She’s a practical woman whose philosophy about aging is, “A dozen wrinkles or a hundred, m’lady. Once you’ve got ‘em, no one notices more.” Her advice to Raell about defending herself: “Aim for the nose, lass. Hurts like the Demon, blinds ‘em a bit an’, Sisters willin’, drives a bit o’ bone into the brain,” is followed by a gap-toothed grin after they’ve just fended off an attacker. Old Gam’s occasional appearances provide some tongue-in-cheek perspective on the younger folks’ drama.

- Beach vacation or sightseeing in the city? - Beach or cruise. Living land-locked, I’ve discovered an affinity for the calming effect of being at the water’s edge.

- Coffee or tea? – Tea ever since my first trip to England; I love Darjeeling, English Breakfast, Scottish Breakfast, and Assam teas.

- E-book, paperback or audiobook? – E-book and print both. I’m a compulsive reader; if there are words, I’ll read them regardless of format.


LORD OF DRUEMARWIN - PAGES FROM THE HEART Winner in Fantasy Romance

In a world of lies and betrayal, can they trust each other?

Lady Raell can fight, ride, and argue politics as well as her brothers. Only being mistress of her father's household keeps her in skirts. In Naed, the new Lord of Druemarwin, she has found devotion, a kindred spirit, and a marriage promise. But when a forgotten and unwanted betrothal comes to light, she has no choice but to run.

Amidst sweeping revolution, Naed must rally his people, fend off assassination attempts, and fight against claims he's a traitor. Then he discovers everything about his lineage and family is a lie. And his beloved belongs to another.

With lives and a kingdom at stake, Raell and Naed must find a way to protect the innocent and save their love.

Aye, it wasn’t. They stood in torchlight on an open parapet while assassins stalked them, but this might be her only chance to reach him across that precipice he’d thrown up between them, to secure the future they were meant to share.

The world had gone silent; Raell could hear nothing over the rush of blood in her ears, the terrible heavy beats of her heart while she waited, dizzy with fear, breathless with longing, for the man she loved to respond with a word, a look, even a blink. Even a shift of his gaze she’d take as a sign he’d at least heard, mayhap begun to consider—

“Yes, be honest, Lord Naed,” said a voice she’d heard but once, a voice that raised all the fine hairs on her body and made her innards contract into a cold, tight knot. “Tell us both how much honor means to a bastard who’s betrayed his countrymen and his blood.” 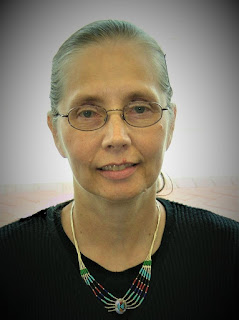 Helen C. Johannes writes award-winning fantasy romance inspired by the fairy tales she grew up reading and the amazing historical places she’s visited in England, Ireland, Scotland and Germany. She writes tales of adventure and romance in fully realized worlds sprung from pure imagination and a lifelong interest in history, culture, and literature. Warriors on horseback, women who refuse to sit idly at home, and passion that cannot be denied or outrun—that’s what readers will find in her books.

Contact email: helen.c.johannes@gmail.com
Posted by Jana Richards at 12:30 AM