Lucy Naylor Kubash visits today to tell us what her pets, and animals in general, mean to her. Lucy shares some adorable pictures of her pets. Her love of animals finds its way into her books as well. In her newest book, WILL O' THE WISP, the heroine's desire to rescue horses plays a central role in the story. Welcome Lucy! 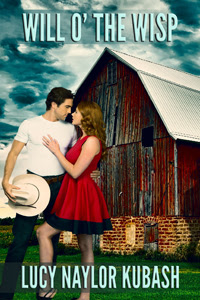 From the time I was born, I’ve always had pets, usually more than one. Dogs, cats, canaries, a guinea pig, and chickens. When my kids came along, we amped up the menagerie to include not only the above but hamsters, parakeets, finches, a hermit crab, an assortment of aquarium creatures, a lizard, and a horse. Once we had a fish that proved to be a threat to all the other fish in the aquarium, and so we had to isolate him. Then he got some fish disease, and I ended up spending more on drops to treat him than what I paid for the fish. He recovered and went on to live a long mean fish life. So, it’s fair to say animals have played a big role in my life.

In 2002, a friend of mine asked me to take over writing a column she was doing for a small local weekly newspaper. Her husband was ill, and she didn’t have the time for it. I’d had short magazine stories published but never written a column. She assured me it would only be for a month, maybe two. I agreed to do her a favor. Seventeen years later, I’m still writing that column, now called the Pet Corner. I never would have thought I could come up with enough ideas to keep that column going this many years, but I guess when it comes to pets, there is always something else to say.


In my column, I advocate for homeless pets and encourage owners to spay and neuter their pets, so as not to contribute to the overpopulation of animals in shelters and foster homes. I’ve talked about how not to attract wildlife to your house, keeping pets safe in the cold of winter and the heat of summer, and have even in the past few years, written about my visits to horse sanctuaries out West. One of my biggest concerns is for the wild mustangs that have been rounded up and wait in holding pens to be adopted.

My newest book, Will o’ the Wisp, from The Wild Rose Press, tells of Allison Delaney, who will risk her own safety to rescue an animal in danger. When she is faced with threats to her child and the animals who mean so much to her, she must also risk her heart.

In spite of a broken heart, Allison Delaney carved out a life for herself and her young daughter on her grandparents' farm. Her child and the horses she rescues are all that matter. Then a sudden threat to their safety puts her back in touch with Shane McBride, the man she never thought to see again.

Returning to the small town of Silver Creek brings back a lot of memories for Shane, ones he treasures haunted by the ones that made him leave, but this time he is determined to stay and make things right.

Trusting Shane may be her only choice, but now Allison fears not only the threat against her farm but the risk of losing her heart again.

Here is an excerpt, from WILL O' THE WISP:

The man who stepped from inside the truck was definitely not Doc. Tall, with shoulders stretching the faded fabric of his denim shirt and shiny black hair that glistened in the sunlight, he would have towered over Doc’s stocky figure. As he started toward the barn, she couldn’t see his face, but the easy swagger to his walk, the way he rolled his booted feet from heel to toe, spoke to her of things she thought she had forgotten. Had worked very hard to forget. Feelings she’d buried ten years ago.  Uncomfortable, she dropped her gaze to her daughter who had come to stand next to Gypsy.

“Is he Doc’s helper, you think?” Lizzie scrunched her nose. “I don’t think I know him.”

Sudden awareness clutched Allison’s heart, giving it an extra beat, as if to prove the man walking toward her was still easy on the eyes but hard on the heart. He’d certainly been hard on hers.

It would stand to reason Doc might call on him to give a hand. But why does it have to be my barn that needs visiting this morning? Her heart thumped hard in her chest as Shane McBride came closer, stopped short, and tilted his head back to get a better look at her. For a second, surprise lit his eyes to the color of the sky, then, sticking his hands into his denim pockets, he shook his head. A slow grin touched his mouth. The mouth she remembered so well.

“Allison,” he said in his slow, sexy way. “I…wasn’t sure it was you who called.”

Her throat closed up, and she had to clear it twice to speak. “I left the message on the machine. Do I sound so different?” After ten years, she supposed she did. Ten years could rob you of a lot of things, a lot of memories, especially if the memories meant nothing to you. 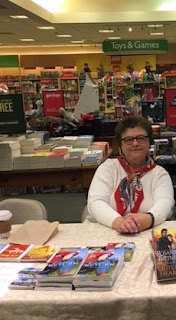 Bio for Lucy Naylor Kubash:
I have been writing for many years and was first published in 1983 in Woman's World magazine. I'm a long-time member of Romance Writers of America as well as the Mid-Michigan RWA chapter. Besides writing fiction, I'm also the author of a monthly column called The Pet Corner. I live with my husband of forty-seven years, and we love to travel, especially out West. We have two grown children and share our home with a fuzzy Pomeranian named Foo Foo, Ace the Tenacious Terrier, and two cats, Zombie and Sandwich.