Jayne York joins me today with an interview, and a look at her debut novel with The Wild Rose Press, IF WISHES WERE HORSES. Fun fact about Jayne: she spent 45 years as professional jeweler and she loves handcrafted jewelry. Tell us about your life and your book, Jayne! 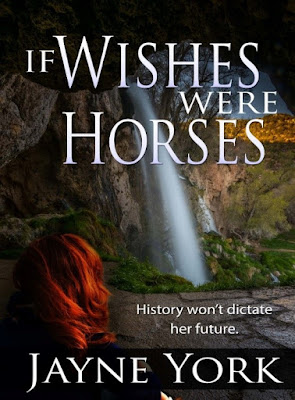 Over the years I’ve had the pleasure to witness some amazing stories of survival and triumph over childhood abuse. This is a story of just that. Most of us think that heroism comes with a flag attached and with some kind of fanfare, but I find it’s more important to acknowledge the extraordinary courage it takes to take a crumpled life and shake the wrinkles into the light.

What do you want readers to come away with after they read your book?

Bravery comes in all different forms. Some get medals for it and God bless them for their service. Some simply get to draw their first breath of fear-free air. They are equally courageous.

The theme or general message is what grabs me most often. Telling a story and revealing the truth of it are my driving force. The plot and characters serve the theme and I try really hard to keep all three balls in the air until the final catch at the climax.

In the case of “If Wishes Were Horses” the theme was first. But the plot and the characters drove each other. I’m not certain that will be the case every time but for this book it was true.

God, I’d love to be a meticulous plotter but that’s not the way my mind works. I probably fall into the 60% pantser/40% plotter ratio. I think the three-act format is a miracle on a plate.

I’m from the Rocky Mountains near the setting for “If Wishes Were Horses” but am currently living in upstate NY in the Adirondacks.

I’ve always written, but never had the courage to finish a book until five years ago when I began the journey with this book. It’s been one of the most satisfying trips of whole life.

Distraction! I’d love nothing better than to have the time and quiet to write full time. Unfortunately, I love to eat so I’m still working even in retirement.

I love them both (cats and dogs) and have been blessed to have some of the best you can imagine. At the moment I have a sweet and opinionated gray and white tuxedo kitty named George. She is my lap warmer and quiet companion on cold writing days.

If money were not an object, where would you most like to live? Why?

No question, I’d split my time between the mountains and Key West. I love the change of seasons but I’d rather it happened on my timeline.

Michael’s not perfect and he knows it. His personality is primarily protective and self-assured being a SEAL but after being forced into retirement, his self-confidence is rocked. I think he handles himself pretty well considering he’s never been in love with anything but the Navy.

Emily has the feisty public personality that people are often attracted to, but inside she’s still the wounded child. She finds the backbone to confront her past and embrace the possibility of living a guilt free life. It’s frightening but she does it.

How do you choose the names and physical characteristics of your characters?

They just float to the surface organically.

Do you base them on real people?

Always, they are an amalgam of the people I’ve met and those who have inspired me.

The WIP, “Midnight Acquisition”, is a heist story and a love story that revolve around a rare and misidentified gemstone. I spent forty-five years as a custom jewelry designer and manufacturing jeweler so there is a wealth of fantastical stories to draw from. I just finished the first draft, so I’ve got a lot of work to do.

For “If Wishes Were Horses”, the tag is “History won’t dictate her future.”  It’s the crux of the story.

I’m on several blogs including this one. http://www.wildwomenauthorsx2.blogspot.com

Thanks for having me. It’s been a pleasure to talk with you.

It's been a pleasure to have you on my blog, Jayne. Best of luck with IF WISHES WERE HORSES.


Emily Converse never expected to return to Tamarack, Colorado. But she's determined to rescue her drug-addicted brother and start a new life. Standing in her way, she finds her stepfather, a powerful US senator, looming over her future like the ever-present monster he'd been during their childhood.

Meeting wounded retired Navy SEAL, Michael McCandlis, is a steamy surprise in her homecoming, though he's adrift in civilian life. Together can they find a way to transform from victims to survivors?

Once upon a time, she'd run away from Tamarack like her heels were on fire, and now here she was volunteering to step back into the furnace. What was the definition of insanity? Doing the same things over and over, expecting a different outcome. Like if she managed to change, be stronger, be smarter, things would turn out better—different.

It wouldn't be that simple.

She downshifted the Jeep to slow for the last of the S-shaped turns on the narrow ribbon of asphalt. The road led her past the pretentious granite columns that marked her stepfather's compound. She wasn't consciously holding her breath, but a trickle of fear dribbled down her spine just the same. Her molars ground together in determination. The past wouldn't decide her present, not ever again.

In spite of herself, images of her last day on his estate flashed through her mind like the herky-jerky frames of a child's flip deck animation. Fear sharpened every visual, clarified every word, enhanced every touch. She'd run down the steps, racing for her car. He'd charged after her, smelling of alcohol and fury when he tried to stop her headlong rush toward an unknown future. They'd screamed out their mutual hatred, all the bitter dregs of their time together. She smirked when she remembered getting in the lucky shove that had landed him in a heap on the ground. It had been her first glimpse that Senator Ray Domenico was not the invincible, all-powerful monster she'd known him to be. 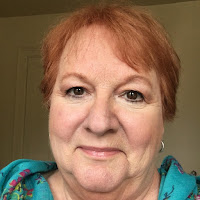 I've been an avid reader and sometime writer all of my life. I've never been able to resist the draw of a good story, and that has been true in my professional life as well. I was raised as the third of three children in the Colorado high country. Early on I discovered the joy of creating handcrafted jewelry, which led to a forty-five-year career as a professional jeweler. Every customer, every piece has its own story. I've collected them like pearls in a strand, and I often use them as a jumping-off point for the tales I tell. If you're looking for me, you'll find me on the shores of a northern lake, hammering away on my latest story of love and life in the modern world.
~*~ Find Jayne online at: http://www.JayneYork.com