First kiss scene from WHEN LOVE WHISPERS by Laura Haley-McNeil

Author Laura Haley-McNeil visits with a first kiss scene from WHEN LOVE WHISPERS, book 2 of her Beaumont Brides Series. I hope you enjoy this sweet, emotional scene: 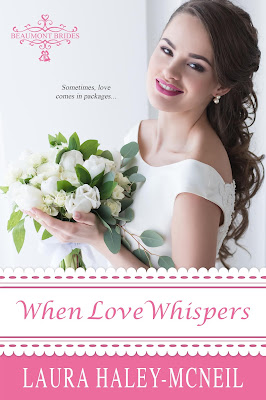 She turned her sweet face to his. In her eyes was a softness that bordered on melancholy. A lock of hair fell across her cheek.

Without thinking, he slipped a finger beneath the lock and draped it behind her shoulder. His hand rested on her delicate frame, her warmth sending a flood of emotions through him.

She stilled, her lips parting. A soft gasp escaped.

“Oh, Willow,” he murmured, and the desire that ached inside him gushed forward.

He pushed his hand through hair soft as silk and cupped the back of her head. She didn’t pull away. She let him guide her face to his. The taste of her lips was sweet and lush. She melted against him, her firm, round stomach pressed into his. The urges deep inside him burst in confusing sensations he wouldn’t take time to understand. For one heady moment, her mouth softened, her hand clinging to his shirt. His mind darkened, pushing out all rational thought. He couldn’t explain his feelings. What gripped his chest crushed reasoning.

His eyes flew open. He released her. She stood before him, trembling, her lips swollen and red. A sheen filled her eyes. He stared at her stunned. What had he done?

“Don’t say it.” Holding up her hand, she closed her eyes and shook her head. “Maybe we should rethink—”

“If that’s what you want, then we will.” His words were rushed. “But I’ll set some ground rules right now and promise you this will never happen again.”

Something flickered in her eyes.

As the top ranked student at Charleston’s military academy, Preston Lowe excels in class, in sports and with women. Only Willow Dockery, a barmaid at the city’s trendy nightclub, sees the pain in his eyes when he’s out with friends having a good time. But Willow doesn’t know how Preston inwardly struggles to forget a past that could derail the career he’s worked hard to achieve.

Willow wrestles with her own secrets. After a disastrous relationship leaves her broke and disillusioned, she vows never to let anyone rob her of her dreams again. But as she gets to know Preston, it’s as if their tumultuous pasts meld together into something so startling it transforms their relationship and their lives forever. Laura Haley-McNeil is an award-winning author of romantic suspense and women’s fiction in novel length and in short stories. Her work has been featured in several women’s magazines. She has studied piano and ballet and has been a board member for two community orchestras. She and her husband reside in Colorado. When she isn’t writing, she jogs, bicycles and crochets.