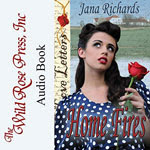 Today I begin a blog tour for the audio version of HOME FIRES with Audio Book Worm. HOME FIRES is set just after the end of World War Two and tells the story of an English war bride. Anne's road to love is anything but smooth:


The first stop on the tour today is at Lone Tree Reviews with a spotlight and giveaway. See you there!
Posted by Jana Richards at 6:00 AM