A Look at GLIMPSE, The Beautiful Deaths by Stephen B. King

Today I'm featuring Stephen B. King's book GLIMPSE, The Beautiful Deaths from The Wild Rose Press. Steve tells us a little about the story and the characters and shares an excerpt. Check out this amazing thriller! 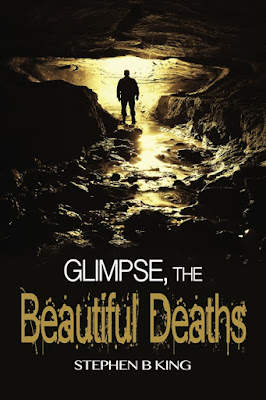 “When is a Serial Killer not a murderer?” asks criminal psychologist Patricia Holmes of the detectives she is preparing a profile for, in Book 2 of The Deadly Glimpses Trilogy, Glimpse, The Beautiful Deaths.

Detective Sargent Rick McCoy wanted her brought back to the Major Crime Squad after her recovery from the stabbing attack by the maniacal killer PPP, in Book 1 to help them understand a find in a series of caves in the South of Western Australia. The bodies of six young girls have been discovered, fully clothes, with garlands of flowers, each left there approximately a year apart. Strangely, there appears to be no visible cause of death; it’s as if the girls just faded away.

When another teenager goes missing, the pressure is on for a quick result, but Pat is not convinced it’s the same person responsible. She believes they are hunting a man whose upbringing and current life is so ugly, he is addicted to beauty. Further, she thinks he wanted to collect the young women after becoming obsessed with their looks, and they only died when they ceased to be what they were when he took them – beautiful. Hence her assertion that while he is a serial killer, he hasn’t actually killed anyone, and even if they catch him, there is no guarantee that they can charge him with murder.

But both Rick’s and Pats marriages are in trouble, because everyone can see the attraction, and desire they have for each other. Hell, blind Freddy could see that. Even PPP knew it, and he hates Rick and Pat and used their obvious desire to poison the mind of Rick’s wife, Juliet. So, while Rick needs Pat to help find the man who has caused the Beautiful Deaths, he doesn’t need the drama from Juliet because he is staying in a motel with Pat in the room next door. The real problem is, Rick had an affair once before, and though Juliet forgave him, she never forgot, and trust is an issue even if he was a saint.

Meanwhile Pat’s husband, Tom, has forbidden her to work with the police in general, and Rick in particular again after she was almost killed. But that’s not going to stop Pat from following her dream, and working with the man who thrills, respects and wants her more than Tom ever did.

Together, Rick and Pat must not only fight to control their desires, but face problems from their partners, and find a serial killer, who may not be a killer at all.

In this book, like all stories in the Glimpse series, the reader is given, in alternate chapters, a glimpse through the killer’s point of view into his life. Just why and how he became what and who he is. Pat says by way of explanation to the detectives working on the task force: “we are all products of our upbringing.” Gordon, as she nicknames him, is all that and more.

Though they don’t know it, Rick and Pat have a far bigger problem looming. PPP, the master of long term planning and strategy, is plotting his escape. When he succeeds, he is intent on making their lives a fate worse than death.

Rick McCoy of the Major Crime Squad is trying to repair his marriage when he is sent to the South of Western Australia. A young girl's body has been found in a cave, with flowers on her chest. A search finds five more bodies.

Beautiful criminal psychologist, Patricia Holmes, has recovered from her stab wounds inflicted by the serial killer PPP, and is brought in. Pat believes they are hunting a man who is addicted to beauty. When another school girl goes missing, they have only days before she too will die.

As their desire for each other grows and the pressure on their marriages increase, they close in on the man responsible for the beautiful deaths. Meanwhile, in the high-security wing of the mental health hospital, PPP plans his revenge on Rick

Excerpt from Glimpse, The Beautiful Deaths:

“Right, listen up everyone,” DCI Colin Harris began, as officers stopped talking or working at their desks. He with Rick and Pat stood before the whiteboard back in the incident room. “Some of you were with us on the PPP case and are familiar with the work the extraordinarily talented Patricia Holmes did for us. It is true to say without her help in capturing him; God knows how many more people he would have killed. She has graciously agreed to help us again and has been down to the caves with Rick and Tyler. I want you to pay close attention to what she tells us, as she has completed a preliminary profile of our killer which is nothing short of remarkable. We are very lucky to have an expert of her caliber working with us. Pat, please take over.”

“Thank you, Sir, and thank you all for having me back as part of the team. Sooner or later you will be interviewing this man, and for the purpose of drawing a picture of him for you, I’m going to call him Gordon. To me that name sums up how I’d like you to think of him, does that make sense? Gordon; that’s a nice common name that hopefully conjures up an image of a decent, caring, ordinary bloke. Rick, Tyler and the DCI are familiar with all this, and I’m not sure how much they’ve passed on to you, so for those who have heard this before I apologize. I started my profile with Rick and Tyler by asking a question, which is relevant to the kind person I believe we are hunting. That question is: When is a serial killer not a serial killer?”

She paused to look around at the police officers, and Rick smiled to note the look of consternation on a lot of the faces. “The answer is when the killer doesn’t actually kill the victims. His actions caused them to die, but that wasn’t his intent. I gave the others an estimation that I could be up to twenty percent wrong, but I think it’s now closer to ten, fifteen tops. What I do, is interpret the facts and things I see with some understanding of the psychology behind it, but it’s not an exact science. Please understand that.

“In the case of Gordon, when these girls died he was sad, terribly upset. Strictly speaking, while he knew he was breaking the law when he drugged and took them, he didn’t see it as illegal, if that also makes sense. In his mind, he saw a thing of beauty, or such sheer captivating loveliness, he had to own it. He is a collector of beautiful things, but soon after their abduction, the girls woke up, and suddenly they were no longer stunningly beautiful things, they were angry, sweaty, dirty, and smelly, and Gordon, well, he realized they had changed into something horrible. Like a butterfly turning back into a chrysalis. So, he no longer liked looking at them and talking to them, they were dirty ungrateful ugly things, so he visited them less and less because each time he did see them they were worse. Eventually, they died through his neglect, and he was hurt by that. But what hurt him most was not his actions, but her change from being a person of such beauty, to an ugly dead corpse.

“Now, to you or me, Gordon is a murderer, right? Of course, he is, but to him he isn’t. I think he is a rather a sad, pathetic creature who is addicted to beauty and who wants to collect as much of it as he can. He does this because his home is most likely not lovely any more, not on a personal level. Do not mistake his submissive nature for homosexuality, he is not gay, but his whole life he has been the meek one. Firstly, to his mother, or father, and then to his wife who probably dominates him to the point of stifling him.

“When you visit his house you will find his personal space, which will not be the main area, his wife will dictate what goes where there, but he will have a study, locked bedroom, or shed that is quite pretty. There you will find his collections. They all represent beauty to him. I’m thinking here of things like a collection of first day release postage stamps, perhaps those framed South American exotic butterflies, porcelain china or dolls. The house may or may not be perfect, because he doesn’t live alone, and he lives how he is told to live, but within that possibly untidy house he will have a room which in its own way will be quite extraordinary. You will know it when you see it.

“He is married, unhappily, though once he wasn’t, or at least he believed marrying would make him happy. In the early days, he was glad to get away from his mother, even though he idolized her. It’s possible; his mother forced him into it. She may for example, have told him he wouldn’t be able to do any better. Either way his wife is by far the more dominant; he is meek and mild mannered; she is strong willed and makes him conform to her lifestyle. Again, this strengthens his desire to own beautiful things, because his day to day life is far from that.”