TRUTH AND SOLACE #free at Amazon!

I'm excited to let you know TRUTH AND SOLACE, book three in the Love at Solace Lake series, is FREE from August 22 to 26, 2018. Yay! Maggie and Luke's story is the conclusion to the series. I hope you enjoy it. And remember, it's #free at Kindle Unlimited. Download it today! 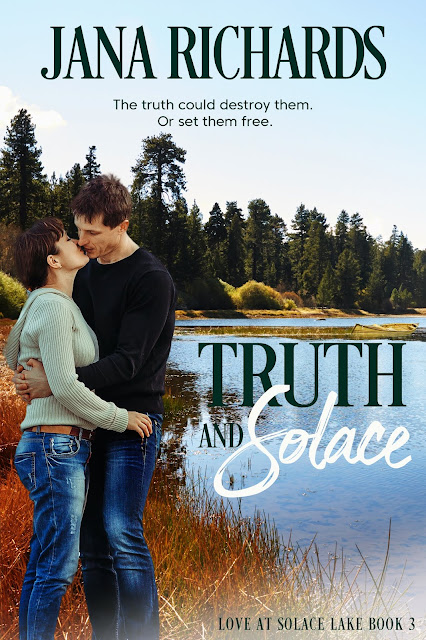 Series Blurb:
Love is worth the risk…

When their grandfather dies, the Lindquist sisters, Harper, Scarlet and Maggie, inherit the northern Minnesota fishing lodge that had been in their family for three generations. The inheritance is bittersweet. They were raised at the lodge by their grandparents. The natural beauty of the place hasn’t changed, but the building itself is crumbling and desperately in need of repair. The lodge also reminds them of what they lost. Twenty-two years previously, their parents died there in what was ruled a murder/suicide.

As the sisters struggle to breathe new life into the failing lodge, old fears and questions rise to the surface even as new love presents itself. Why did their father murder their mother? What truths did their grandparents keep from them? The sisters must fight to keep the wounds of the past from putting their futures, and their fledgling relationships, in jeopardy.

Blurb, Truth and Solace:
The truth could destroy them. Or set them free.

Maggie Lindquist left Solace Lake determined never to return. Circumstances have pulled her back and she’s helping to restore her family’s dilapidated fishing lodge. When she agreed to the plan she didn’t expect to have to work side by side with the man who abandoned her ten years earlier. She didn’t expect to like him, or want him ever again. But can she trust him as she once did?

Luke Carlsson rushes home to tend to his ailing mother. Her lengthy illness means he needs to stay, at least temporarily. And to stay, he needs to work. Solace Lake Lodge offers him a job and an opportunity to work with the woman he’s never stopped loving. But the restoration is unleashing secrets hidden for decades and no one is left unscathed. Especially not Maggie and Luke, whose love needs to be resilient enough to forgive, and strong enough to build a future together.

A memory flashed through her mind. Luke driving an ancient, mostly rusty Ford pickup to the lodge that summer. He’d worked odd jobs summers and after school for three years to buy it and keep it running. The old Ford had been his pride and joy.

Every chance they got, they’d sneak off in the Ford and park somewhere secluded. They’d been in that truck the first time Luke had kissed her. He’d pulled her toward him and covered her mouth with his, and she’d sworn she’d heard angels singing. And then, her body had gone up in flames in a very unangel-like way. As the summer went on, they’d grown bolder in their explorations. Harper had given her ‘the lecture’ on sex, but she hadn’t prepared her for the way her body would react to Luke’s kisses, or his touch. Like the way her nipples would harden as he caressed her breasts, and the way her panties would dampen. And when he’d reached inside her panties and inserted a finger inside her—

Maggie stared at Luke in incomprehension. And then the present returned with forceful fury. Heat infused her cold cheeks. They were on their way to see his sick mother. Her thoughts shamed her.

She reminded herself that Luke had left her once and would do so again.
Posted by Jana Richards at 12:30 AM