#Contest - Meredith Bond and the Story Behind the Stories

Meredith Bond wants you to know the story behind the stories of her Merry Men Quartet. And she also wants you to know about her Facebook contest which runs from August 20 -29, with the winners announced on August 29. She's giving away one ebook copy of each of the books in the Merry Men Quartet: An Exotic Heir, A Rake's Reward, A Dandy in Disguise, and The Merry Marquis. Here's the link to the contest: https://www.facebook.com/meredithbondauthor/posts/10157703097629546 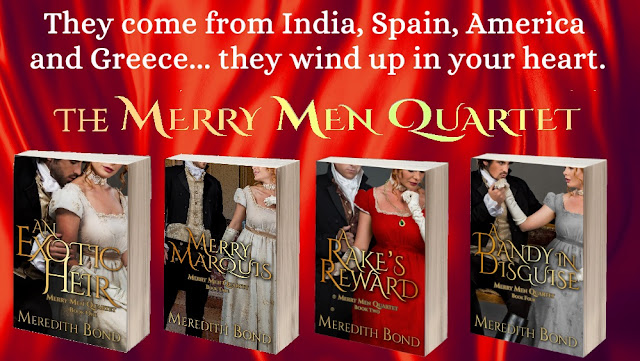 The Story Behind the Stories

Where do stories come from? It’s usually a very small spark. Someone says something. You see a book, a movie, a picture. Before you realize it a story is forming in your head—a “what-if”.

It happened to me a while ago when I mentioned my name to someone who was also a writer of Regency romances. I told her my name was Merry. She said, off-handedly, that I should have a character called the Merry Marquis.

I thought it was a great idea!

Being the perverse person that I am, I immediately decided that my Merry Marquis should be a very sad man. Why, though?

Of course, he’s mourning the loss of his wife. But this is a romance, so he has to fall in love once again. With whom?

Well, if my Merry Marquis is called Merry, he had to have been known as a very merry person, therefore his heroine in the book needs the help of someone who is merry and outgoing. Again my irony came to the rescue—he needs a heroine who is shy. For some reason, my mind came up with a girl, Teresa, who is half-English, half-Spanish, who is shy because she’s been plucked from the only home she’s ever known (in Madrid) and sent to a strange country (England).

I’m proud to say that The Merry Marquis has won a few awards since it was first published by Kensington Publishers (under the title Miss Seton’s Sonata).

Characters grow as a writer discovers more and more of their histories, and from the characters, grows the story. But that isn’t all there is to a story. There has to be secondary characters.

My merry hero, if he’s such a popular guy, needs friends. Close friends.

My husband loves comedic characters, someone who is over the top and therefore funny. He created St. John Fotheringay-Phipps, known to all as Fungy.

In British English, St. John is pronounced Sinjin. Fotheringay is pronounced Fungy. So just his name, to an American ear is funny (and odd) and will almost always be mispronounced. (When I first published A Dandy in Disguise, Fungy’s book, a number of people complained that his name sounded like a mushroom. Indeed, it does, and I even have other characters laugh and comment on this in the book. It’s meant to be humorous. Some people didn’t appreciate that, sadly.)

Fungy is a typical Regency dandy, only more so. His fashion is over the top, but so is his kindness. Because of this he absolutely cannot stand idly by while Rose Grace, completely naïve to the ways of society after having been raised on an archaeological site in Greece, is tricked by an unscrupulous gentleman. Fungy is there to save her just when he is needed.

To contrast Fungy’s outrageousness, I created Sin. Sinclair Stratton, Viscount Reath. He is everything Fungy is not. Staid. Conservative. Serious (although he does have a sense of humor—he is friends with Fungy, after all). So naturally, Sin comes across his match (in A Rake’s Reward) when trying to get from Portsmouth to an estate he won at cards when he was just a teenager. The American Sara Whately doesn’t care for lords and doesn’t care a bit about their conceit, and she tells Reath so in no uncertain terms. You know that they just need to be together.

Rounding out the group (and what oddly enough turned into the first book of the series) is Julian Ritchie, Earl of Huntley. Julian was born of my love of Kolkata, India (or Calcutta, as it was known in his time). My husband is from that fascinating city and so I have first hand knowledge of it’s beauty and quirks. Time doesn’t seem to pass in the same way in Kolkata as it does in the rest of the world. People cling to the old ways—fruit and vegetables are still sold by people sitting on the ground, their stock arranged beautifully on banana leaves and in woven baskets before them in the bazaar; traffic lights are still (mostly) pretty colored decorations to be ignored as you drive through the city streets (traffic police are listened to, however, and they still stand at all major intersections making sure traffic flows smoothly); and the houses of even the middle class still team with people cooking, cleaning and even driving for their employers (I shouldn’t mention the sometimes horrid conditions these people return to each night where if you own a tv or a refrigerator you are lucky).

It was easy, then, for me to imagine Calcutta of the 18th century when Julian was born to an Indian mother and an English earl (you can read their story in Under the Mango Tree). I am happy to say that what Julian experienced as an Anglo-Indian isn’t common anymore—the snubs and outright discrimination. But as a proud man and hero of a romance novel, he wasn’t just going to take it, he wanted revenge. What he didn’t plan on was sweet, innocent, open-hearted Cassandra Renwick who had already been hurt once by a man. You’ll find their story in An Exotic Heir.

Thus the Merry Men were born: the story of four men who were close friends, each with his own tale of romance.

Meredith Bond's books straddle that beautiful line between historical romance and fantasy. An award-winning author, she writes fun traditional Regency romances, medieval Arthurian romances, and Regency romances with a touch of magic. Known for her characters “who slip readily into one’s heart,” Meredith loves to take her readers on a journey they won't soon forget.  She is currently living in Europe enjoying the Bohemian life.

Merry loves connecting with readers. Be sure to find her: