Debut author Cat Dubie is my guest today. Her first novel with The Wild Rose Press, THE QUEEN OF PARADISE VALLEY, releases tomorrow and she's very excited to share it with readers. Please welcome Cat Dubie! 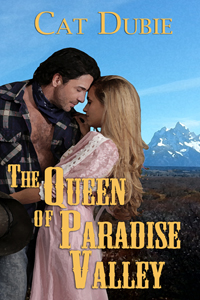 Thanks, Jana for giving me this opportunity!

Tomorrow, November 1, is the release day for my first romance with The Wild Rose Press – an historical Western The Queen of Paradise Valley.

Diana Rennie, daughter of a wealthy rancher, attempts to persuade mystery man Del Russell to leave his grievances behind and forgive her father for past mistakes. Her careful plan goes awry and results in a shotgun wedding and a prison sentence for Del.

Four years later, Del is back in her life with a vengeance—back for his rightful share of Diana's ranch, back to prove he isn't the criminal she thought he was, back to finish what the two of them started years ago in a passionate daze. And he isn’t going anywhere, no matter what beautiful, treacherous Diana does or says to try to get rid of him.

A lantern hung from the center post, shedding smoky light that didn’t reach the gloomy corners of the tent. Diana brushed snarls out of her hair and pulled down the wool sleeves of her  underwear. Outside a rising wind stirred the pines, sawing branches together, scattering needles onto the canvas roof.

She shivered and hugged her arms. Her bedding, blankets arranged on a thin mattress, looked cold and uninviting. Why hadn't she asked one of the cowhands to bring some heated rocks from the campfire? Where was her brain? Still listening to Del as he chided her for skimming the surface of the ocean he called life?

A chilly draft swept her back. She whirled. As if she had conjured him up, Del stood in shadows at the entrance, one hand holding his hat, the other clasping the neck of a bottle.

"Del--" Tremors in her voice betrayed her excited dread. "You have no right to be here."

Her dread increased as he let his hat fall and stepped forward, his face emerging in the light. There was something predatory in his half-closed eyes. Something hungry.

"Why?" The soft-spoken word seemed fraught with danger. His gaze moved over her in a slow sweep and he swayed, groping for the center post to steady himself. The lantern swung and grotesque shadows careened across the canvas walls. He raised the bottle to his lips.

She shook her head. Drunk. Disgusting.

"See, the men got a wager. Some say you wear black to bed. Reckon they’re wrong. Man's clothes, man's red underwear. An' I was hoping to see the flawless design."

No sense to his words. No reason for heat forming in her cheeks, spreading to her neck and down.
She said, "You can make your report and leave me to myself."

My love of words began early--I'm told I was making rhymes soon after I began to talk. With a crayon in my hand I first drew stories, with a pencil I wrote them. As for reading, I was the girl who always had her nose in a book, the one who read with a flashlight under the covers or, when the moon was full, would sit by a window for hours laughing, crying, loving characters whose adventurous lives wouldn't let her sleep.

The girl grew up, married one of the good guys, raised three great children, worked, laughed, lived, and never lost her need for creating stories about romance, adventure, passion, mystery, love...
We now live in southwestern British Columbia where I'm able to indulge that need full time, plot, plan, and now share my stories with readers.