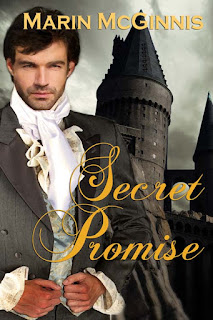 Historical writer Marin McGinnis is with me today to talk about her writing process and her latest release. Welcome Marin!

The hero in Secret Promise is the long lost brother of the heroine in my first book, Stirring Up the Viscount, so I knew well before I sat down it that he would be the central character and that he would come back to England after seven years abroad. I didn’t know exactly what had happened to him until I started to do some research into the American Civil War.

I write historical romance because not only do I love to read it, I love to do the research which is required to make the story credible. I love losing myself in what was in many ways a simpler time, before cell phones and copy machines, airplanes and cars, when correspondence took more than 20 seconds to get to someone, and manners were everything.

What was the most difficult thing about writing this book?

The most difficult thing about writing this book was the middle, but then that’s true for every book I write. No matter how sure I am that the story is supposed to go a certain way, I manage to veer of course somewhere around 30,000 words, and it takes a supreme effort to get back on track.

I love to read paranormal romance, and young adult paranormal. I would love to write something like that, but I haven’t been struck with the right idea yet. Maybe one day!

Nope. I first started dabbling in my 20s, but really didn’t start writing in earnest until my 40s.

I do! I have three books going at the moment. I do try to stick with one at least through the middle, but when I get stuck, it’s nice to have something else to work on.

Just one. It was the first one I ever wrote. I still love the idea of it, so may rewrite it one day, but in its current incarnation it will forever stay under the bed.

I write in all kinds of places. I am, oddly, most productive in hockey rinks, while my son is practicing.

I live in an eastern suburb of Cleveland, Ohio. I’ve been writing in earnest for 7-8 years.

I am a lawyer in real life. It doesn’t help me one bit, except perhaps as far as funding my writing goes!

The day job, absolutely. But that’s unlikely to happen until I retire.

I’m allergic to cats, so although I love them, I am a dog person. I’ve got two dogs—a standard poodle named Larry, and a part-Standard poodle, part-something-else named Sneaky Pete.

My current WIP is a little different, set in England in 1851, in which an heiress advertises for a husband to save her estate.

Falsely imprisoned as a blockade-runner during the American Civil War, Edward Mason yearns to go home. But when after seven years he finally returns to England, the life he expected is gone. His parents are dead, his home destroyed, his father’s legacy stolen, and his girl—his girl is now the single mother of a child Edward never knew.

Abandoned by the man she loved and disowned by her family, Anna Templeton has learned to stand on her own two feet and make a home for her son. Now the successful owner of The Silver Gull tavern, she's not about to put their happiness in the hands of the one man who let her down so badly.

Edward is determined to regain Anna’s love and be a father to his son. But when a series of suspicious accidents threaten him and those he loves, he must stop the man responsible, or lose everything.

“Good day, sir. What can I get you? We have a very good cottage pie today.”

Edward frowned. “Aren’t you a bit young to be working in a public house?”

“The barmaid, of course.” His tone held a hint of derision, as if he thought Edward an idiot for failing to know who Molly was.

“Of course.” Edward was amused. “Well, then, I suppose I shall have the cottage pie, and an ale. And perhaps I could have a word with your mother, when she has a moment?”

“What do you want her for?” The boy’s eyes narrowed suspiciously.

“I used to live here, many years ago, and would like to speak to someone about…” Edward broke off as a woman emerged from the kitchen, carrying two plates piled with food. She had fiery red hair and a lithe figure, and moved easily through the tables. After setting one of the plates before a man sitting near the bar, she turned and scanned the room. Her gaze alit on the boy first, and she smiled. Then she spotted Edward. All color drained from her face, and the remaining plate slid from her hand, shattering on the stone floor.

“Mam!” The boy raced to the woman and clutched at her skirts, but Edward was unable to move.

Clevelanders are tough, a bit cynical, and just a little crazy, and Marin McGinnis is no exception. When she's not chasing after big dogs or watching tweens skate around hockey rinks, she is immersing herself in romantic tales of years gone by. She lives in a suburb of Cleveland, Ohio, with her husband, son, and two standard poodles.

You can find her hanging out at marinmcginnis.com, on her group blog at throughheartshapedglasses.com, on Twitter @MarinMcGinnis, Facebook at facebook.com/MarinMcG, Goodreads at https://www.goodreads.com/author/show/12256384.Marin_McGinnis, or Pinterest at https://www.pinterest.com/marinmcginnis/
Posted by Jana Richards at 12:30 AM