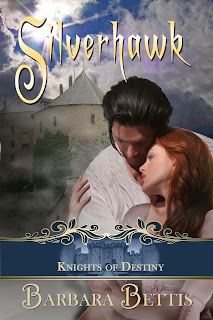 Historical author Barbara Bettis is with me today to talk about one of her favorite secondary characters. Thanks for joining me!

Authors love their heroes and heroines. We also love our secondary characters. Often, we love them so much, they get their own books.

Sometimes, though, those favorite characters will always be secondary—but they’ll appear in several books. One of those favorites for me is Davy. In my first book, SILVERHAWK, which has just been re-released by Amazon, Davy is peasant youth of about 14 who works as a stable lad for the elderly lord that Emelin, the heroine, is to wed.

Davy is mouthy as befits a youth that age, but he’s quick and he’s smart—and he’s wily. When he meets Sir Giles, the renowned Silverhawk, Davy finds an object for hero worship and sets out to follow when Giles kidnaps Emelin. In fact, he’s the only one observant enough to spot their hidden trail and shrewd enough to eventually track them down.

The character of Davy started out as a comic relief in a serious scene near the beginning. He just slipped into the action as someone cute that readers could identify with. But somehow the boy kept nudging into scene after scene, until I’d become very fond of him and hated to see him go when the story left that location.

Imagine my surprise when Davy popped up days later. Well, of course his being in the midst of the action had to serve a story purpose, so he became the means of revealing Giles’ identity and of informing Giles and Emelin of approaching trouble.

And, of course, he later lends a cunning hand to help Giles defeat the villain.

I’d grown so attached to Davy, that in the next book, THE HEART OF THE PHOENIX, he insisted on becoming a trusted squire (it was possible for that to happen in the late 1100s) and an important messenger for both the hero and the heroine.

He’s not the only secondary character I’ve grown attached to, and in my world, all the characters I love get happy endings. Davy will have his. I have no doubt we’ll see that in one book soon.

Thanks for sharing Davy’s story with me. Do you have a secondary character you like from a story you’ve read or written?

Here’s an excerpt from SILVERHAWK featuring Davy and Sir Giles not long after they meet.

In the stables, Nuit was in his former stall at the back, munching hay. The few lads tending other mounts ignored Giles. Except for one familiar, dirty face which popped out of a corner. Davy.

“Is it true you kill ever’one when a town don’t surrender?” Awe tinged the boy’s voice. “Even women and children?”

The remark was met by a snort. “I didn’t touch your devil ’orse, Silverhawk. It was m’brother.”

The boy hopped back at the menacing whisper, wide-eyed, as if he’d stepped on a forest adder. “That’s what they been callin’ you. It’s your name, aren’t it? The famous Silverhawk, who can spot a’ enemy a mile away and bring ’im down in one swoop. Nobody escapes.” Davy demonstrated with a swing of his fist, as if he relished the idea.

“I am.” The boy strutted. “That’s what Lord Osbert always says. I can stand the sight a’ lots a’ blood. When Sir Karl slashed ’is arm and bled all over everywhere, I ’elped old Maggie wrap it. And I’m not afeard a’ nothin’.”

He crept closer as he told the tale, ending at Giles’ side. “You don’t have a page or a squire or nobody.” His voice notched up a note in excitement. “I could be your squire. The blood wouldn’t scare me at all.”

Giles considered for a moment, then couldn’t resist. “I could use someone to clean my bloody gear,” he allowed. “As my squire, your first duty is to care for my horses.”

Davy peered at Giles; the boy’s eyes rounded like moons. “You mean—’im, too?” He jerked his head at Nuit, who obligingly “thonked” a hoof on the floor and blew saliva-wet hay from his lips.

“Of course. The two of you will learn to get along. It’s my destrier back in Normandy I’m concerned about. He once took a finger off a page who tried to feed him an apple.”

Even in the dimness, Giles could see the boy pale. Unfortunately the story was true, although it was just the tip of the left forefinger. A rough lesson, but at least the boy learned not to tease a war horse. “If you don’t like horses, why do you work here?”

Davy screwed up his mouth and wrinkled his nose. “English ’orses are nicer. I’m not afeard a’ them.”

“Then you’d best apply to an English knight.”

“Nobody around here does anythin’. They’re not famous. I’m goin’ to be famous when I’m grown. I could learn from you.”

Sir Giles has come to England to kill his father, who seduced and betrayed his mother. First, however, he’ll seek sweet revenge—kidnap the old lord’s new betrothed. But when Giles uncovers a plot against King Richard, he faces a dilemma: take the lady or track the traitors. What’s a good mercenary to do? Both, of course.

Lady Emelin has had enough. Abandoned in a convent by her brother, she finally has a chance for home and family. Yet now she’s been abducted. Her kidnapper may be the image of her dream knight, but she won’t allow him to spoil this betrothal. Her only solution: escape

Rescuing the intrepid lady—while hunting traitors—is a challenge Giles couldn’t anticipate. But the greatest challenge to Giles and Emelin is the fire blazing between them. For he’s everything a proper lady should never want, and she’s everything a bastard mercenary can never have.

A former health insurance claims adjuster, a former journalist, a former journalism teacher, Barbara Bettis plans never to be a “former” author. Currently, Barb supports her writing habit as an adjunct English instructor at a community college near her home in Missouri.

Don't forget! Barbara is offering a $5 Amazon Gift Certificate to someone who shares one of their favorite secondary characters. Comment here to enter!