Marin McGinnis and SHAKING UP THE VISCOUNT 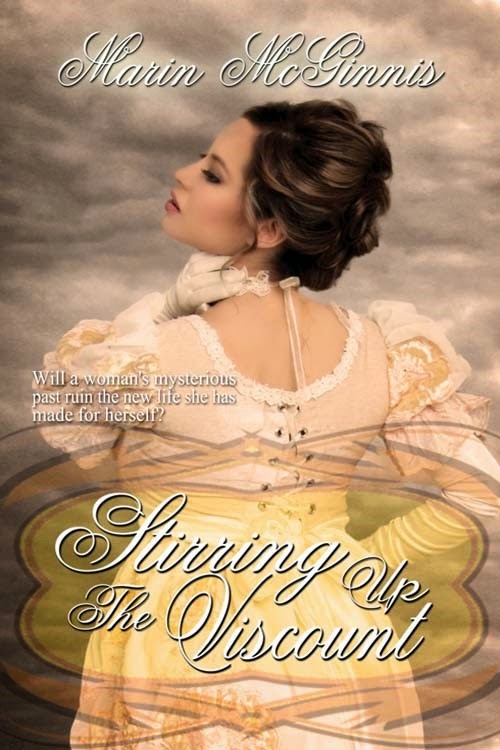 Stirring Up the Viscount
releasing from The Wild Rose Press on January 30, 2015

Seeking to escape an abusive husband, Theodora Ravensdale answers an ad in The Times for a job as cook in a country home. A fortuitous house fire enables her to fake her own death and flee to northern England and live under an assumed name. But Theodora’s refuge is not all she would wish, when she stirs emotions in the heir to the estate, Jonathan Tenwick, and in herself.

Meanwhile, as the connection between Theodora and Jonathan grows, her husband learns she did not perish in the fire, and searches for her. Fearing he is close to finding her, Theodora must flee again to protect the family and the viscount for whom she cares deeply. In the final confrontation with her husband, Theodora learns she is stronger than she ever knew, and love is worth fighting for.

She watched, mesmerized, as the grease flared and flames began to lick the seasoned wood of the counter.

She blinked, as much from the smoke beginning to sting her eyes as from the realization she didn’t have to swim in the Thames. She hurried to the hole in the wall where she had stashed the satchel. She removed it and replaced the brick. Her gaze darted around the room as the smoke grew thicker. She spotted the cookery book her mother had given her when she married, and on an impulse she grabbed it, clasping it to her chest as she began to cough.

Theodora rushed toward the door and grabbed a light wrap off a peg. She stowed the book in her satchel and adjusted the wrap around her shoulders. When she opened the door, the fire behind her roared with the added oxygen. She closed it quickly and inhaled great gulps of air.

Her eyes burned, her head ached, but she walked quickly around the house to the street. Fortunately Christopher Street was nearly deserted at this late hour. She stole a glance at the house behind her and saw smoke starting to curl around the windows. She spared Lucien a thought. It wouldn’t be long before someone noticed the smoke, and he wasn’t a particularly heavy sleeper. The chances were excellent he would wake in time to escape.

She shook her head to clear her thoughts. There was no time for regret, and certainly no room for compassion. Not for him.


As she rounded the corner onto Back Hill, she heard someone cry, “Fire!”

Clevelanders are tough, a bit cynical, and just a little crazy, and Marin McGinnis is no exception. She writes smart and sexy tales of Victorian-era romance.

When she's not chasing after big dogs or watching tween-aged children skate around Ohio hockey rinks, you can find her hanging out at marinmcginnis.com, on her group blog at throughheartshapedglasses.com, on Twitter @MarinMcGinnis, or Facebook at facebook.com/MarinMcG.
Posted by Jana Richards at 12:30 AM