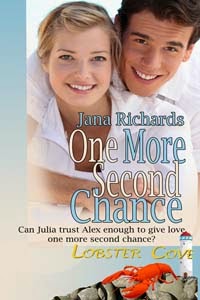 Tomorrow's the day ONE MORE SECOND CHANCE releases! Yay! I've been waiting a long time, and I'm thrilled this book is finally entering the world. Here's a blurb:

Dr. Alex Campbell has an agenda—finish his contract to provide medical services in Maine, pay off his medical school debt, and head back to his real life in San Diego. But when he meets Julia, all his carefully laid plans are put in jeopardy.

Julia Stewart, Lobster Cove’s high school principal, swears she’ll never let another man drag her away from the home she loves. Her aging parents need her, and the Cove is where she wants to raise her daughter. When her mother’s illness brings her and the big city doctor closer together, panic sets in. Her marriage taught her men don’t stay.

Can she put aside the heartaches of the past and trust Alex enough to accept the love he’s offering? Or will her fear of abandonment mean she’ll send him away forever?

“If it comes down to believing you or believing my mother, I’m going with my mother.”

“Perhaps you don’t know your mother as well as you think you do.”

Julia stared at the door. “She’ll be scared, all by herself.”

Julia turned on him, the anger and despair she’d been holding inside spilling out. “And you? Do you enjoy upsetting five-year-olds and turning families’ lives upside down? Does it make you feel powerful to sic the authorities on us?”

Tomorrow I'll be all over the Internet with a Bewitching Tours Book Blitz. Starting Monday, February 9 I'm beginning a two week excerpt tour with Goddess Fish Promotions. As well, I'm visiting with writer friends to celebrate my new release through the month of February. A complete schedule of stops is on my News and Appearances page here on the blog.

Would you like news of contests and my new releases? Join my newsletter! If you join today you have a chance to win a $10 Amazon card by entering a contest exclusively for my newsletter subscribers. Sign up here and you'll receive details about the contest in your inbox tomorrow. Thanks!

ONE MORE SECOND CHANCE can be purchased at the following retailers:

The Wild Rose Press ~ Amazon ~ iBooks ~ Kobo ~ Chapters/Indigo ~ Bookstrand ~ ARe
Posted by Jana Richards at 11:58 AM