Amber Cross joins me today to talk about her newest book, OPEN DOOR TO LOVE, which will be released May 17. This is book three in her Love in the Kingdom series which is set in Vermont's Northeast Kingdom area in the fictional town of Somerset. Amber is giving us a glimpse into her book's world with an interview of her characters, David and Jonnie. Welcome Amber! 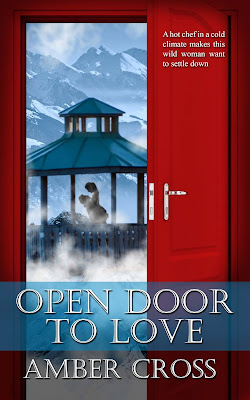 A Conversation with David and Jonnie from OPEN DOOR TO LOVE

Question: What did you want to be when you grew up? If that isn’t the path your career took, what do you do now?

Jonnie: A businesswoman. I became a cosmetologist, then a municipal marketing specialist.

David: A private investigator. I became a chef and restaurateur, now a resort owner.

Q: What do you want most out of life?

Jonnie: I want a big family. My mother sent me away when I was a teen and I didn’t grow up with my siblings.

David: I want a big family. My mother left me with my grandparents when I was young and I didn’t grow up with my siblings.

Jonnie: Nothing, really. I was involved with his friend and didn’t pay much attention to him.

David: What was my friend thinking when he hooked up with her? There was no he could handle that much color and energy.

Q: The two of you didn’t see one another for three years after that first meeting. What was your impression the next time you met?

Jonnie: The man is hot! Seriously, how did I miss that the first time?

David: Everything about her called to me, but she pretended we hadn’t met before. What was she up to?

Q: What do you like most about David? About Jonnie?

Jonnie: He is calm. Frustratingly unflappable, really, but exactly what I need.

David: She is dynamic, wide open, emotionally, and exactly what I need.

Q: What is your greatest fear about getting involved with David? With Jonnie?

Jonnie: That he will discover my past and turn away from me.

David: That she won’t trust me with her heart.

Thank you for speaking with me. I can't wait to read your story!

Jonnie Moulton's chance for a fresh start as Somerset's marketing consultant might be over before it begins unless she can convince David Wang she knows what she's doing and isn't the desperate woman he met three years ago. This confident new Jonnie makes David's blood sizzle. He plans to keep her close and not just because she's living in one of his resort cabins. He "gets" her like no one else. She excites him more every day. But is this simply passion, or have they found an open door to love?

They couldn’t run in the morning. Much as he wanted to spend time with her, the temperature had risen so much over the last two days the trail wasn’t safe. A thick layer of mud covered still-frozen ground. One misplaced foot could result in an injury.

“Makes sense,” she said when he explained this at the gazebo, the disappointment in her tone gratifying.

“You can always use the gym.” He wanted her to. Wanted to know she worked out one floor below his bedroom.

“Hmm. Thank you. And I will,” she hurried to add, as if he might not believe her. “It’s just that I need an aerobic workout in the morning, and being outside gives me a rush nothing else can match.”

David looked out over the hill, at the lake shrouded in fog and the white steepled church in the distance. He didn’t trust himself to look at her because he wanted to give her a rush, and he was afraid she’d see that on his face. She might find him attractive, but she hadn’t given him a green light, and he didn’t want to scare her off.

“Maybe I’ll just take a walk around the common.”

Under control once more, he met her gaze. She would never be content with a gentle stroll or simply stretching her legs for a few minutes.

“How many times around?”

She grinned, and he couldn’t help smiling with her. 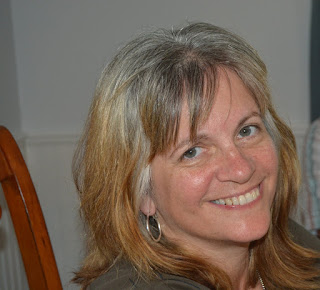 Amber Cross was raised on a family farm in New England, one of a dozen siblings, each one inspiring her writing in some way. She still lives in that same small town with her husband and the youngest of their five children. She loves spending time in the woods, in the water, and watching people because every one of them has a unique and fascinating story to tell.