This Thursday I have four books on my backlist to tell you about! The e-book versions of all 4 books are on sale for 50% off the regular price at Amazon. But hurry! Sale ends tomorrow, February 19. 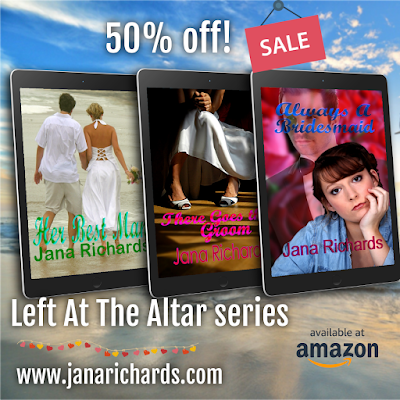 All three books in my Left at the Altar Series are 50% off!

Sarah Stevens experiences a bride's worst nightmare; being dumped at the altar. When she goes on the Caribbean cruise meant to be her honeymoon in order to lick her wounds, she discovers her ex-fiancé has sent his brother, Will Marshall, the former best man, on the cruise as well. Everyone on board thinks they're newlyweds, and Sarah is too embarrassed to set them straight. How is she supposed to share a tiny cabin with a man she barely knows? How is she supposed to pretend that she and Will are on their honeymoon? Even worse, how can she keep from falling in love with him? Sarah discovers the best man for her really is the best man.

There Goes the Groom

Eight years ago Tony left Olivia at the altar, sure she didn't really want to marry him. Now he's back, and they're forced to work together.

Coming home isn't easy for Tony. The choices he’s made with his career and his life have resulted in an uncomfortable relationship with his father. Even before Tony's return, Olivia began questioning the depth of her love for her fiancé, a man she chose because he was safe and reliable. The last thing she wants is a faithless marriage like the one her parents suffered through.

When Tony, who never stopped loving her, insists her fiancé is the wrong man for her, Olivia sets out to prove him wrong. But the sexual chemistry between them is still strong, and so are her feelings for him. Even so, how can she break her engagement, hurt her fiancé as she was once hurt? And how can she trust Tony not to abandon her like he did before?

If anyone does the jilting this time, she will.

And one more book! A LONG WAY FROM EDEN will also be 50% off until February 19. Get your e-copy now! 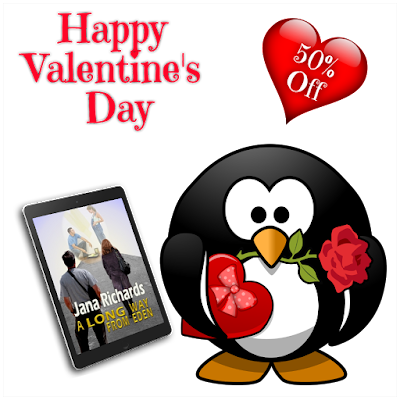 Zane Martin's teenage daughter is pregnant. Meg Evan's son is the baby's father. Because Zane grew up not knowing who his father was, he'll be damned if he'll let his grandchild live with that shame. Meg was forced into an abusive marriage because of an unplanned pregnancy, so she knows that love is the only good reason to marry. Neither Meg nor Zane expects or welcomes the attraction that sparks between them. As they await the impending birth of their grandchild, old wounds open and long hidden family secrets come to light. The young couple builds a newer, stronger relationship, while Meg and Zane reach for a love passionate enough to overcome the past--if they're strong enough to trust it...and each other.

Email ThisBlogThis!Share to TwitterShare to FacebookShare to Pinterest
Labels: #BacklistThursday, #booksale, 50% off, A Long Way From Eden, Always a Bridesmaid, Her Best Man, Left at the altar series, There Goes the Groom, Uncial Press