Today I'm starting a new feature on my blog where I feature books from my backlist, or occasionally other writers' backlists. First up is BURNING LOVE, my fun paranormal romance. I call it paranormal light because rather than shifters, demons and vampires, I've got angels who want to match mortals with their soulmates. BURNING LOVE came out in 2010 and was my first novella/novel with The Wild Rose Press. 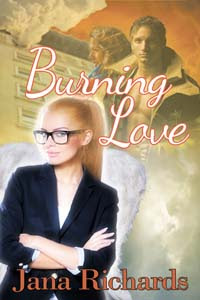 Blurb:
After causing three cooking fires in her apartment, Iris Jensen finds herself evicted and homeless. She lands on Riley Benson's doorstep, looking to rent a room in the beautiful old home he's restoring. It's only for six weeks until Iris leaves Portland, Oregon for her new job on a cruise ship. Firefighter Riley knows firsthand what a bad tenant she can be. But he needs money to finish the work on the house he loves. And something about Iris pulls at his heart…
Meanwhile, in Heaven, two angels watch over the young lovers. Angelica and Hildegard work in Heaven's Relationship Division, where angels match mortals with their soul mates. The angels believe so strongly in Iris and Riley’s love that they break Heaven's rules to help them. Can the angels convince them their love will last a lifetime?
Excerpt:
“Renting the room to you is starting to look like one of the smartest things I’ve done lately,” he said with a smile.

Without thinking she set the boxes on the fridge and took his hand. “I’m serious, Riley. I don’t mind telling you how scared I was. Whiskers and I came very close to sleeping on a bench in the park with the other vagrants. So, thank you.”

Riley gently brushed his fingers across her cheek, sending a rush of desire coursing through her body. “You’re welcome. But I know you would have been okay, even if I hadn’t rented you the room. You’re a strong girl.”

Iris didn’t feel very strong at the moment. In fact, she felt as weak as a kitten, and just as vulnerable. She let go of Riley’s hand and gave a shaky laugh.

“Yeah, that’s me. Strong as a marshmallow.” She picked up the boxes of food and turned away, afraid to look him in the eye and make a fool of herself.

“Hey, what’s this?” Riley asked. Iris turned to see him staring at her calendar.

“That’s just a little visual reminder for me. Only five more weeks until I hit the sunshine and you get rid of me.”

Instead of laughing the way she thought he would, Riley continued to stare at the calendar.

She wanted to ask him if he was okay, but something in his voice stopped her. Surely, he wouldn’t miss her?