I love the old saying "Men make plans and God laughs". In D.V. Stone's upcoming release, ROCK HOUSE GRILL, Aden and Shay's plans come crashing down around them, but together they learn there's always Plan B, and it can be better than they ever imagined. ROCK HOUSE GRILL releases April 6, 2020 from The Wild Rose Press. Welcome D.V.! 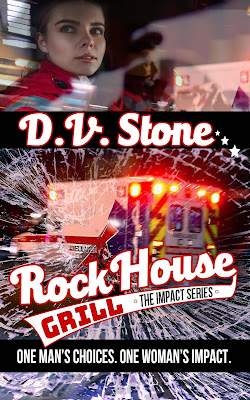 Have you ever had everything planned out for your life? You were going to go to school and get a degree in a field you loved, but no one was hiring in that field. Maybe find the partner of your dreams and live happily ever after, until the divorce. You were going to raise your kids to be amazing people, but they didn’t turn out how you expected. The bank account you were building for retirement ended up going toward medical bills.

Don’t get depressed yet. I’m an author whose main ARC or Trope, is hope. A bit of personal history. I’ve owned and lost businesses. Heath issues are real. I’ve been divorced. Laid off from long term jobs. Money? Fuhgeddaboudit! (I can use that expression, I’m from NJ.)

So, when I was asked about my favorite scene in Rock House Grill, this one immediately came to mind. Here’s the setup. Circumstances in Aden House's life are a contributing factor leading to a terrible car accident. He is in a rehabilitation center with damaged legs. In the midst of an anger/pity party, a very smart man comes into his room who may or not be loosely based on someone I know.

“Do you need anything?” John, the rehab aide, popped his head in the door. “Can you get your legs on the bed?”

The man flinched at his sharpness. Aden took a deep breath. “Sorry, thank you.”

“I know it’s frustrating.” John came in, picked up the grabber, and leaned against the wall. “It might help to talk to someone.”

“I’ve already talked.” Aden grabbed one leg, then the other, lifting them onto the bed. “See, it’s all good.”

The other man didn’t back off, though. “So, you’ve talked to someone. What did they say?”

Aden leaned back, put his arms behind the pillow, and stared at the ceiling tiles. “I would experience anger, frustration, insecurity—blah, blah, blah.”

“And what were you experiencing when I heard you throwing things and stuck my head in?”

Aden closed his eyes. “All of it.”

When he opened his eyes, John stood at his bedside. “You’re still the man you were. It’s a rough patch. You’ve hit rough patches before?”

“Welcome to the other ninety percent of humanity.” The aide stooped down, so he and Aden were on eye level. Laugh lines and slight graying at the temples were the only indications he was older than Aden. “Circumstances change us. We can curse them and let them control us. Or, we allow whatever happens to make us better.”

“No, I don’t think you do.” John paused a moment, grabbed a chair, and straddled it. “I have this friend. He’s a runner.”

Aden pulled himself up, leaned against the headboard, and snorted. “I’m getting a bedtime story?”

“Yeah.” John laughed. “The guy wants to be in the Olympics. Every day he runs and practices. Every day he gets home, and he hurts all over, especially his feet. Blisters like I’ve never seen. They bleed. But after a while, blisters go away, bleeding stops, and calluses develop.”

“You’re saying I should develop calluses?”

“Wait, calluses are not the point of the story. The guy makes the team. Heads to Atlanta.”

“Did he win?” Aden couldn’t help being caught up in the story. “Have I heard of him?”

“He got sick.” John leaned his arms on the back of the chair. “Pneumonia, the day the meets started.”

“Then all his work was for nothing.” Well, that wasn’t helpful. Shouldn’t this be a story about a winner? “Just like me.”

The other man shook his head. “I didn’t say The End.”

“He went to the hospital and nearly died. But there was this nurse.” John’s eyes went distant. “She was beautiful and determined her patient would make it.”

“Yup. They fell in love, got married, and had a couple of kids.” John pushed the chair back and stood up. “Not the life he’d planned. He regretted not achieving what he’d worked so hard for, but once he adjusted, his life turned out great.”

Aden developed a sneaking suspicion in his gut as the aide headed for the door. “What does this guy do now?”

“He gets great satisfaction in helping injured people get on with their lives.” John closed the door behind him.

Aden House, successful but driven chef and TV personality, refuses to slow down. His life implodes one night, damaging him both physically and emotionally. He's rescued by a woman he thinks of as his angel.

Shay McDowell has rebuilt her life after her divorce. She juggles volunteer EMT duties and her job, while dreaming of becoming a chef. She finds her way to Rock House Grill and back into the life of the man she helped save.

Can love be the ingredient needed to survive the many obstacles they face?

“Easy, you’re going to be okay.” A soft voice eased through the chaos around him. The owner of the voice grabbed his arms and held them in a firm but gentle grip. “I’m right here with you. You are not alone.”

“You’ve been in an accident. I’m an EMT with the ambulance squad,” the velvety voice calmly explained. “You can’t see well because we’re under a tarp. Hold still, okay?”

A small light flickered at the edge of his vision. It shone into a bag next to him. Penlight.

“You’re restrained to a board. It’s to keep your head from moving and causing more injury.”

She continued to talk to him. The voice reached down somewhere inside him, calming and peaceful, so he focused on it. A glow from spotlights on the outside lit whatever covered them. The shadow gave the woman the appearance of a halo—like an angel.

Born in Brooklyn, D.V. Stone has moved around a bit and even lived for a time on a dairy farm in Minnesota before moving back east. Throughout her wandering, she always considered herself a Jersey Girl. She met and married the love of her life, Pete—a lifelong Jersey Man, and moved this time to Sussex County.  They adopted Hali, a mixed breed from the local shelter, who is still working things out with their cat Baby.

D.V.’s career path varied from working with the disabled to become a volunteer EMT, which in turn led to working in hospital emergency rooms and then in a women's state prison. After a few years, she took a break from medicine and became the owner of Heavenly Brew, a specialty coffee shop in Sparta NJ, and a small restaurant in Lafayette. Life handed some setbacks, and she ended up back in the medical field, but this time in a veterinary emergency hospital.

During the poor economy, she was laid–off from a long-time position she cared about. Devastated, D.V. wondered what to do with her life. Finding comfort in her love of reading, she realized it was now time to follow her dream of writing. It's been a long road but worth every minute of it. Now a published author, she also works in a people medical office again.