Amber Daulton makes a return visit to Journeys with Jana with an interview of her hero Dylan Haynes from LYRICAL EMBRACE. This novella is part of the Deerbourne Inn series from The Wild Rose Press. Enjoy! 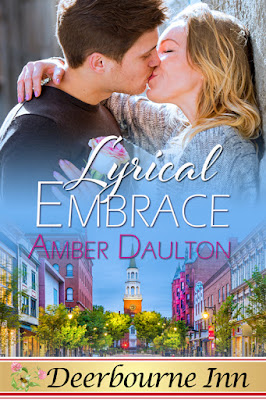 Where are you from?

There’s only one place I call home, and that’s Willow Springs, Vermont. I’ve lived there all my life, except for the five years I spent in New York City drumming for an indie rock band, Fortune’s Glory. Only about three thousand people live and work in Willow Springs, but tourists come from all over the world in the winter to ski and snowboard in the Green Mountain National Forest. During the summer, the Fourth of July festival draws in a big crowd. Even though I love New York, it doesn’t compare to my hometown.

Tell us about your story, Lyrical Embrace.

It’s about making mistakes, learning from them, and moving on with your life.

You see, I lost myself to the partying lifestyle after I joined Fortune’s Glory a few years ago. I eventually wised up, quit the band, and moved back home.

I grew up around music, so it’s a big part of my life, but I didn’t realize what I truly needed until I met Erica. Her car had broken down in the middle of a rainstorm, and I stopped to help her out. I could tell right away she would be nothing but trouble for me, but hell, I couldn’t just leave her out there in the cold. Turns out, she was a big fan of my band. We connected over music and hard times, but trouble was brewing, and I didn’t realize it until everything almost crashed down around me.

What did you think the first time you saw Erica.

She was soaking wet and bending over the engine of her car, so I didn’t see how pretty she was at first. I only saw a woman in need of help, so that’s all I cared about.

What was your second thought?

I really wanted to get out of the damn rain. Erica was just standing there, asking me questions, and half-accusing me of being a psycho killer ready to stuff her in the trunk of my car. The rain was pouring in thick, white sheets, and I was doing my best to keep calm and not freak her out even more than she already was.

What impression do you usually make when you first meet someone?

I like to think of myself as a normal guy, and I hope I portray that to the people I meet. Fortune’s Glory never made it big back in the day, so I’m usually not recognizable to anyone outside the New York music scene. I’m grateful for that.

What is your profession?

I’m an ex-professional drummer, and now I’m an instructor at Haynes Music Academy, my parents’ music school. I play a multitude of instruments, but I usually just teach kids how to rock the drums.
I’m also a volunteer fireman. After so many years of partying and acting wild, I wanted to do something good and give back to the community where I’d come from. Being a fireman and a certified EMT helped me accomplish that goal.

What is your greatest fear?

I’d say it’s the same fear everyone has. Losing the person you love. Erica has been through a tough time, and I love her like crazy. Even though she covered her tracks damn well after she escaped her violent ex-boyfriend, the man still found her and threatened to kill her. Hell, he nearly killed me. God, I don’t even like thinking about any of that. If I lost Erica, I don’t know what I’d do.

*Dylan snorts* What do I not like? Erica is perfect for me. She’s strong, beautiful, and stubborn, but vulnerable too. She’s an excellent violinist and loves music just as much as I do. She went through hell with her last boyfriend, but she’s still kind and willing to put her heart on the line. Her strength and her desire to never give up is definitely a turn-on, and I’m damn glad she picked me. I couldn’t be prouder of her.

How would Erica describe you?

That’s a whammy of a question. Back when I was still drumming for Fortune’s Glory, Erica attended the concerts at the clubs and crushed hard on me, but I didn’t even know she existed. I just never saw her in the crowd of screaming, dancing fans and skimpily dressed groupies. I was nothing but an arrogant, sexist prick back then, and Erica knew it. After I stopped drinking and left the band, I headed back home to straighten out my life. Then Erica and I finally met. It was like kismet. I’m not proud of the way I acted before, but I’ve since proved to Erica I’m a sober, one-woman man.
Today, I think she would describe me as levelheaded and giving. That’s the man I want to be. Hopefully, I’ve succeeded.

What is the best piece of advice you ever received?

My older brother, Birley, once told me I can’t change the past and that I have to move on from my mistakes. He’s right. The past is just that—the past. The man I am today is the one I choose to be. The life I want is the one I strive for everyday. And I gotta say, I’m pretty happy with the way things turned out.

Out-of-work violinist Erica Timberly decides enough is enough. She leaves her abusive boyfriend and flees the big city, but then her car breaks down in the middle of the night. Though wary of men, she accepts help from Dylan Haynes, a stranger driving by on the road, and soon recognizes him as the sexy former drummer of her favorite indie rock band. Maybe, just maybe, her run of bad luck is finally turning around.

Music teacher Dylan Haynes knows Erica is in trouble, and her black eye is only the first clue. The stubborn yet vulnerable woman needs a friend, but he’s determined to give her everything she deserves.

Will Erica listen to the music in her heart and trust Dylan, or will her past always threaten her future?

Erica checked her watch. “It’s almost nine o’clock. What do you want to do now?”

“I have something in mind, but I’d like to surprise you.”

“Ooooh, interesting.” She braced her elbows on the table, weaving her fingers together, and braced her chin on her linked hands. “The movie theater in Montpelier?”

“Nah, it’s too late to go there tonight. The back-to-back movie marathons will have already started by now.”

“You’ve piqued my interest. C’mon, let’s go.” Erica handled the check, to Dylan’s irritation—she asked him to dinner, after all—but he took care of the tip.

After they left the tavern, Dylan pulled her close and circled his strong arms around her waist. Heat radiated from his body as he kissed her in the parking lot.

The shock of his lips on hers stilled Erica’s heart, but then the organ jump-started like an engine. Erica kissed back, desperate to taste him, and she savored the hint of spice on his tongue. She moaned and gripped the soft fabric of his shirt, almost ready to tear his clothes off. 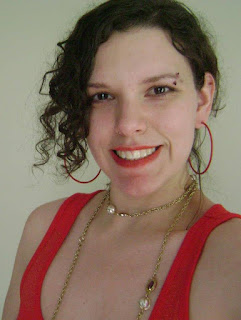 Amber Daulton is the author of the romantic-suspense series Arresting Onyx and several standalone novellas. Her books are published through The Wild Rose Press and Books to Go Now, and are available in ebook, print on demand, audio, and foreign language formats.

Amber lives in North Carolina with her husband and four demanding cats. Feel free to visit her at http://www.amberdaultonauthor.blogspot.com.