Misty Simon is my guest today with her latest contemporary romance LIV AND BREATHE, published by The Wild Rose Press. I'm happy to offer a sneak peak. Welcome, Misty! 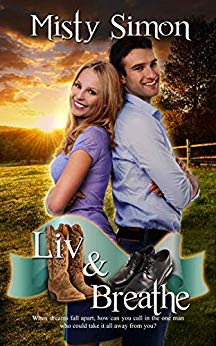 Olivia Jameson runs a summer camp called Breathe, giving inner-city kids a chance to see a different life. When the man who owned the camp died, leaving his dream to his son, Liv took charge, and the work means the world to her.

As far as Alex Campbell is concerned, the camp is a hands-off tax write-off. But when Liv calls because her boys are accused of property damage, Alex returns to the place he hasn't called home since age twelve…and to a girl he barely remembers, now a woman who stirs him like no city sophisticates ever have.

This is Liv's livelihood, her mission, her dream. Sharing it with a man who doesn't understand the impact is frustrating. But as he begins learning truths that were hidden from him, both Liv and Alex may have a change of heart. Can Liv open up her life one more time to love?

The clink and clatter of silverware in the busy diner did nothing to block out the thoughts churning through Olivia Jameson’s head. She had made the call earlier this morning, and now she would have to live with the consequences. Hoping she’d survive the experience, she had her doubts it would be easy.

“What can I get you, hon?” Betty, the owner of Petri’s Dish, asked with pad and pencil in hand.

“Just coffee.” At the thought of the storm she may have created, Liv’s shoulders drooped.

Betty’s eyes narrowed behind her thick glasses. “Tell me what’s wrong. You never just order coffee, especially when I have my pineapple salsa pancakes on the Specials board.” Her hand went to her hip, while her expression became mutinous. “So you’re not still worrying about that little ruckus over at the Beckham farm, are you? I told you it would all blow over.”

Unfortunately, it wasn’t blowing over. In fact, it had just gotten a whole lot bigger. “They’re pressing charges.” It was as simple and as complicated as that.

“What?” Bustling around the counter, Betty plopped down on the stool next to Liv. A crowd began to gather the second she did. She never sat down for anything, not even when she wasn’t working. “You better tell me what in the world is going on, right now.”

No matter what she said or did at this point, Liv knew the entire story was going to come out soon enough. Such was life in a community their size. Sometimes she wished she lived in Kissinger, the next town over, where everyone seemed to mind their own business.

She might as well take a chance and tell her side before Mr. High and Mighty came rolling into town—if he could unglue himself from his society life long enough to take any interest.

“Some boys in town say they saw my boys over in Beckham’s pastures trying to tip over cows. When these town kids came along, they said they spooked the camp boys, who took off running. According to the accusers, that’s how the fence was broken and how the alpacas got out and ran away. Beckham still hasn’t found two of them.”

By this time, there was a solid crowd of about twenty people hemming Liv and Betty in at the counter. As much as Liv appreciated the looks of outrage for her camp boys, and for the situation in general, she didn’t blame the Beckhams for pressing charges. Especially with the graffiti Mr. Beckham had told her was spray-painted on the side of his barn.

She just couldn’t wrap her head around the idea that her boys would do something so destructive when they knew the consequences and the punishment for not toeing the line.

“I don’t believe it,” Betty declared, and had the majority of the other people agreeing with her both verbally and by nodding their heads. “There’s no way the boys at Breathe would jeopardize their time here by doing something so stupid.”

Liv would have said the same thing to her boss, Alex Campbell, this morning if he’d picked up his phone. Instead she’d left him a message asking him to please come to the farm, and she’d explain when he got here. It would be far better to handle this face to face. That way she could plead the case for her boys and make him understand more easily than she could convey over email. She didn’t want him here, but she wasn’t able to figure out a way to avoid it.

“I agree,” Liv said to the diner at large, but worry still pulled her eyebrows together. “The problem is how do I prove it? I don’t want to accuse anyone else, and I can’t prove without a shadow of a doubt that the boys were all in their beds last night. Not even David. This is a huge mess, just in time for the annual cook-off.”

“Don’t you worry about the cook-off,” Tim from the mechanic’s shop said. “That’s all taken care of, except for a few details. We’ll figure something out with the boys, too. I’m coming there today to work on that car with them. I’ll ask some questions that maybe you can’t ask.”

There was a chorus of agreement while people all went their separate ways. She really appreciated the support, but who was going to be there when Mr. Campbell came riding in to shut down the camp because she wasn’t doing a good job as the director? She couldn’t—and wouldn’t—lose Breathe, a camp that had been around for almost eighty years. It housed underprivileged boys from major cities over the summer, giving them a chance to see real grass and real cows, to ride horses and learn skills and self-worth that would hopefully keep them out of gangs and make them productive members of society. 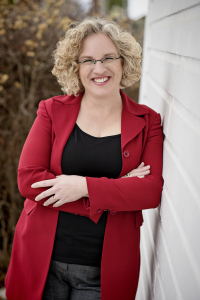 Misty Simon always wanted to be a storyteller…preferably behind a Muppet. Animal was number one, followed closely by Sherlock Hemlock… Since that dream didn’t come true, she began writing stories to share her world with readers, one laugh at a time. She knows how to hula, was classically trained to sing opera, co-wrote her high school Alma Mater, and can’t touch raw wood. Never hand her a Dixie cup with that wooden spoon/paddle thing. It’s not pretty.


Touching people’s hearts and funny bones are two of her favorite things, and she hopes everyone at least snickers in the right places when reading her books. She lives with her husband, daughter, and two insane dogs in Central Pennsylvania where she is hard at work on her next novel or three. She loves to hear from readers so drop her a line at misty@mistysimon.com.