My friend Karyn Good writes really great romantic suspense, and book one in her Aspen Lake series is on sale for .99 cents until April 5, 2019. Check it out! 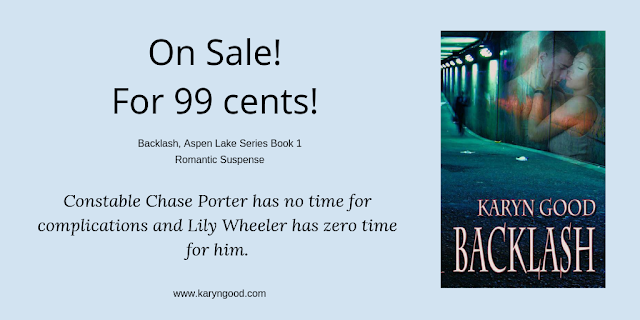 What he's sworn to protect, she's willing to sacrifice to save those she loves...

When dedicated teacher Lily Wheeler interrupts a vicious gang attack on one of her students, she vows it won't happen again. But her rash interference puts her in the path of a cold-blooded killer and the constable tracking him-a man she has little reason to trust, but can never forget.

Constable Chase Porter returned to Aspen Lake to see justice done, not renew old acquaintances. But when he rescues the woman he once loved from a volatile situation, he realizes his feelings for Lily haven't lessened over the years.

Now, the dangerous killer Chase has sworn to capture has Lily in his sights. Can Chase and Lilly learn to trust each other again before it's too late-or will old insecurities jeopardize their future? 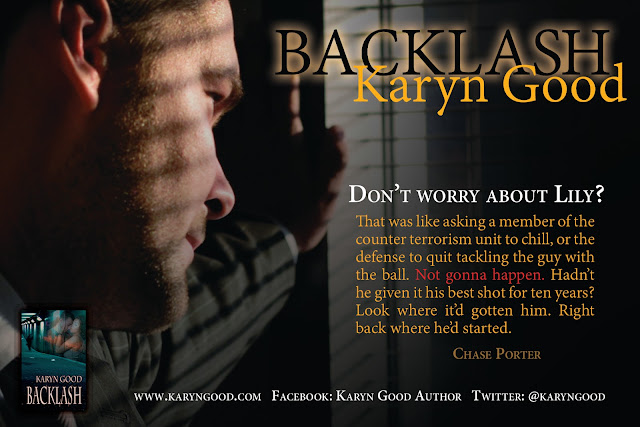 Chase rubbed at the grinding ache settling in at the base of his skull. Gang violence showing up in the tranquility capital of the world proved what law enforcement knew for a fact: gang activity was escalating in both rural and urban districts. The infestation extended across the country. Controlling it was like trying to shovel a hill of shit with a teaspoon. Raphael Tessier seldom left the cover of his hill. His appearance in Aspen Lake was an anomaly. Chase needed to know what had necessitated the out of character move. And what a scrawny teenage boy had to do with any of it? Or his teacher?

He paused in the open doorway and studied the five feet, six inches of complication seated at the battered metal table. His jaw clenched as Lily tucked a strawberry blond curl behind her ear. After a span of ten years the girl-next-door look she had going on still had the power to muddle with his brain. Instead of focusing on the bad guys every taste bud he owned was salivating; each fingertip was coveting a touch.

It was bloody demoralizing.

Fantasizing didn’t have any place in his game plan. He needed to strategize. He had zero time for small town, freckle-faced schoolteachers who smelled like blue sky, wheat fields, and the toughest decision he’d ever made. He cleared his throat and pushed away from the doorframe. Time to put his money where his mouth was.

She flinched at the sound. He gestured to a chair across from her, waited for her nod of permission. And because he’d morphed into a pathetic loser, he noted the slow slide of her tongue over her bottom lip, the skittish eye movements, along with the infinitesimal head bob. He tossed the file he’d been holding onto the table between them. The slap of sound calmed his nerves as he settled into the chair.

“Can I get you anything?” Coffee, tea, protective bubble wrap.

She lifted up the disposable cup in front of her. “No, thank you.”

"Okay. Then what can you tell me about the confrontation in the parking lot?"

"Shouldn't we wait for one of the officers before getting into that?"

"I don't understand." Her fingers tightened around her cup, and the resulting pop from the pressure filled the small space. She glanced back at the door, all confusion, and he knew she was hoping for some kind of intervention. For someone else to join them, anyone else. "What do you have to do with all this? Why are you back here?"

Stalling, he settled his arms on the tabletop. She didn't trust him. He also got she was the last person she'd want dropping back into her life. The file between them held some of her answers. There rest were buried so deep inside him, it made ignoring them all part of the routine.

He offered her an anemic look of confusion. “Here?”

“Yes. Here. In this room. In Aspen Lake. In the parking lot of my school.” She spread her hands out and motioned around her. “Here!” She averted her gaze and inhaled a deep breath before spotlighting him, apprehension darkening her eyes, deepening the blue color.

“I’ve been transferred to the Aspen Lake detachment.”

“You’re a cop?” Her look of skepticism said it all. The air of disbelief pricked at his ego and he shifted in his chair. Like all the times in fifth grade when his teacher, Miss Carlisle, had asked him why he had no lunch. Had asked questions about his father.

“Is that so hard to believe?” He had worked his ass off to get where he was, and he was a damned good cop. The work he did with the Combined Forces Special Enforcement Unit, and his reputation, proved his dedication to his job. None of which she’d be aware of, or care about if she did. When he burnt a bridge, the only thing he left behind was ash.

Posted by Jana Richards at 7:59 PM