FIRST AND TEN by Margo Bond Collins and Erin Hayes

Margo Bond Collins and Erin Hayes are with me today to talk about their new release FIRST AND TEN. Sounds like a hoot! Please welcome Margo and Erin!

First and Ten: A Contemporary Reverse Harem
A Team of Her Own Book 1: Preseason 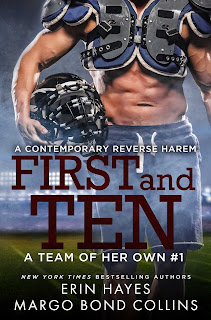 When Madison Harte inherits a football team with three hot players who all want her, there’s one problem: when it comes to America’s favorite sport, she’s clueless.

I have the worst luck. Failed tech startup? Check. Cheating ex-boyfriend? Check. No idea what to do next? Check.

Then my Uncle Dusty passes away and leaves a whole football team to me. Never mind that I’ve never even seen a game. Who has time for that, right?

But I can sell the team and turn my life around, so I fly from San Francisco to Birmingham, Alabama, where I find a whole new level of football obsession—and start to develop a fascination of my own. Mostly with the three players who are very, very interested in me.

I never expected to find a team of my own. Or that there would be so many obstacles in our way.


The last time I had anything to do with football, Timothy Bartley threw the ball at me during PE, and it hit me in the face. I was left with a shiner for three weeks after that, barely able to see out of my poor eye. Everyone made fun of me, and I still sported a small scar on my eyebrow where my skin had split from the swelling.

That was in sixth grade. Seventeen years ago.

Since then, I hadn’t watched a game, hadn’t paid attention to who’s who, or even glanced at ESPN. That was fine by me. I was happy not having to spend my Saturdays watching the big game. My money was spent on video games, comics, and shoes instead of tickets and merchandise.

Football was in an entirely different universe that didn’t touch mine in the slightest.

“Excuse me?” I asked in disbelief, sitting forward in my chair. My black business suit stretched as much as it possibly could, but it still felt tighter than the last time I wore it. Yet another sign that my size-14 waist was now a size 16. I’d put on some weight since my ex Jacob and I broke up six months ago. My boobs looked great though, so I really didn’t mind. He was the one missing out.

“Did you just say what I thought you did?” I asked.

My lawyer, an old family friend named Daniel Reiss, a balding man with a permanent scowl, stopped his reading of my late uncle’s will and looked up. “Which part?”

He must have continued reading while my mind slowly processed what had been bequeathed to me.

“The part about the football.”

He frowned, the wrinkles in his face deepening, and he flipped back a few pages in my uncle’s very long will.

Uncle Dusty had been eccentric when he was alive, amassing a huge fortune that had once covered a vacation home in Tahiti, several of the most expensive cars ever produced, a private jet, and millions of dollars in capital. But, being eccentric, he had spent or sold most of it before he died. Fair enough, I would have done the same. Most of the will consisted of what to do with his coin collection or each of his rare, exotic stamps.

But the part about football was, well, let’s just say unexpected.

Finding his place on the page, Daniel cleared his throat. “‘I leave my football team, the Birmingham Yellowhammers, to my brother’s daughter, Madison Harte.”

I blinked. “Is that like a little kid’s team or something? Or his collection of footballs? Or a set of those shirts they wear?”

“No.” He watched at me, perplexed. “They’re a team for the major league.”

I looked at him blankly.

“As in professional football, Ms. Harte.” Ugh. Daniel only used my last name when he thought I was being stupid. I should’ve been used to it by now—he’d used it for the last several months as I refused offer after offer from Jacob to buy out my half of our tech startup, even as my savings dwindled. I finally took him up on it when I had no choice.

Daniel couldn’t hide the derision from his face. No matter how grumpy someone looks, they can always make you feel like the stupidest person in the room.

I worried my bottom lip, a million thoughts running through my head. “Uhm, how can you leave someone a whole football team?”

None of this made any sense. 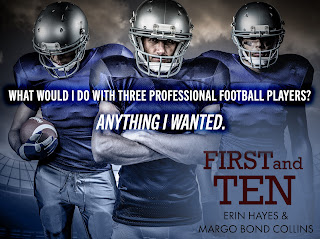 Margo's Top 5 Favorite Sports Movies One of the things I loved about co-writing First and Ten with Erin Hayes is that neither of knows anything about football! Lucky for us, though, neither does our heroine. We’re not quite as clueless as Madison, though I have to admit, much of our (small amount of!) combined knowledge of the game comes from popular culture, including movies. I was originally going to do a top 5 football movies post…but then I realized I couldn’t think of five football movies. Clearly, I’m going to have to fix that as this series continues! But for now, here are my top five favorite sports movies: 1. Bull Durham 2. Bend it Like Beckham 3. A League of Their Own 4. Rocky 5. Field of Dreams What I love about all these sports stories is that ultimately, they’re not about the sports—they’re about what it means to be human, to function as part of a team, to live and love and win and lose. Tell me: what are some of your favorite sports movies, and what do you love about them?


She works as an advertising copywriter by day, and she's an award-winning New York Times Bestselling Author by night. She has lived in New Zealand, Hawaii, Texas, Alabama, and now San Francisco with her husband, cat, and a growing collection of geek paraphernalia.
You can reach her at erinhayesbooks@gmail.com and she’ll be happy to chat. Especially if you want to debate Star Wars.