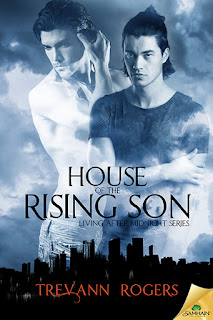 I often fall in love with so-called secondary characters. Not only do they add depth to the story, but also they offer a window into some element of the protagonist or his situation that the reader wouldn’t otherwise have access to. And sometimes, they steal the show. In my book, HOUSE OF THE RISING SON, one such character is Consuela who, by the way, would take great exception to being referred to as  “secondary”.

Consuela is Huldra, a Norwegian or Scandinavian forest dweller.  She presents as a beautiful woman, but if you see her naked from behind you learn she has a hollow back and a tail. Her people are very seductive, and the females use their wiles to seduce men into marrying them and giving them children. Or they may kidnap human children. Some sources reveal that Hulderfolk have a particular affinity for music.

Her rich heritage makes Consuela perfect for Cheyenne, the hero of the story.  He’s an incubus rocker who has two children. She helps him out by babysitting for him while he works. She’s at once their Mary Poppins and their guardian/protector. She’s Cheyenne’s truth-teller and his only true friend.

But that’s not all she is. Consuela is biologically Huldu—a male. She’s a drag queen (self-identified), with a sassy mouth and a fierce right hook.  She’ll kick your ass if you hurt Cheyenne’s kids. She steals every scene she’s in.

Readers seem to be drawn to Consuela. Perhaps some because she’s hilarious, (“I know a delivery boy who’ll come in 30 minutes or less.”), or because she loves the kids so deeply. I cherish Consuela for both of those reasons, and because of her devotion to Cheyenne in spite of Cheyenne’s secretive, mistrusting nature. She recognizes that he needs her and that they share two common bonds: Their love for his children, and the wish to be more than they are.

Cheyenne is a half-human incubus whose star is on the rise in the Unakite City rock scene. His father, the leader of the supernatural races, would prefer he keep a “low profile”, but screw that. Cheyenne has as much music in his veins as royal incubi blood.

Alexander's future is all set—finish law school, join the family firm, and marry someone who'd be good for business. Not that he has a say in any of it. He's barely met the woman his father expects him to marry.

As Cheyenne's musical career takes off, his carefully constructed life begins to unravel, exacerbated by an ex-lover who can't let go, a crotchety barkeeper with a dirty mind and a pure heart, a drag queen who moonlights as a nanny, and Alexander—who's not sure if he's falling for the incubus or the rocker.

Cheyenne denies who he is, while Alexander hides what he wants. Together, they learn that getting what they truly want means being who they truly are.

Warning: Contains hot were-tiger sex, a Thanksgiving celebration that makes the Inquisition look like a tea party, and an incubus who'll rock your world.
~~
Excerpt:

While waiting for their drinks, Alexander studied the deep grooves carved into the table, trying to ignore the friction of Cheyenne’s thigh rubbing against his as the musician tapped a heel to the thump of the DJ’s music. Once the drinks arrived, Alexander downed half the bottle before he realized Cheyenne’s large green eyes were staring at him.

Cheyenne’s eyes sparkled. “No, you got it right the first time. Where is she?”

Cheyenne cocked his head. “Oh, really?” He put his hand on Alexander’s leg. “What’s up? You can tell me.”

“It’s not working out.” Alexander dragged his teeth over his lower lip. “It’s my fault.” He couldn’t keep his attraction to Cheyenne out of his voice. “I don’t know what’s happening to me.”

Cheyenne put his thumb to his lip and paused. “It’s like the drink.”

Alexander tilted his head, not sure he heard correctly. “The drink?”

“Yeah, that nasty ass bourbon. I bet your father drinks it. Your uncles. All your friends. Everybody, right?”

He didn’t answer, but waited for Cheyenne to continue.

“It was just expected that you’d drink it too. So you did.” His hand moved up Alexander’s thigh. “But now, maybe it’s okay to drink what you like. A different brand, a better vintage. Because you want it. Because it tastes better.” Cheyenne licked his lips. “Because it feels right.”

Alexander cleared his throat and brushed his lap, pushing Cheyenne’s hand away. “I can’t.”

“If you change your mind, let me know.”

“You don’t understand. It’s not that easy. My whole life will change.”

“It already has.”
~~
You can find HOUSE OF THE RISING SON AT:
Samhain Publishing, Barnes and Noble and Amazon.

About Trevann
Trevann Rogers writes urban fantasy and LGBT paranormal romances. Her stories incorporate an unquenchable addiction to music and her love for vampires, Weres, incubi and rock stars. Like these elusive creatures, Trevann learned long ago that sometimes being yourself means Living After Midnight.