I'm very pleased to welcome Amazon Best-Selling author Elf Ahearn to my blog today. I asked Elf to answer a few interview questions, and though she only answered one, her heart-felt and personal answer tell me exactly why her book zoomed to number one! Her book is on sale for .99 cents until the end of September. I'm going over to Amazon right now to pick up my copy and I hope you'll do the same. Please welcome Elf Ahearn! 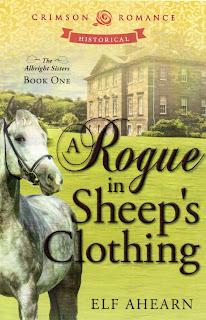 On September 13,  my historical novel, A Rogue in Sheep’s Clothing, dinged the bell at Amazon by hitting #1. It’s on sale until the end of September for a mere .99 cents, and if I do say so myself, it’s worth all 100 minus one pennies.

Instead of answering a slew of Jana’s questions about the book, I’m going to concentrate on the first one, and add it to other annotations on other blogs about the novel. So here goes: Where do you get your ideas?

The idea for A Rogue in Sheep’s Clothing came directly from my family. There are four sisters in the book, and there are four girls in my family. Lord Albright, the heroine’s father, is an Egyptologist; my father was an Egyptologist; the Albrights live on an estate called Fairland, and yes, I grew up on an estate called Fairland.

My Fairland was a nineteen-room house (not including bathrooms) on eighteen sweeping acres. Every room in that massive abode was packed with books. By the time he died, my father had amassed 27,000 volumes. He built a children’s library with a tiny reading balcony, a chapel room where he housed the works of the great philosophers, and a main library that sported a magnificent fireplace and a set of gold drapes acquired from Teddy Roosevelt’s office at the American Museum of Natural History. Fairland was an extraordinary place to live, and I am the luckiest person I’ve ever met.

Like all incredible places, however, there was something not quite credible about Fairland. The fact is, we couldn’t really afford to live there. When I say my father “built” the children’s library, I mean he really did build it. The only help he got was from my uncle, my mother, and me (I passed the nails).

In winter we heated only the back of the house by running a wood burning stove in the kitchen. There were so many dogs and cats piled around that stove you had to have a gymnast’s balance to load more logs. My parents, who slept in the master suite at the front, could see their breath when they went to bed. They snuggled under an electric blanket and kept a space heater going in the bathroom for quick dashes at night. Among other issues, the brass handle on the front door didn’t work, so we opened it by yanking on a rope, and we never wore anything but secondhand clothes. My father’s favorite jacket was a torn polyester parka he patched with duct tape.

Fairland was in an immensely wealthy part of Connecticut populated by the bastions of conservatism; William F. Buckley owned the house across the street, literally. But my parents were artists—dreamers who didn’t quite fit the Connecticut mold. There was something almost feral about us, and those were qualities that were often met with either curiosity or contempt. My sisters and I tried often and hard to fit in, but our hand-me-downs, our lack of funds, and a restless inability to conform always kept us skirting the outside of the inner circles.

That tippy social balance was what I wanted to achieve in A Rogue in Sheep’s Clothing and in the three subsequent novels (one for each sister) in the series. (The second book, His Lordship’s Darkest Secret, is due out in November.) Ellie longs for social acceptance, but having grown up a wild thing, she finds it too constricting. She is forever on a tightrope between getting what she wants and social ruin. That was me then, and though the edges have been smoothed, I’m still the tame-less artist darting through the social jungle.

Blurb for A ROGUE IN SHEEP'S CLOTHING:

In Lord Hugh Davenport’s opinion, women of the ton perpetually hide behind a mask of deception. That’s hard for Ellie Albright, the daughter of an earl, to swallow—especially since she’s disguised herself as a stable hand to get back the prized stallion her father sold to Hugh to pay a debt. If Hugh learns her true identity she’ll lose the horse and her family will go bankrupt. Somehow, though, losing Hugh’s affection is beginning to seem even worse.

Already only a step away from being snagged in her own web of lies, Ellie’s deceit threatens to spin out of control when Hugh’s mother invites Ellie and her sisters to a house party. Now Ellie has to scramble to keep Hugh from knowing she’s the stable girl he wants to marry, while simultaneously trying to win his trust as herself. Can she keep her costumes straight long enough to save her family? And even if she does, will it be worth losing his love?

Ellie eyed the splattered front of her gown. “Now look what you’ve done. I’m a mess.”
The beast yanked a crumpled handkerchief from his pocket. “Use this,” he said, accidentally brushing her breast.
Ellie shied from his touch. “My Heavens, sir, cease and desist! Now, give me your handkerchief, slowly.” As she took the linen square, her hand halted in midair. The sour look she intended for her assailant melted. La, what a handsome man. And then she realized she’d seen him before, but where? Dark eyes, nearly black, met her own, a hooked curl bisected his forehead, meeting the edge of a scar that crossed the ruddy crest of his right cheek.
I’m staring. Quickly she pretended to swab a spot of wine at her waist. Her breath went shallow and her thoughts scattered, but a smile tipped the corners of her lips. She’d had the great good fortune to be trod upon by one of Devon’s most elusive bachelors, Hugh Davenport, Earl of Bruxburton – one of the few gentlemen who’d failed to call at Fairland. A pulse of pain reminded her of her foot. “I … I think I need to sit down,” she told him.
“Ah yes…” said Hugh, looking for an empty chair.
Putting the tiniest bit of weight down, Ellie received a powerful jolt. “I’m afraid I’ll not be dancing again this evening.”
Hugh’s back straightened and a hard look seeped into his eyes. Is he annoyed? she wondered.
“Well, there must be a chair here somewhere.” He moved off on the hunt.
Ellie took a few limping steps after him. “I’ll need your assistance.” He came back and eyed her suspiciously. “Your arm, in fact,” she told him.
His lips hardened, but he looped her arm through his. As they passed a row of seated grande dams, every eye watched with envy.
At an alcove, Hugh stopped to let her pass. “In here,” he said.
“I can’t go in there alone with you.”
“Did you see a free chair on the floor?” he said. “Because what I saw was a row of plump sugar plums, and none of them likely to abandon her seat.”
“People will say I’ve been compromised.”
“Nonsense. I couldn’t possibly compromise anyone in an alcove shielded by a simple palm tree. A young lady compromised in such a manner either wants to be or wants to pretend she was. Which one are you?”

Elf Ahearn, yes that is her real name, lives in New York with her wonderful husband and a pesky cat named Sufie, who believes she’s the inspiration for all of Elf’s books. (However, she is really a charming and persuasive distraction from writing, cooking, cleaning and doing the laundry.) Learn more about Elf at elfahearn.com or on Facebook. Learn more about Sufie by subscribing to The Writer’s Cat—a very infrequent newsletter about writing and apricot tabbies.

A Rogue in Sheep’s Clothing
Buy Link:
http://tinyurl.com/ju688me
Posted by Jana Richards at 12:30 AM