In the Spotlight: Nell Castle and A LEAP OF FAITH

My guest today is Nell Castle, and she's here with the blurb and an excerpt from her new release A LEAP OF FAITH. Please welcome Nell Castle! 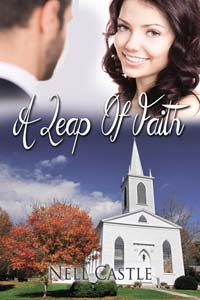 A Leap of Faith blurb:

Special events coordinator Sophia Anton is an old-fashioned girl. She wants a family by the time she’s 30, and she’s set her sights on an old friend. She just needs to lose 50 pounds, fast. But Jackson Thomas, the handsome new minister in town, turns her head to unexpected possibilities. Trouble is, Jackson’s taken a vow of celibacy, while Sophia’s scheme to snag the “man of her dreams” is working like a charm. So why does Jackson’s face haunt her when she closes her eyes? And how can Jackson dream of a future with Sophia after he’s shut the door on love?

Sophia closed her eyes for Christopher’s kiss. He had perfect technical skills, synchronizing every movement of his hand through her hair to the unhurried rhythm of his lips. The trouble was, she felt like an onlooker to her own make-out session. She’d longed for this moment for two years. What was wrong with her?

Closing her eyes again, she slid back into the memory of Jackson's embrace—his rough jawline rubbing against the soft skin of her cheek, pulling her mouth towards his. She felt again the riptide of longing he unleashed with just one movement…

Her kiss became more urgent. She could feel Jackson's mouth on her throat now, his fingers caressing her skin, as she entered the fantasy more deeply. She sighed as Jackson’s hands slid down her bare arms. The thin skin over the palm of her hand tingled as his long fingers traced a delicate pattern. She shivered when he raised her palm to his lips, gazing into his tender, dark eyes.

She met his ardor with her own, folding herself into his strong arms until her heart pounded against his. On this night, their love united them into one spirit, one body—

“Sophia?” Christopher’s voice came from far away. When she opened her eyes, she plunged back into Christopher’s apartment. He’d fallen back on his elbows, his hands flat against the floor. She scrambled to sit up.

Christopher’s hand on her leg restrained her. “I didn't mean stop you. I just-I just needed a breather.” He gave a shaky laugh.

Closing her eyes, she obscured her face with a curtain of hair. The disappointment of finding herself with Christopher instead swept through her like a hurricane wind. She struggled to calm her breathing before speaking. “I shouldn’t have had so much wine.” What kind of person kissed one man while she was thinking of another?

He grasped her hand, staring toward the ceiling. “After all these years of being such good friends”—he squeezed her hand—“maybe it's time to move to the next level.” He leaned over and bumped his shoulder against hers. “What are you thinking?”

That I'm going to Hell. She pressed her fingers miserably against her temples, attempting to erase her desire for the minister and substitute it with Christopher's presence. After months of trying to win this man's heart, how could she hesitate now, when the finish line was finally in sight?

A  Leap of Faith buy links: 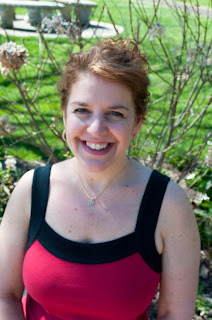 Nell Castle grew up in western Pennsylvania and graduated from Temple University in Philadelphia. Since then, she’s lived in Key West, Anchorage, Sarasota, and Virginia Beach. She moved back to northeastern Ohio to raise her kids closer to the family homestead but looks forward to moving to a gentler climate after her youngest graduates. Until then, she revisits white powder beaches and craggy mountain tops only in her writing. She’s submitted a new manuscript to her publisher, The Wild Rose Press, and is currently at work on a novella.
Posted by Jana Richards at 12:30 AM