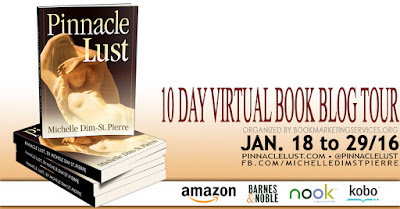 I'm hosting Michelle Dim-St. Pierre today as part of her blog tour for her recently released book PINNACLE LUST, Book one in the Pinnacle series. Please help me welcome Michelle to Journeys with Jana!

How Much is Fiction Actually Fiction
Michelle Dim-St. Pierre

What makes a work of fiction actually fiction?

By definition, a work of fiction is derived from imagination. Fictional characters do not represent actual people and descriptions are completely invented from the writer’s mind. Or that is what is believed to be true.

However, in reality the lines are much more blurred.

Take, for example, a historical fiction novel, which places imaginary characters into real life historical events. Provided the writer has done his research, much about the event should be accurate—times, dates, geography, specific details. Yet the characters in the story didn’t actually exist. So it isn’t a true event and cannot be labeled non-fiction. Yet these types of stories hold a great deal of value to students as they present history in an engaging way. From thorough research, a writer can imagine how a person might have felt, how they might have acted, and what they may have done. Would they closely resemble a person who actually existed? Possibly.

This type of situation occurs all the time with modern day fiction.

As a writer, I constantly research locations, events, and specific details that make an area unique. The small details are what can make a scene come alive in the reader’s imagination and I aim to make the details as accurate as possible.

I am a woman. I am a nurse. I’ve served in the military. I live life on a daily basis.

While my characters may be products of my imagination, they take on a life based on who I am, what I know, what I’ve learned and what I’ve researched. They are an extension of some part of me and my experiences. Or they may be a composite of several personalities I’ve come across in my life.

Some people ask me if a particular character is them—if they are in my story. Well, no, my characters are never one particular person. That isn’t to say that they don’t form a small part of my character, some detail that I noticed, some phrase that they use, the way they hold their head when they think. A writer notices these small details and keeps a mental catalogue for later.

So the next time you are in line at the grocery store, ignoring your child while you text on your phone or bopping to the latest hits on your ipod, remember you never know who is watching.

So who is to say. Is that fiction? Is that reality?

Is there really any other way? 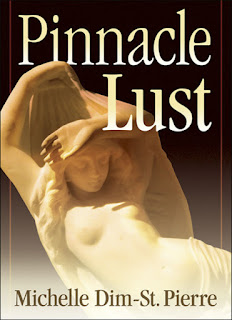 In a Tel-Aviv hospital during Operation Desert Storm, Sharon Lapidot, a beautiful young nurse, is having an affair with a married doctor.

Sharon’s colorful and exciting life is ultimately destroyed by powerful and eroding mistakes. But her courage and wisdom lead her to an unregretful commitment.

Vividly told, this compelling journey of love and lust, honor and betrayal, loss and redemption, will move you — and perhaps even change you.

While in the Neonatal Intensive Care Unit, I took the newborn babies off the ventilator and attached the little endotracheal tubes, which were inserted in their mouths, to the Ambu bag. I delivered the first two breaths, making sure enough oxygen was delivered to these little ones. Only then did I shut off any valves to the exterior lines, while continuing to deliver oxygen through the Ambu bag—all for the sake of eliminating any potential contact with outside air if missiles damaged the lines. I continued to deliver breath after breath, while making sure not to hyperventilate these newborns.
Their lives were literally in my hands.

I watched my colleagues and realized that none of us were wearing the nuclear-biological-chemical masks. It hit me hard when I realized that no one had bothered to place the newborns in the MAMATs. It all happened too fast. I wondered what my co-workers were thinking about. I wondered what would happen if a missile landed close to the building. Would it shatter the windows that no one had taped? Would a million pieces of glass fly into this big open space? How many of us would get hurt? I was upset with the hospital administration for their ignorance. How could they leave these huge windows like that? My thoughts were disturbed by a loud whistle.

Seconds later, a huge fireball flashed by the window. A scud missile, the first one I’d ever seen. It looked as if the sun was falling from the sky. The bomb blast followed just a few seconds later. I looked around and saw these babies, lying in their own, individual cradles and incubators. They didn’t seem bothered. Their future was questionable regardless of the war. Right after the all-clear siren sounded, I made sure each newborn was secured back on his or her vent and that the equipment was functioning properly.

My drive home from work was uncomfortable. It felt like driving through a ghost town. No one was on the street. Coffee shops and restaurants had closed their doors and switched off the lights. Only a few other cars shared the road with me. I ignored the traffic signals and ran red lights. There were no rules at the moment—not for me, anyway. It was quiet—like everyone knew there was more to come. And it did. 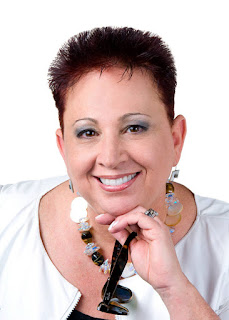 Michelle Dim-St. Pierre was born in Tel-Aviv, Israel, where she spent more than half of her life before relocating to the United States.

She lived through four wars and served in the Israel Defense Forces for two years. Unlike her first year of service in an armored division in the Golan Heights, she spent her second year serving in the medical corps where she interacted directly with the injured soldiers of the Peace of Galilee war and their families. This interaction, along with the exposure to the hospital atmosphere, fascinated Michelle and further touched her heart.

After graduating from nursing school with a BS in Nursing in Tel-Aviv, she practiced internationally for 32 years in various positions in the surgical field and quickly advanced into health care administration. During her career she worked in the Operating Room, Recovery Room, and CCU – along with many other duties.

Writing was Michelle’s outlet at first, but it soon became her passion. Recently she left nursing and became a full-time writer. Her international background, along with her military and nursing experience is always at the tip of her pen. Her first novel, Pinnacle Lust, starts the Pinnacle trilogy.

Where to Purchase Pinnacle Lust:

Kobo: https://store.kobobooks.com/en-US/ebook/pinnacle-lust
Posted by Jana Richards at 12:30 AM