A Sneak Peek at Burning Love 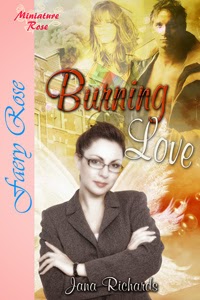 It's great to be back at Sneak Peek Sunday! Today I'm featuring BURNING LOVE, a contemporary romance with touches of humor and the paranormal, in the form of two meddling angels! Here's the blurb:

Riley looked into her beautiful blue eyes and her smiling face and did the only thing he was capable of doing at the moment. He kissed her.

Maybe later, he told himself, when sanity returned, he’d think of a hundred reasons why pulling Iris into his arms, holding her tightly against his body, and plundering her soft, sweet mouth was not a good idea. But for now, right now, as she wound her arms around his neck and made tiny sounds of excitement deep in her throat, it felt exactly right.

Heaven.  Having Iris in his corner made him believe everything was possible.

He stepped backwards towards the stairs, pulling Iris with him, intent on taking her to upstairs to his room.  He suddenly tripped, nearly losing his balance. He glanced behind him and saw the object he’d stumbled over. A set of luggage sat next to the stairs, still bearing tags from the retailer.

Return to the Sneak Peek Sunday website for more great snippets!
Posted by Jana Richards at 12:30 AM