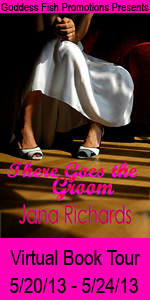 When Zach Morrison was dumped at his wedding, Dani was there to help him through the humiliation. A year later they meet again and once more Zach needs her help. To fend off the unwanted attentions of his former fiancé, he asks Dani to pretend to be his girlfriend. They both play their roles a little too well, and make-believe turns into reality. Their invented relationship comes crashing down when Zach's trust issues cause him to accuse Dani of cheating. Telling the truth means that Dani will betray a friend, something she will never do. But keeping her secrets means she may be destined to remain a bridesmaid forever.
All the best,
Jana
Posted by Jana Richards at 10:50 AM