Here's a snippet from CHILD OF MINE, book 1 in my Masonville small town romance series. CHILD OF MINE is on sale at Amazon for .99 cents until January 20! https://www.amazon.com/Child-Mine-Masonville-Book-1-ebook/dp/B07MBVK9LY 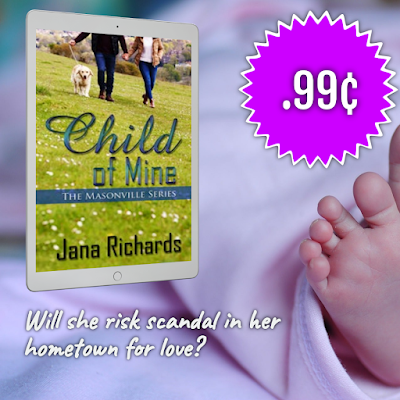 "You mean everything to me. I love you.”

She shook her head. “You don’t love me, not really. I’m nothing more than a responsibility to you.”

“Don’t tell me how I feel.” Desperation turned to anger in a flash. Cole jumped to his feet and began to pace. “I’ve been in love with you since I was sixteen years old, but you never saw me, not really. You only had eyes for Billy. It nearly killed me when you married him, but I stuffed down my anger and hurt and congratulated both of you, because really, what else could I do?”

“It’s true, all right. I wish to God it wasn’t. I tried to push away my feelings for you, tried to love other women, but none of them were you. None of them compared to you. I thought I’d get over you, but I never did.”

Her eyes were wide with shock. “Cole—”

“Billy guessed the truth. I found out he’d been cheating on you, and I confronted him. We had a huge fight, beat each other till we were both bloody. He told me I was jealous because you’d rejected me. He said you’d never want me, that you’d always be tied to him, no matter what happened. And he was right.” He gave a bark of mirthless laughter. “He’s dead and he still comes between us.”

Posted by Jana Richards at 9:48 PM